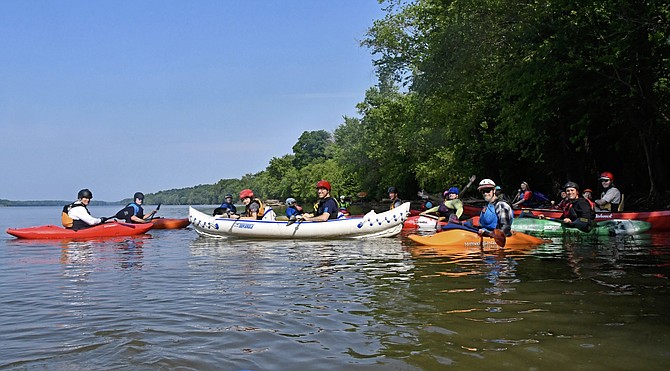 The Canoe Cruisers Association hosts an ongoing Sunday morning paddle from Violettes Lock around the GW Canal Loop and back to Violettes on the recently rewatered C&O Canal. Photo by Barbara Brown

The Canoe Cruisers Association was recognized as the 2019 ACA Green Paddle Award Winner for Waterway Conservation. The award cited the local group’s legal victory compelling the U.S. Coast Guard to ensure that there is no prohibition of reliable, predictable and continuous access to the Potomac waterways around the privately-owned members-only Trump National Golf Club.

Only one such award is presented each year, for "an outstanding contribution to paddlesport by protecting America's waterways."

The Canoe Cruisers Association lawsuit win was a result of two-plus years of work including more than 600 supportive comments to the U.S. Coast Guard from CCA members and others who use that important stretch of the Potomac River.

In March, Democracy Forward announced victory in the lawsuit against the Trump Administration for illegally restricting access to the Potomac River when the President is golfing at his Virginia golf course.

That course borders the Potomac River across from Riley’s Lock, where Seneca Creek empties into the Potomac, a much-used section of the river for local paddlers.

“The Canoe Cruisers Association of Greater Washington DC and Democracy Forward are claiming a major victory in their lawsuit against the U.S. Department of Homeland Security. Prompted by the groups’ suit, the Coast Guard issued a new directive that revises the Potomac River security zone that it previously established in order to accommodate President Trump’s frequent outings at the Trump National Golf Club. Democracy Forward and the Canoe Cruisers Association filed suit in September [2018] charging that the Administration had unlawfully created a permanent security zone that blocked the public’s legal right to access and enjoy the Potomac River when the President golfs. Yesterday, after more than a year of legal and public pressure from the Canoe Cruisers and others in the paddling and conservation community, the administration reversed course and issued an updated interim final rule that meets nearly all of the groups’ demands,” said Democracy forward in March. “The permanent security zone rule this new rule replaces was illegal for failing to account for the serious impact it had on the rights of those, like Canoe Cruisers, who frequently utilize the two-mile stretch of the Potomac River in the vicinity of the Trump National Golf Club, and for failing to provide the public with notice or an opportunity to comment.”

The lawsuit and victory were covered in the Washington Post, New York Times, AP, USA Today, Bloomberg, Stars and Stripes, Outside Magazine, Canoe & Kayak, and local papers in almost every state. It was also mentioned through news outlets in Canada, France, India, Singapore, Malaysia, and many other countries in multiple languages.

Green Paddle Award past year winners include very effective and well-respected members of our national river community. Barbara Brown, president of Canoe Cruisers Association said, the group is honored to be among such an outstanding list of honorees.

The legal victory - and this ACA Award - would not have been possible without the support and participation of the Board, members, and wider Potomac River family including Team River Runner, and Calleva, Brown said. They are especially grateful to the nonprofit law organization Democracy Forward for representing them in court 'pro bono'.