One School, One City in Alexandria
Votes

One School, One City in Alexandria 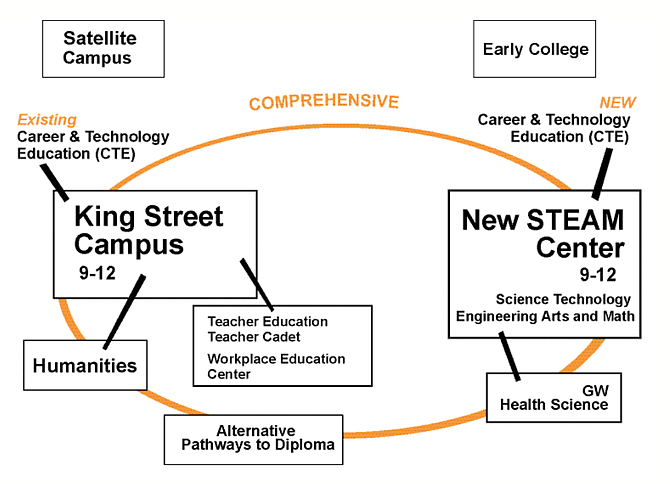 Developed in August, this programming model includes the King Street campus and a new STEAM center to focus on science, technology, engineering, arts and math. The STEAM center would draw out some science and technology courses from T.C. Williams to create a separate academic track for students, along with an expanded career and technical education program. Students who want to become teachers would take advantage of the Teacher Cadet program, which would expose them to more opportunities in education. A satellite campus and the Northern Virginia Community College early college program would be part of the connected high school. Source: Alexandria City Public Schools. Graphic by Michael Lee Pope

T.C. Williams High School has a capacity of 3,000 students, although it now has more than 4,000 students.

T.C. Williams High School is facing a crush of 5,000 students, cramming so many students into an overcrowded facility that school officials were considering a plan to create a second high school.

School Board members rejected that idea in a six-to-three vote last week, approving a plan to expand the existing footprint at the nearby Minnie Howard campus and create what administrators call a “connected” high school.

The debate over the future of T.C. Williams has been red hot for more than a year, as school administrators heard from students who wanted two schools and parents who wanted to Remember the Titans.

After a year of debate and discussion, two options were under consideration: One expanded the current high school with multiple satellite campuses throughout the city; the other created two separate high schools.

“I’m not naive to the idea that building a second high school would mean basically going to war,” said School Board member Meagan Alderton, who represents the West End and was one of the three votres against expanding T.C. instead of building a new school. "It would require outstanding courage, fierce confrontation and massive resistance.”

Preferences between one high school and another were split.

A considerable number of teachers, students and their parents strongly supported one high school to instill the brand of T.C. as well as keep the student body together and united. They worried that two high schools would cause segregation and socioeconomic inequities.

"Even if you believe you can keep diversity in dividing things up into two schools, that is not the way to go," said Laura Sacher, parent of a former Titan who graduated in 2019. "Let our city become a model of how to grow in a creative, exciting, future-oriented way. Do not stunt what rich diversity this city has by cutting it up.’"

Several current students from elementary, middle and high school testified in favor of one high school, along with the T.C. Williams principal. The younger students, such as the future T.C. Class of 2029, acknowledged that this decision would impact their high school experience for years to come.

"The connected high school would solve many of our problems while also taking every student’s learning experience to a whole other level," said T.C. junior Lorraine Johnson.

Others argued that two separate high schools would be more cost effective, avoiding all the transportation costs of shuttling students from one campus to another. Some argued that smaller schools would allow for more one-on-one attention for students, who would benefit from being larger fish in a smaller pond.

“A connected high school is likely to leave us overcrowded in the near future with no room to grow,” said School Board member Michelle Rief. “Inequities may actually get worse and we’ll likely be back here in ten years trying to decide if we should build a second high school. Only this time, inflation will have raised the cost to $268 million.”

A recurring theme throughout the yearlong debate was educational access for all racial and socioeconomic groups. T.C. Williams has 400 available courses, and school administrators say they want to maximize what the school had to offer.

"I can tell you first hand that our approach to multiple campuses is working," said T.C. Williams Principal Peter Balas in his testimony. "We have strengthened the connection between campuses, and as one school, we can continue to offer students what many other places simply cannot."

The new high school would expand the Minnie Howard campus of T.C. Williams to house 1,600 students and students would get bussed over to the main campus throughout the day. The total high school population would total 4,400 students, according to school officials.

A total of $119 million is budgeted for the High School Project for FY2020 and FY2021, according to the recently adopted Capital Improvement Program. As for transportation costs, administrators assume they will compare to current T.C. transport costs, accounting for more students and depending on where the new building would be.

Voted Against One High School:

Voted for One High School: