In the Kitchen with Chef Abiy Bisrat at Enat
Votes

In the Kitchen with Chef Abiy Bisrat at Enat 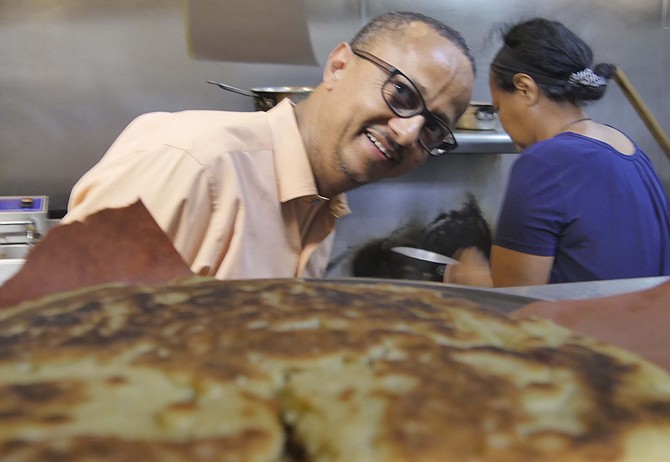 Bread is served with every dish and used traditionally instead of a fork at Enat. Photo by Shirley Ruhe.

Kitfo served with farmer’s cheese and collard greens at Enat.

It is mid-afternoon on Friday and several men play pool in the corner while a couple of others drink a beer at a nearby table. Ethiopian music reverberates through the dining room. In the kitchen vegetable samosas sit in the deep fryer while a large pot of ground beef has been cooking since 10 a.m. and keie, mild lamb stew, simmers on the front burner.

Abiy Bisrat, chef and owner of Enat Ethiopian restaurant with his wife, is preparing an order of kitfo to order.

"This is the most popular dish here and my favorite. It is a European steak tartar." Bisrat pulls out 11 ounces of ground top round and puts it into a pan to heat a little.

He hand mixes the ground meat with 1 ounce of clarified butter with herbs and 1 heaping tsp. of mitmita (a spicy chili powder.) Bisrat says the meat has no fat, no gristle. It is combined with clarified butter mixed with ground green and white tea, coriander and a green leafy herb that looks similar to oregano but isn't.

"Smell it." It has a little longer leaf and has a bit of a smoky aroma. "I don't know how to tell you the name. I get it from Ethiopia; it would be a lot cheaper if it was oregano." He has made the clarified butter by melting the butter and skimming the froth from the top. "You cook it without burning it. No rush."

"This tartar was ordered medium but traditionally it is served very rare." Bisrat doesn't cook the meat but puts it over the burner briefly to raise the temperature. Bisrat places the meat in a large bowl to serve. He puts a large portion of homemade farmer's cheese mixed with mitmita "to give it the red color" on the top of the meat alongside a portion of collard greens with mitmita and herb butter. Mitmita in everything?

"Well, almost, but not everything."

Mitmita is made of ground African bird's eye chili peppers, cardamom seed, cloves, and sometimes other spices like cinnamon, cumin, and ginger.

On another burner he is preparing collard greens, which have been roughly chopped, rinsed and drained. He turns the temperature under the pan to high.

"They will cook for half an hour but on high just for now." The next step is to add a handful of sliced white onions, two large scoops of chopped garlic, a sprinkle of ground cardamom and salt.

Bisrat turns the temperature down to medium and adds about a cup of water. "I will add the beef and mitmita in 5 minutes and cover it up to let the collard greens cook through. It cooks for a while."

When it is ready to serve, Bisrat places a 24" piece of injera (Ethiopian bread) in a large bowl, spoons the collard greens into the center and partly folds in the sides of the bread. He says, "Our rule is one piece of injera, but they like it so much, we overdo it." Traditionally Ethiopian food is eaten with the bread instead of a fork. "But we do have forks if someone requests it."

He says he uses about 50-60 pieces of this Ethiopian bread a day. "It is just water mixed with an indigenous Ethiopian grain, tef. And the herbs are sun dried. We try to be as authentic as possible."

Meanwhile he mixes sautéed tomatoes, onions, garlic, red chili pepper, and coriander with pieces of broken injera and serves it in a large bowl. "On Wednesdays and Fridays and during Lent he offers meatless dishes for those who practice in the Orthodox Church. "We make these meatless choices bigger."

Bisrat has been the owner and chef at Enat on Chambliss Street for ten years, but has lived in this area for 32 years. His father owned a hotel in Addis Ababa when he was a kid and he used to help there, mostly hanging around. Now he has three kids to feed and a passion for cooking.

Bisrat says people are getting more carb-conscious, but no Ethiopian dish is served without bread. What to do? He says, “Well, maybe you could try lamb stew with a spoon.”