Elks’ Goal to Save a Piece of Alexandria History
Votes

Elks’ Goal to Save a Piece of Alexandria History 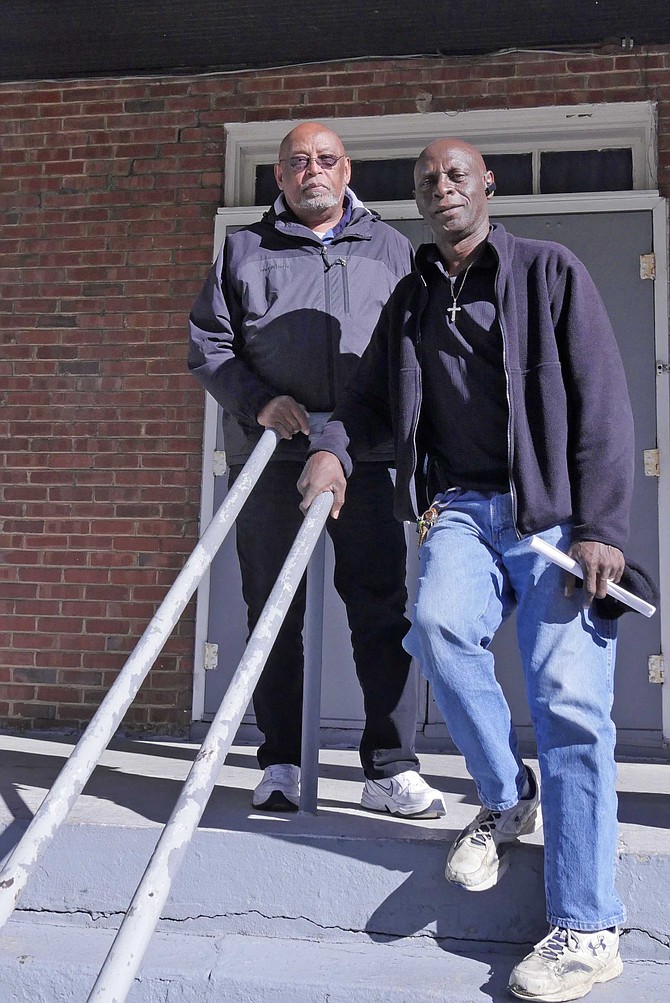 Harold Hughes, left, and Arthur Miller stand on the steps of historic Elks Lodge #48 built in 1898. Photo by Shirley Ruhe.

The lodge meeting room used to be a place where black soldiers came for entertainment by such celebrities as James Brown and Ray Charles. 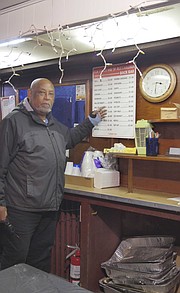 Hughes says the snack and beer menu in the grill is where the brothers head after their bi-monthly meetings.

Harold Hughes walks up the steps of Alexandria Elks Lodge #48 on 227 N. Henry Street and unlocks the door. "You can see the oldest part of the building is definitely in need of repair." Hughes, an Elks brother for 30 years says, "at one time there were 400 members in the lodge. Today we are down to 42." He says there is no retention with people up in age and no influx of youth. "It doesn't deter from our mission to the community but it is harder to complete."

The historic building was built in 1898. Arthur Miller Sr., a more recent Elks member, says, "It wasn't until recently that the City even knew the building was there or about its history." Hughes adds, "Then to tell the whole truth it was lack of our knowledge that led to 50 years of neglect. We misunderstood the grandfather clause and thought it meant you had to go downtown to get anything repaired, even a window, so it held up progress."

"We also thought an application had been filed for historical landmark designation, but it hadn’t.”

Melanie Gray, Director of Outreach and Mission at Historic Christ Church, says the lodge is still functioning. "The city architect recently saw great potential in rehab and maybe converting part of the building into 8 units of affordable housing. There is a quote of $16,000 for design."

But then what next?

Gray has been interested in pulling people together to work toward a plan for saving and renovating the lodge. Gray says she has a love of local history and believes in the need for preservation of heritage in Alexandria. "We go back generations here. My family owned a block of King Street. There was a pig farm there."

Hughes says, “Melanie is like our North Star. She is trying to help us help Ourselves.” Up the front steps inside the front door on the right is the ladies’ room and on the left is the gentlemen's room. The daughters of Israel Temple No. 138, who meet separately, also have 42 members. Straight ahead is the current official lodge meeting room with the American flag prominently displayed and a stuffed elk head mounted on the wall. But the ceiling is crumbling. Miller says, "It is desperately in need of repair."

Hughes says, "this is where the black soldiers used to come and party. They couldn't go anywhere else." He adds, "there used to be a bar here and tables. We had so many celebrities including Ray Charles and James Brown." A bulletin board downstairs displays yellowed and fading pictures of special events for decades that took place in the lodge. “We try to preserve what we can.”

In the upper corner of the bulletin board is a picture of the Thanksgiving baskets which used to be delivered to the needy. "But we discovered some people were left out so we started to make a luncheon and invite people," Hughes explains.

This year will be the 37th year for the annual Elks Thanksgiving luncheon for seniors in the community which usually draws 200 people.

“But this will be our first year we will have the lunch without the people who started it. They recently passed,” Hughes adds.

Down a set of buckling wooden stairs is the member's room only with a pool table, a wall sign advertising choices of beer and a few snack items while a dusty non- working jukebox sits in the corner. It is filled with tunes like "Let's Start the Dance," and "Our Love," by Natalie Cole.

"Over here," Hughes says, "is a working telephone booth. Put in a quarter. It still rings."

Up on the second floor they walk into a spacious community room where most large events are held. "The gentlemen's coat room is over there." White paint is peeling off the ceiling revealing the original tin ceiling squares underneath. The walls are dusty and gray with memories. But it doesn't stop the Elk’s enthusiasm behind their commitment to the vulnerable in the community. Hughes points to the original kitchen adjoining the community room. "But someone decided to replace the old stove, which had a hood, with a more modern kitchen stove, but without a hood. The city had a different idea so now the kitchen is inoperable."

Now until they get a renovation they can't feed anyone but the brothers and the sisters. When they hold their special Christmas dinner where they present gifts to an adopted family, the women cook the food at home and bring it to serve there. As Gray says, "So much history here to preserve and a renovation could reinvigorate the mission."