Vienna’s Night of Tradition and Fun 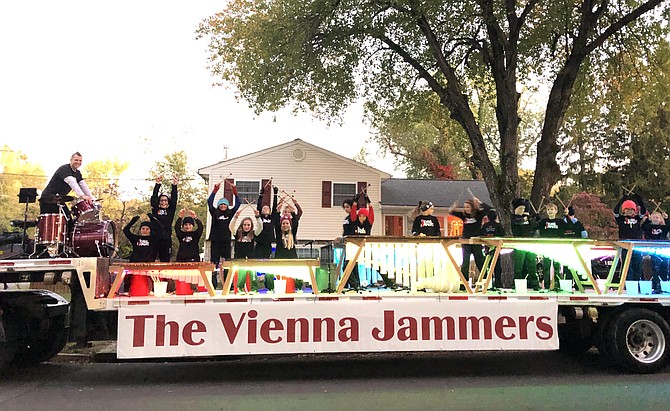 The Vienna Jammers play their instruments on a giant truck bed. Photo by Lisa Fay/The Connection

The Kena Highlanders performed typical Scottish songs on their bagpipes.

Kids dressed up as Nationals players while exercising atop Evolution Fitness’s float.

An optical office took their name literally and dressed up as eyeballs.

It is that time of year again when the leaves start to change and there’s a crisp air that smells like cinnamon apples. But this year was a little bit different. As many wolves, supermen, and witches were walking the streets of Vienna, there were also as many mini Nationals players hooting and hollering as the Washington Nationals made their way to the World Series. Atop the Evolution Fitness float there were kids wearning Nats uniforms, riding exercise bicycles; and Nats hats and jerseys were an addition to many costumes. Even as the home team was making their way to the plate, Vienna residents still showed up in their Halloween best to celebrate an event that is more than 70 years old. Carey Sienicki served as Grand Marshall and announced Vienna businesses and associations as they passed the Town Green on Maple Avenue. As the Nationals won their second World Series game, Vienna was doing what it does best: bringing together its people for a night of tradition and fun in the town’s Halloween Parade.