Unique Plays Appealing to Teens and Adults in Chantilly
Votes

Unique Plays Appealing to Teens and Adults in Chantilly 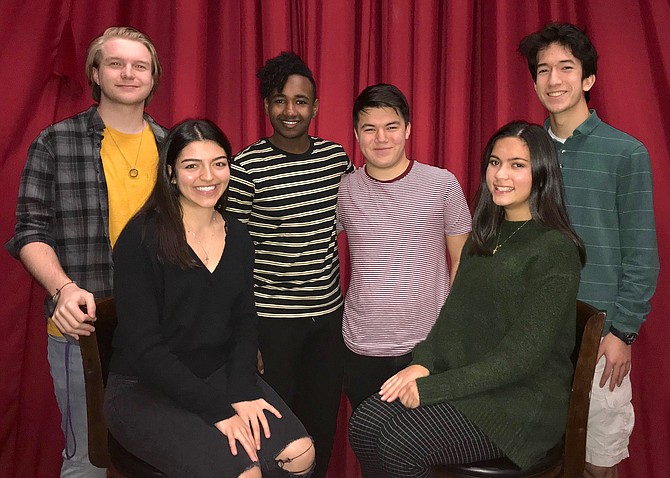 The shows feature a cast and crew of 65 people total. And what makes them unique is that each play comprises nine individual two-person vignettes that stand on their own. So, said Director Shannon Spicer, “This is a completely different directing process, because each scene has no relation to the other scenes. So I can only work with two actors at a time – which makes for an interesting rehearsal schedule.”

Still, she said, “Things are coming along great. I chose to do two plays because we have a wonderfully talented and diverse group of actors who can pull off these two, contrasting plays. I love directing contemporary pieces because I feel they really reach out to the high-school audience, as well as the community.”

Spicer called the writing both delicate and powerful, at the same time. “It’s challenging for the actors to create these believable moments because part of their job is to make sure the audience sees themselves in these plays,” she said. “But I guarantee that each audience member will find themselves in either one of the characters or in one of the moments in time.”

IN “LOVE/SICK,” junior Yana Kuptsova portrays Louise Overbee. “She’s a very energetic woman who likes to go, go, go,” said Kuptsova. “She’s also outgoing and the life of the party, once you get to know her. She loves her boyfriend Gary and has their whole life planned out for them. She believes they’re going to get married someday.” Kuptsova likes playing Overbee because “She’s the complete opposite of me, so it was cool being in her shoes. And she goes through so many emotions onstage.”

As for the show, she said, “‘Love/Sick’ is a little darker than ‘Almost, Maine,’ but there are also fun bits and lots of humor in it. All the scenes in ‘Love/Sick’ take place on the same day, at the same time, but in different parts of the city. And since every scene is a different story, it’s not like a typical show and will be something new for the audience.”

Senior Jenna Antonacci plays Sandrine in “Almost, Maine” in the “Sad and Glad” vignette. “She’s a 25-year-old woman about to get married, and she runs into her ex-boyfriend at her bachelorette party,” explained Antonacci. “She feels bad for him because she’s a kindhearted, down-to-earth person. She’s an average person, trying to make everybody happy.”

Since Antonacci usually plays big, over-the-top characters, she’s enjoying playing “a real-type character with relatable feelings and situations. And her dialogue is the way people actually talk. Also, this is one of the few, comedic scenes in the show.”

She said audiences will like this play’s snowy, wintry setting, plus the characters’ warm clothing and puffy coats. And, she added, “Seeing characters onstage facing situations they’ve faced will be really refreshing for them.”

Portraying the ex-boyfriend, Jimmy, is senior Cullen Kendrick. “He puts on a brave, super-confident front – like he’s comfortable in his own skin – but he’s really not that way at all. And he’s really bad at pretending to be those things. He’s generally just nervous.”

Kendrick likes his role because “It introduces pure, awkward comedy. And it’s fun portraying someone just so uncomfortable because it’s so different from any other comedic role I’ve played before. Jimmy’s funny because he doesn’t know how to act around Sandrine and is oblivious about social norms and how people are supposed to interact.”

He said audiences will like this show because it’s “really funny, but also sincere about realistically portraying relationships, but in a different light. The playwright, John Cariani, is good at taking an absurd concept and grounding it in reality.”

SOPHOMORE Colin McLean is the stage manager for both plays, and he said the sets will vary from scene to scene, with different furniture and settings. For example, he said, “Some scenes take place outside at a frozen lake where a couple goes to ice skate. And different-colored lighting will add to the atmosphere of each scene.”

McLean is in charge of everything that happens onstage and makes sure all the furniture, set pieces, props and actors are where they’re supposed to be. And he gives cues for all scene changes. The toughest part, he said, is “dealing with the amount of movable set pieces, such as different doors, couches, chairs, tables, etc.” But he’s also glad to get the experience doing that.

Overall, said McLean, “The audience will like the shifts in the characters’ emotions – even within one scene – going from happy to sad to happy to sad. And even though the actors are high-schoolers, they’ve been able to figure out what love is like and how to portray it. And the way we illustrate how love evolves over time will appeal to both teens and adults.”