It would contain both assisted- and independent-living units. 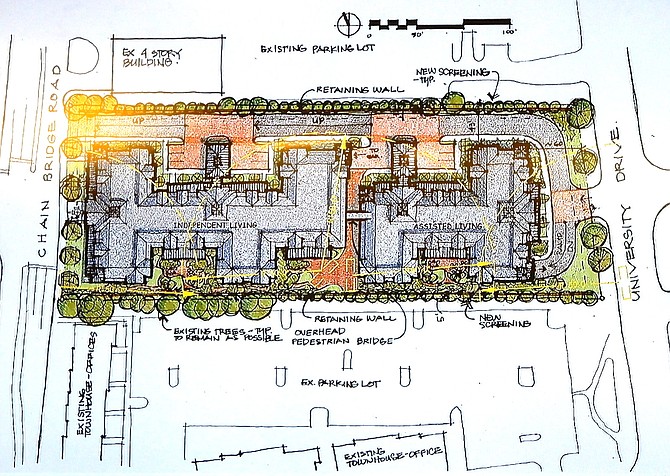 The conceptual plan for Sunrise Senior Living’s proposed new facility in the City.

Sunrise Senior Living wants to replace an existing, single-family home in Fairfax City with 80 assisted living and 80 independent living units. Built in 1916, the house is on 2.7 acres at University Drive and Chain Bridge Road.

And although a formal application hadn’t yet been submitted, Sunrise presented its design concept during the Fairfax City Council’s July 9 work session so it could receive some initial feedback on its proposal. If approved, it would require a rezoning from Residential Medium to Commercial Urban, plus a special-use permit to allow an assisted-living facility in the Commercial Urban district.

Proposed are two four-story buildings with both below-grade and surface parking. The independent-living units and dining hall would be on the site’s western portion, with the assisted-living units on the eastern part of the property. Each building would have its own entrances and drop-off areas and would be connected by a pedestrian bridge.

THE CONCEPTUAL PLAN shows two vehicle-access points on University Drive and Chain Bridge Road. But according to City staff’s preliminary analysis, the Chain Bridge Road entrance will have to be right-in, right-out, since it’s too close to the Judicial Drive traffic signal to allow left turns in or out. Staff also noted that “the steep grade up to Chain Bridge Road won’t be suitable for many vehicles and may severely limit the sight distance for exiting vehicles – perhaps to unacceptable levels.”

Councilwoman Jennifer Passey wanted to know how this facility would fit in “with our downtown visioning for that area.” Councilman Sang Yi asked how many residential properties could be built there, as is, and Community Development Division Chief Jason Sutphin said 15.6 units, plus internal streets and roads.

“So this proposal could yield three or four times the people as that,” said Yi. “Has staff talked with the applicant about the traffic effects on Chain Bridge Road?”

“Yes, but we need a traffic study,” replied Sutphin. “Assisted living has atypical hours and the staff works in shifts. Congregate [independent] living would be like multifamily; but due to the age range of the tenants, most would not be driving.”

Yi then requested a study to say how many vehicle trips the site would yield if developed as just residential, “so we’d have a baseline to compare it to. And if there were only ingress and egress on University, how would it affect the neighbors on Breckinridge [Lane]? I want that included in the study, too.”

“I don’t see inter-parcel connectivity,” added Councilman Jon Stehle. “And I wonder if this is what we want there in our downtown.”

However, Mayor David Meyer noted that “It’s a narrow site and difficult for a developer to maximize and to present something we’d be comfortable with. I think the key to its redevelopment are its effects on the parcels to the north, especially the BB&T Bank.”

Since the City’s Comprehensive Plan designates this site as a future activity center, Councilman Michael DeMarco asked what are “the right uses on this and the adjacent parcels? It’s hard for us to know what should go there when we don’t know what the future will be like in that area.”

Representing the applicant, Attorney Bob Brant said, “Sunrise sees this as an opportunity to expand our operations here in the City. There’s a real need and increasing demand for senior housing options here, and we see this as a way of meeting it. Our plans are still conceptual, and we’re very excited to be here.”

At the proposed site, he said, “We want to create an assisted-living place that would feel like home and provide assistance with dining, bathing, daily living and taking medications. The independent-living portion would provide meals and activities and the ability for people to age in place and [later] move into either the assisted-living or memory-care sections.”

Liang said their residents are approximately 85 years old. The difference between who’s in which section is their physical health. “We now have 17 Sunrises in Northern Virginia and are still expanding,” he said. “Occupancies are strong because of the high demand and because we’re one of the best. We foresee a silver tsunami and a growing need for senior housing options. Our unique, design elements match the characteristics of the local area, and our interiors are bright and clean.”

Brant said the proposed City site’s downtown location “is an asset to both the businesses and [future Sunrise] residents. Seniors want to be in downtown areas where they have access to all their amenities. We envision Chain Bridge Road as Sunrise’s secondary access and University Drive as the primary one.”

“There’d be east-west connectivity with a pedestrian connection along our northern side, between University and Chain Bridge,” he continued. “We’d have permanent landscaping around [the facility] and predominantly two-level, below-grade, parking garages. And we’d make sure this fits in with the fabric of the City and with the scale ad proportions of other buildings there.”

Furthermore, said Brant, “This would activate an underused property and would significantly add to the City’s commercial tax base. It would be a catalyst for future development in the City, and we’ll reach out to the neighbors to talk with them.” Liang said Sunrise will keep managing its existing facility at School Street and George Mason Boulevard on behalf of Inova; but eventually, the new facility, if approved, would replace it.

COUNCILWOMAN So Lim asked how many Sunrise residents would eat in Fairfax’s restaurants. “Our independent-living is rental and comes with one or two meals a day,” answered Liang. “But our residents also like to dine out.”

DeMarco asked why they want 160 units here, and Liang said it’s because there aren’t many independent-living options for people in Northern Virginia, but Sunrise is flexible on the number. “We know there’s an abundant need for assisted living,” he added. “And we’re confident there’ll be a demand for independent living, too, to serve the front end of the aging baby boomers.”

“But it’s not that close to downtown, so would you put in some retail for the residents and neighbors?” asked DeMarco. Liang said they don’t usually, but would consider it. DeMarco also asked if the 1916 house could be incorporated into the site, and Liang said it’s possible.

However, said Yi, “I’m worried about our City’s density. Chain Bridge, University and Old Lee [Highway] are our only north-south roads. With this project and Capstone, it would increase the City’s density by 4 percent within a few blocks, along a main road. And no one’s mentioned traffic mitigation; so, for me, 160 people is a nonstarter.”

He also asked what percentage of Sunrise’s residents come from the area where its facilities are located. “About 50 percent or more,” replied Liang. “And here, we’d expect 50-75 percent would come from a 3-mile range.”

Liang said family members use assisted living for asset spend-down, and the City’s demographic profile indicates it would work well here. But, said Yi, “I’m still concerned about density and traffic, so I ask you to rethink the density.”