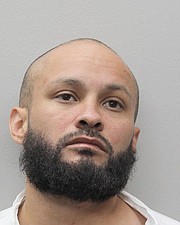 Manuel Casco, 34, charged with robbery, carjacking and two counts of use of a firearm in the commission of a felony. 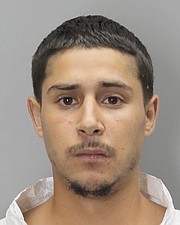 Fairfax County Police Department (FCPD) reported the arrests of Edward Raul Mejia Sandoval, 22, and Manuel Enrique Casco, 34, both of Maryland. They were arrested after robbing a local business shortly after 7 p.m. on Sept. 2 in the 700 block of Elden Street in the Town of Herndon, according to police reports.

According to a briefing given by Chief Maggie DeBoard, Town of Herndon Police during the Town of Herndon Work Session held Sept. 3, an officer was sitting in his cruiser doing follow up paperwork behind the fire station at that time. "There was an armed robbery that had just occurred, up in one of those businesses in that area," DeBoard said. She added there were two victims in the business.

"[One] noticed that the officer's cruiser was parked outside through a security camera and was able to run down and alert the officer … the officer immediately engaged them," said DeBoard. She said that the officer got in a foot pursuit with both subjects. "As he was chasing the subjects, giving them verbal commands, one of the suspects actually turned and fired rounds at our officer and our officer returned fire back. Nobody was hit thankfully either way, which is always a good thing."

FCPD reported Mejia Sandoval was quickly taken into custody by Herndon police officers while Casco was arrested a short time later after an armed carjacking in the 1000 block of Elden Street. "A handgun was recovered during the initial investigation."

As this is an active investigation, detectives continue to investigate the circumstances of the crimes. FCPD requests, anyone who may have witnessed this incident or has information about this investigation is asked to contact Major Crimes Bureau at 703-246-7800. Tips can also be submitted anonymously through Crime Solvers by phone – 1-866-411-TIPS (866-411-8477), by text – Type "FCCS" plus tip to 847411, and by web- p411.com/tips/new?alert_group_id=21984. Download Mobile tip411 App, "Fairfax Co Crime Solvers." Anonymous tipsters are eligible for cash rewards of $100 to $1,000 if their information leads to an arrest.