Recognized for 130 Brave and Spectacular Years in Herndon
Votes

Recognized for 130 Brave and Spectacular Years in Herndon

Herndon Fortnightly Club continues to do work that really matters. 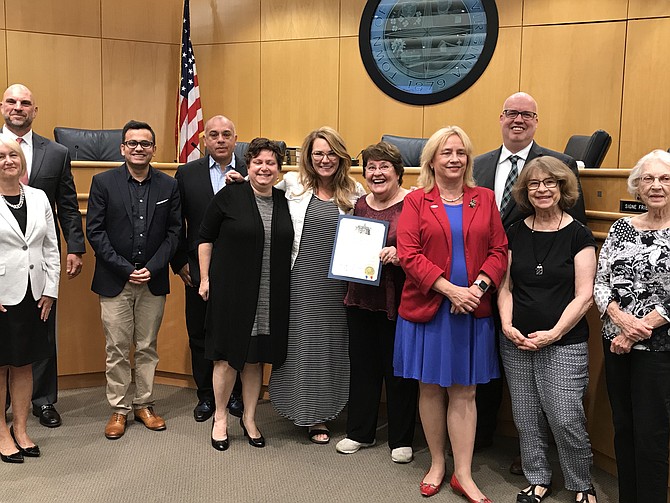 Mayor of the Town of Herndon, Lisa C. Merkel, and the members of the Town Council present a Proclamation to recognize the 130th Anniversary of the Herndon Fortnightly Club. Photo by Mercia Hobson.

"We are very proud of our eleven ladies who started our club one hundred and thirty years ago," said Mary Burger, President of the Herndon Fortnightly Club. "I'm eighty-one…I knew some of these ladies. ...They were old ladies…they were smart and strict ladies, and they have done so much. …We are small in number [now]…only like 30-35 max at a time, but we are powerful little old ladies.”

On Tuesday, Sept. 10, Mayor Lisa C. Merkel and the Town Council of the Town of Herndon presented a proclamation to recognize the 130th Anniversary of the Herndon Fortnightly Club, Sept. 21, 2019. The mayor and councilmembers expressed their gratitude to the Club's many volunteers who during the past 130 years dedicated countless hours, contributed to the community and improved the quality of life in the Herndon area.

THE WOMEN STARTED collecting books, and by 1900 had over 1,000, at which point the Club became the County's first lending library," said Olem. "By 1972, the Herndon Fortnightly Club moved into a building on Spring Street and operated the Herndon Fortnightly Library until the Fairfax County Public Library System assumed management and funding responsibilities."

During comments from Council, Councilmember Bill McKenna talked of the importance of putting events into context and the reason why.

"You have the 130th Anniversary of the Herndon Fortnightly Club and next August will be the 100th Anniversary of where women had the constitutional right to vote. So, for thirty years, you were teaching people how to read. And my father always used to tell me the most dangerous man, is a man with a library card,” McKenna said. "At nine years old I'm like, Dad, what the heck are you talking about? But as I got older, I started to understand what that meant. And the mission that you have and the things that you do are very important. My mother would constantly put that into me. I just wanted to let you know how much this means to me. ...The work that you do and the bravery that your organization stands for because 100 years ago, women were second class citizens. ...Keep doing the work you're doing, because it really matters," said McKenna.

Councilmember Friedrichs added that while the Club does big things, it is the little things that matter the most. Friedrichs recalled a project she did with the Club. “Putting together little goodies bags for the Herndon Police…everybody could get behind it, and no matter how much or how little money you had, you could participate ...Establishing a new library in a town is a pretty spectacular thing to do, and that will go down in history, but also it is the little things. And I want to thank you all for being the people that notice those things and do them."

HERNDON FORTNIGHTLY CLUB is the oldest Woman's Club in Virginia and continues to support literature, art, and science through support of libraries and scholarships. According to Burger, to date the Club has given more than $200,000 in scholarships and started another library, this one at Birmingham Green, a refurbished District Home Assisted Living and Health Care Center providing nursing and rehab services on Centreville Road in Manassas. “You mention it, we’ll do it,” said Burger.