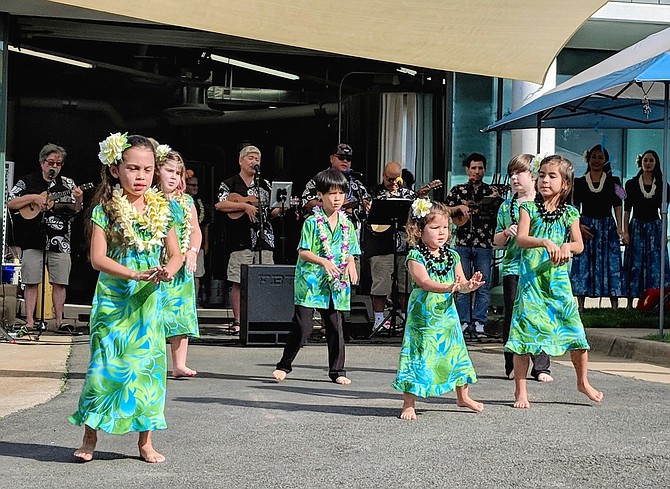 Area residents can visit Hawaii without leaving Chantilly when they attend Ono Brewing Co.’s. second-anniversary celebration, Saturday, Sept. 28. That’s because this family-friendly event will be a Hawaiian Luau party with Hawaiian food, music, dance and crafts at the forefront.

With family connections to Hawaii, Ono owners Scott and Cyndi Hoffman created a tropical-themed brewery at 4520 Daly Drive, so it’s only natural that their “Onoversary” will honor the islands. The fun starts at 1 p.m. and goes for seven hours and, of course, includes the brewery’s own craft beers.

“Ono” means “delicious” in Hawaiian, and both the food and beer are created to be exactly that. Odd BBQ will offer traditional, Hawaiian, plate lunches with traditional Kalua pork, plus other barbecue plates and sandwiches. In addition, some of the Hawaiian craft vendors will offer treats from the islands, such as Hawaiian shaved ice and a Samoan dessert called Pain popo – coconut sweet rolls.

THE LIVE ENTERTAINMENT will include 14 different Hawaiian music and hula-dancing groups throughout the day. More than 100 singers, musicians and dancers from the Washington Metropolitan area and beyond will be there to wow the crowd. And attendees can even learn to hula via interactive performances.

In addition, vendors and crafters will be displaying their handmade, Hawaiian-themed items, including leis, koa wood art, hair bows and dolls. There will also be lei-making demonstrations.

Event tickets are adults, $11; children, ages 6-17, $6; via www.onobrewco.com, or $15 and $8, respectively, at the gate. Children 5 and under are free. Food and drink must be purchased separately. Attendees will also receive a free, Hawaiian lei and a raffle ticket for prizes and giveaways throughout the day.

All the activities will be outdoors in the brewery’s parking lot, and the event will go on, rain or shine. Some seating/tables/tents will be available, but people are encouraged to bring their own blankets and chairs.

ONO BREWING CO. boasts the area’s first state-of-the-art, self-serve beer wall. Customers pour their own beer and pay by the ounce. The wall offers a rotating selection of 10 beers on tap, all brewed on the premises, including beers with names and flavors inspired by the tropics.

And since the Hoffmans believe in giving back to the community, each month, they select a different, local charity and then donate 50 percent of all their tips/gratuities that month to the charity. Since opening in September 2017, Ono has supported 24 local charities and donated more than $53,000. To learn more about it or to suggest a deserving, local organizations for future consideration, visit https://www.onobrewco.com/monthly-charity.