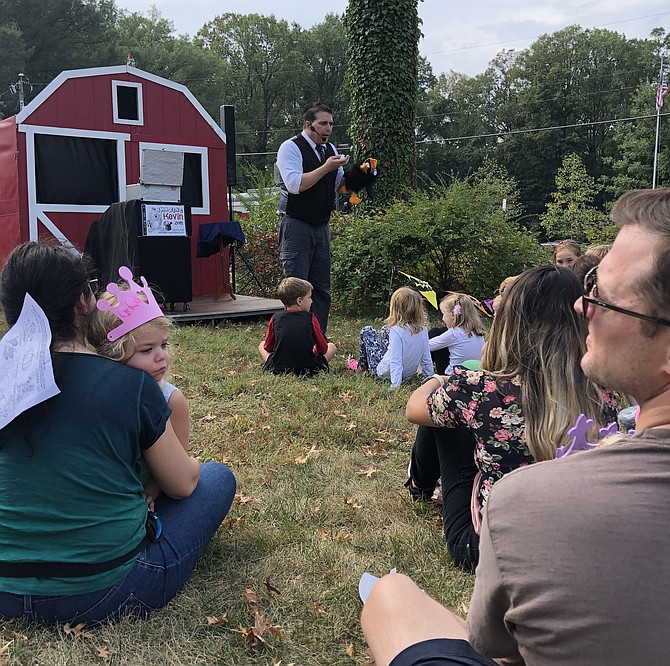 Families watch as the Amazing Kevin performs some magic with the help of his assistant bird named CC. Photo by Olivia Anello/The Connection

Watch your step! Cappy the pig spent the afternoon trotting around the MCC lawn. 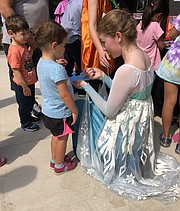 Claire Rogers, 2, is starstruck as Elsa from Frozen offers her a crown to decorate. 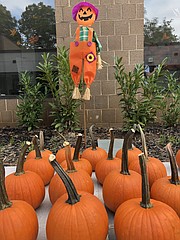 Pumpkins waiting to be picked and decorated by the children at Harvest Happenings. 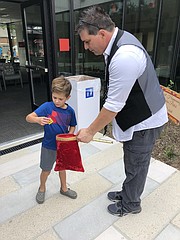 Henry Graham, 5, is astonished to pull a Rubik's cube from the Amazing Kevin's pouch, one that contained only three scarves before.

On Saturday afternoon, the McLean Community Center hosted their annual Harvest Happenings event for children and their families to celebrate the start of autumn.

Before even getting to the heart of the fall activities available at Harvest Happenings, children could be seen running to the next project, their faces painted with kitty ears or superhero masks, and carrying decorated pumpkins under their arms. A multitude of activities were offered inside and outside, from face-painting, pumpkin decorating, crown making, to other games like corn hole and agility courses.

A number of entertainers also shared their talents at the fall festival, such as the Amazing Kevin, Kidsinger Jim, and Squeals on Wheels petting zoo.

“Harvest Happenings is a fun and free event for children and families, and it acts as such a great way to bring everyone together, while also introducing the community to everything MCC offers,” Jennings said. Jennings and Kader shared too, that this year was special because not only has Harvest Happenings been returning for the community of McLean for more than 20 years, but it was also returning to the Community Center campus. Harvest Happenings had been hosted last year at the St. Luke’s church in McLean because of major renovations the community center had undergone.

Among all the activities to do at Harvest Happenings, meeting Cappy the pig was at the top of everyone’s list. Cappy is a miniature pig from Squeals on Wheels, the D.C. area’s traveling petting zoo. Squeals on Wheels has been traveling to birthday parties, schools, and nursing homes for over 15 years. There is even an event offered called “Hoppy Hour” where the animals travel to companies during business hours and brighten up the offices. Cappy and his animal friends live on one of the last farms remaining in Potomac, Md.

The fun doesn’t stop at the McLean Community Center, and Jennings assures new members that with all that is offered, “you’ll always be able to find your tribe here at MCC.” More events are coming up on the MCC October calendar; the McLean 5K is Oct. 5; and bring your beloved animals to the McLean Pet Fest on Oct. 20.