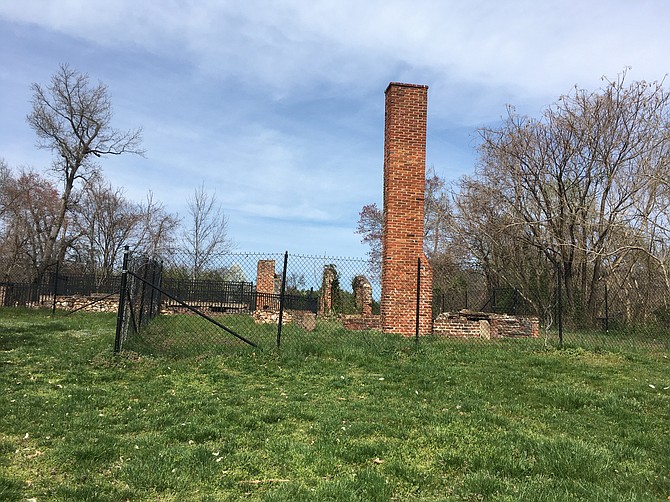 Yankees, rebels and the spy with the glass eye all went through Mount Air on Telegraph Road.

The American history thread that laces through the Mount Vernon District seems to focus on George Washington’s plantation and sites along the Potomac River. But the Telegraph Road corridor is rich in Civil War lore with a few sites that seem overlooked in the history books.

Telegraph Road stretches 9.3 miles from Pohick Church on the southern end to the Capital Beltway in Alexandria. The road was first built in 1847 as a path for the first telegraph between Washington, D.C. and New Orleans. It was known in those days as Stage Road and Post Road. Old maps have Telegraph Road following the same path, but the landmarks have changed. In the “David Rumsey Historical Map,” dated 1862, it’s hard to connect any sites noted on the map but Telegraph Road is marked, as is Pohick Church, Potters Hill and at the bottom of Potters Hill is Piney Run, which eventually runs into Dogue Creek. Today there is a road called Piney Run in that location.

There are property names on the map, such as Devers, Col. McCarty, Cash, and Triplett, which don’t ring the historic bell, but Col. McCarty once 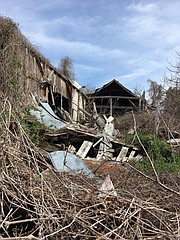 The ruins at historic Mount Air on Telegraph Road.

Accotink Drive is an old road that borders the Mount Air historic site which is marked with a historical marker. The remains of several structures can be seen, each surrounded by fencing and covered with vegetation. It was called Mount Air because of the breezy location.

“Pleasant country vistas may be seen on every side at Mount Air. The white frame house faces north. Constant breezes suggest the origin of the plantation’s name,” wrote local historian Edith Sprouse in a description for Fairfax County in 1970.

Story has it, there was a fire when Colonel McCarty owned it in 1820, and another fire in 1859 when the land was owned by the McCarty and Chichester families. In 1860, Aristides Landstreet of Baltimore purchased the property, and when the Civil War broke out, the Landstreets fought on the Confederate side. Confederate and Union troops stopped at Mount Air for supplies, and, in the case of the Union troops, used the property and house as a camp.

According to an entry on the Fairfax County Park Authority blog "Our Stories and Perspectives," Landstreet’s Confederate sympathies were noticed, and he was arrested twice and jailed. The Union Army also arrested his wife, Mary, on suspicion of provisioning rebel troops. During the war, Union troops, including the 5th Michigan Volunteer Infantry Regiment, camped at Mount Air and forbade the family to open their curtains for fear that they were signaling nearby Confederates.

Local historian Don Hakenson has written several books on local lore, and when it comes to the Civil War, he is known to focus on John Mosby, a Confederate Cavalry soldier that frequented Fairfax County. Hakenson’s great, great uncles rode with Mosby, and his two great, great grandfathers, Elijah Columbus and Robert F. McCormick, were in the Virginia Cavalry. “We have a lot of history here,” said Hakenson, who is also a curator of the Franconia Museum.

The barn at Mount Air.

One account in the book from Annie Landstreet, had a Confederate spy named John Burke tip-toeing around Union soldiers while they were sleeping on the porch of the Mount Air house. Burke was known as “the spy with the glass eye,” said Hakenson, and he wrote an account of this spy on the historical plaque at the Hilltop Village Shopping Center, at the intersection of Beulah Street and Telegraph Road, which is Potter’s Hill.

When World War I came, and the U.S. Army was ramping up operations at Camp Humphrey, which is present day Fort Belvoir, the railroad that was built to Camp Humphreys went along the southern edge of the Mount Air property. The railroad construction workers camped at Mount Air while they were building the railroad. A few remnants of this railroad remain, including an old railroad bridge over Cinder Bed Road in Newington.

North of Mount Air is a “wide fertile valley with but little timber” it says on the map, which is currently occupied by a Coast Guard station and Hayfield Farm. One road labeled Accotink Turnpike is possibly the first version of present-day Richmond Highway.

Next week, the Hayfield Farm and the 16-sided barn.