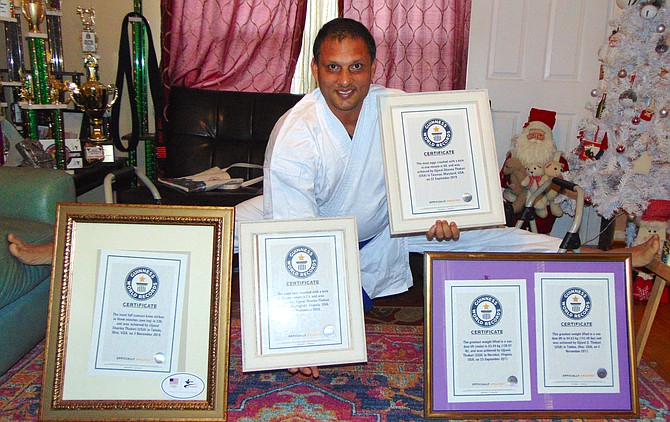 Ujjwal Sharma Thakuri, 45, of the Leewood community of Springfield has earned his fifth title in the Guiness Book of World Records. A World Martial Arts Champion, the Nepali native broke the record for crushing the most eggs with a kick (68) in one minute. The eggs were lined up on a 4-foot-3-inch-high beam where he kicked and broke the eggs in front of judges in Towson, Md., recently.

“I feel great and give thanks to God that he gave me the power to bring my name to the Guiness Book of World Records. I feel blessed by God that I did such a good thing for the country,” said the Uber cab driver by day.

The sixth-degree black belt (“Roku”) in American Marine GoJu-Ryu Karate has been written about hundreds of times in Nepali and American newspapers for his accomplishments. Today, he lives on Leebrad Street in Springfield with his wife Priyanka and daughter Elizabeth, 13. He came to the U.S. 18 years ago after spending his childhood in Kathmandu, Nepal.

To prepare for the event, he tied weights to his legs and practiced kicking real eggs in his yard for three years. “You have to measure the height; you have to put the timer on the side and practice every day,” he said. “The egg has to be crushed permanently. I bought nearly expiring eggs and then I crushed maybe 1,000 eggs when I was practicing.”

In Karate, the name of the powerful front kick is the “Mae Geri.” He said he hopes to achieve his sixth Guiness World Record soon, the latest being two hat-ricks, where he wears 10 pounds of weights on his ankle and does knee strikes. The goal is to do more than 100 knee strikes at four feet height for three minutes; that’s the world record. He has already completed 70 strikes in one minute.

He performed his Guiness Record feat in front of four judges, two time-keepers, as well as a crowd of 500 spectators. He started training for the feat in 2015, by working out for an hour and 30 minutes every day. He trained in Springfield with Lt. Col. Garry Klaus, USMC Ret., of the Soki American Marine GoJu.

Thakuri is an expert in American Marine GoJu-Ryu Karate and also does Shito-Ryu Karate, which means karate with empty hands or no weapons. Strictly an amateur fighter, he receives no financial rewards for his hard work but holds more than 30 national trophies, medals, belts and cups for competitions inside the U.S.

His biggest accomplishments include the world record for the most full-contact knee strikes in three minutes (226 on one leg); he holds two world records for his Van Dam-style weight lift – a split and weight lift (142.48 pounds); the feat is named after Rob Van Dam, whose record he broke two times. His other records include a World Championship Belt – the 2017 Kuro Bushi Martial Arts Organization Champion; a World Title Belt from the Battle of Baltimore 2016 World Karate Championship. Another is a first-place Black Belt in Creative Form at the Amerikick International Championship.

In his living room, along with his other awards, he has letters signed by Virginia Sens. Tim Kaine and Mark Warner, U.S. Rep. Gerry Connolly, as well as Ohio Sen. Sherrod Brown for being a five-time Guiness Record holder, among others. In the future, he hopes to open a Dojo, a training facility for Karate, and train people for the Olympics.