Going on a Bear Hunt During COVID-19 in Herndon
Votes

Going on a Bear Hunt During COVID-19 in Herndon

But, there's barely any bears! 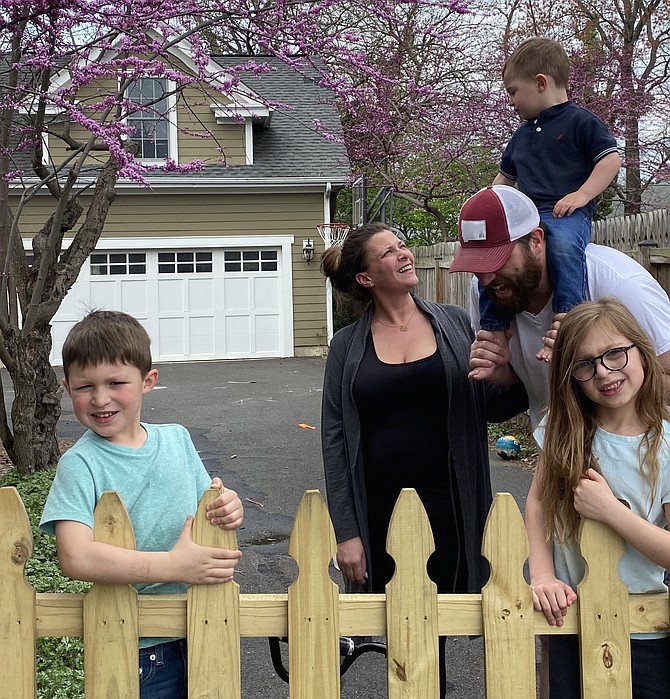 The Spear family of the Town of Herndon, Jay, 5, mom Christin, dad Mike, Zach, 2, and Lily, 5, stay behind the new driveway fence Mike installed. On the other side, a 6-foot social distancing chalk line keeps others a safe COVID-distance away from the family. Photo by Mercia Hobson. 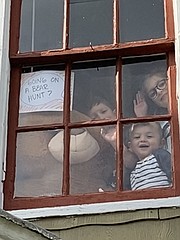 Bear hunt anyone? The Spear children Jay, 5, Zachary, 2, and Lily, 7, wave from a second-floor window facing the sidewalk of their family home in the Town of Herndon. Beside the children, their biggest bear is tucked in the window in hopes other families see it and put bears somewhere on the sidewalk side of their homes or properties too.

Locked behind the new fence, no friends and no extended family visiting, the three young Spear children of the Town of Herndon, Lily, 7, Jay, 5, and even Zach, 2, know the word COVID-19. Zach fills in the word "nineteen" when mom, Christin, says grandpa and grandma can't visit because of COVID. "I guess I'm saying it too much," she says. Lily and Jay remember not to cross the chalk line 6 feet from the end of the driveway. "COVID-19," they say.

The children understand there is only one way out-when dad, mom or the new nanny opens the gate, and it's time for another walk. "We go on a bear hunt; that's what we do," says Lily. According to Lily, they sing the song, 'Going on a Bear Hunt.’ Asked if they had seen any bears, Lily shakes her head and says, "No… And I want to see infinity bears." "Sixty hundred," says Jay.

"We're Going On A Bear Hunt" is the animated story cartoon version of the classic Bear Hunt children's storybook by Michael Rosen, illustrated by Helen Oxenbury. Created by King Rollo Films, according to Cartoons for Kids, the song caught the hearts of children and parents across the globe before COVID-19. People in Australia, England and Richmond, Va., put teddy bears in their windows, on lamp posts and up in trees to make walks around the neighborhood fun for little tykes during the pandemic. "We're going on a bear hunt; we're going to catch a big one — what a beautiful day, we're not scared," sing the children modeling the words the characters sing.

The Spear children sing the words walk, after walk, after fruitless walk, but no bears. Christin says she and the children are looking really hard. "We were just hoping someone would see our bear and put one in their window. We're at the tail end of things to do here… I saw this (The Going on the Bear Hunt) viral post down in Richmond, and then someone posted something here on the Herndon Facebook page. I was like: we will be totally into that. So we put out our bear, but nothing... We're still hoping," she says. "That's why it's a bear hunt," says Christin's husband, Mike.