Using the time to do new things and bond. 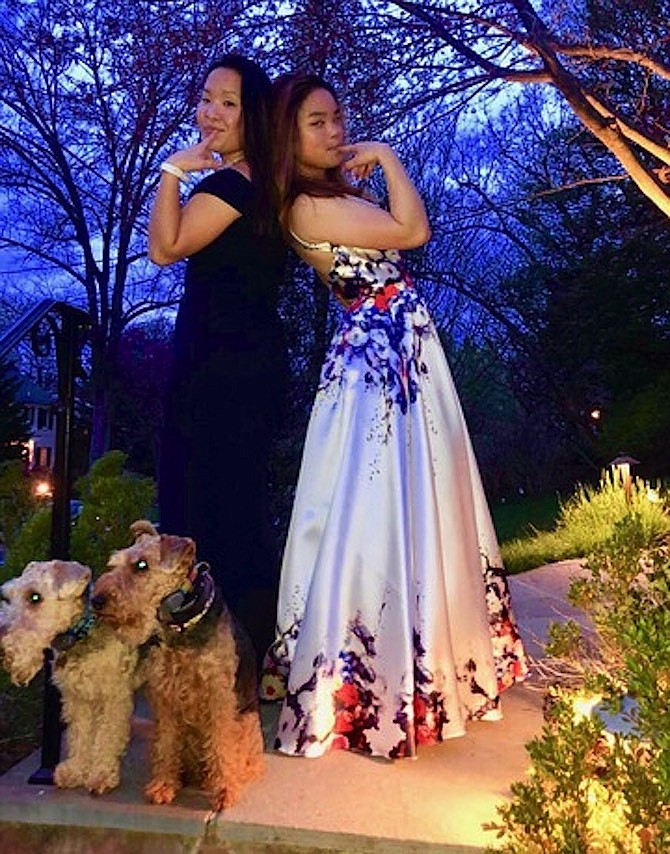 The two Fisher girls, Roberta and Sofie, posed on the lawn for photos with their dogs, Maisie and Winston. Photo contributed 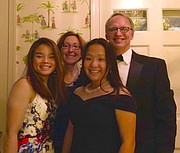 The Fisher family held a black tie dinner – for the four of them – at home one night. Getting takeout from Aracosia in McLean, they served a three course dinner on good china, and talked, a lot.

In the middle of the shut-down, with Governor Northam’s stay-at-home order ringing in their ears, Fernanda and Brian Fisher held a fancy black tie dinner in their North Arlington home, getting out the good china, the long gowns, the sparkly necklaces, making the neighbors stare, and inviting… their two daughters, who were home from college and boarding school. Roberta Fisher lent her old prom gown from high school to her little sister. The four of them, dressed to the nines, took photos of themselves in dramatic poses on the lawn, and sat down to a delicious three-course dinner ordered out from Aracosia McLean.

“Our best conversations are in the dining room, so we had a free ranging one about the virus and its effects on the world plus prayers for those we know who are ill, recovering or immunocompromised. Being together as a family now has allowed all of us to practice patience, be creative and learn to adjust our expectations,” said Fernanda Fisher. Later in the month they had a “Denison University Night” where everyone had to dress up in Denison gear. Next, a Berkshire Academy night.

ONE SEES Arlington families on the streets, people one didn’t even know lived in the neighborhood. The sounds of children playing, biking, or practicing baseball, sounds relegated to the 1950s and 60s, are back. Parents are cooking up a storm in the kitchen they had long ago traded in for take-out. Flour is flying off the shelves as homemade bread bakes in the home oven. People are cleaning their own homes, sending checks to their cleaning staff so they won’t lose income. Cars are in the garage. Families are eating dinner together, trees are being climbed, dogs are being walked, and walked, and walked.

But Arlington is a city of over-achievers. Playing could never be enough for them. What are they doing? Gardens are being planted. Virtual fundraising 5Ks are afoot. Couples are coming up with “Covid-19 to-do lists.” One couple realized their to-do list was not progressing, and decided to make a new list: “Things we will be sorry we did not get done while we were home during the pandemic.”

ANNETTE LANG was looking forward to having some time to travel when she retired: the last thing she expected was to be self-isolating at home in Arlington. She thought about what she could accomplish during her enforced isolation: she could organize photos or clean out closets, for instance, but she knew herself better than that. “If it has an end goal, I’ll never get there.” She even thought, “Enlightenment might actually be more achievable.”

Lang decided that while Enlightenment itself might be out of reach, she could record hours working on being mindful and that would help her not feel guilty about being “unproductive.” So she chose two hours of meditation and meditation reading and three hours of mindfully engaging in exercise, including walking and stretching every day. Housework counts, but, for her, an hour of housework equates to a half hour of exercise, even though she admits it’s more like the other way around.

Lang has been practicing meditation on and off for more than 5 years. She is part of the Insight Meditation Community of Washington (IMCW) and has taken classes as well as gone on meditation retreats to Cuba and Greece. Lang says she started meditating when she had some health problems and someone recommended meditation as one useful tool to try. It struck a chord with her immediately, but until COVID-19 hit, she did not have or take the time to incorporate it more fully in her life.

“I don’t really expect to achieve anything close to Enlightenment, but I would like greater peace of mind and kinder, more appropriate responses to triggers in life.”