‘At What Price and At What Cost’ in Great Falls
Votes

‘At What Price and At What Cost’ in Great Falls 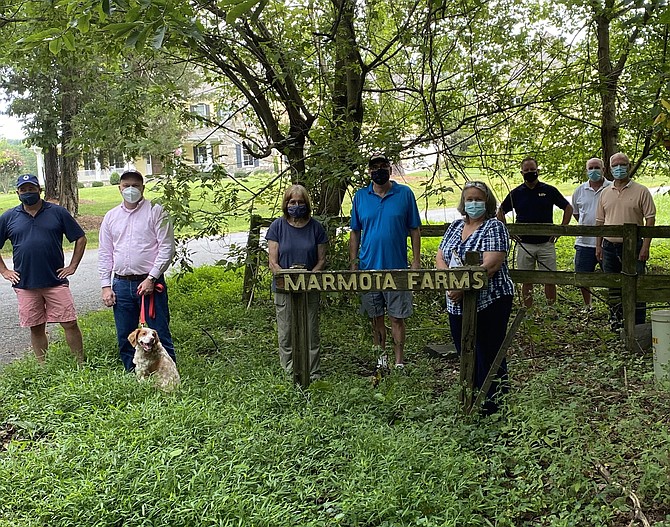 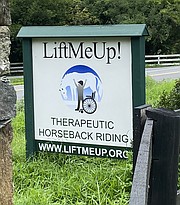 “Lift Me Up!” is a nonprofit organization whose property abuts the eastern boundary lines of the property currently under contract between Toll Brothers and owners of the 22.781 Marmota Farm property.

(Click on "Download .JPG" to see large plan.) The El Farouki Addition, showing entrance from Georgetown Pike on the scenic byway and the rear views of dwellings facing toward the Pike and neighbors.

Development plans are in the works for Marmota Farm in Great Falls. Once again, as it has for nearly 15 years, one word, "by-right" holds in its grip deterministic zoning regulations governing the 22.781-acre parcel of undeveloped, rural land located in the Fairfax County Dranesville District at 9800 Georgetown Pike. Supervisor John Foust (D-Dranesville) represents constituents in the District. The closest abutting intersection to the property is west of the corner of Innsbruck Avenue. Great Falls Grange Park and Schoolhouse owned and operated by Fairfax County Park Authority are there.

At a recent Great Falls Citizens Association meeting, the Land Use & Zoning Committee reported that in May of 2020, home construction company, Toll Brothers, entered under contract with the current owner. According to current Fairfax County records, the owner is Stephen H. Moriarty Trustee, Souhail El-Farouki Trustee. The property holds "by-right" zoning. No public hearing is required for by-right use. Instead, projects can proceed with Fairfax County administrative approval. Citizens Sean Beyer, Robb Watters, Paul Bennett and others are concerned as are members of the Great Falls Citizens Association that convened a meeting to investigate concerns.

Beyer lives with his mother in the historic William Gunnel House (c.1750) on Innsbruck Avenue. He said, "We strive to protect the history of this area which is at the center of the Great Falls Village. Building 11 homes on the Marmota Farm site, one side of which runs along Innsbruck Avenue will diminish the viewshed of the historic Grange (1930) and the old schoolhouse (1889) and will alter the historic Georgetown Pike (built in 1813). Grading the hill to make way for an entrance to Marmota will disturb the original roadbed."

Adjacent property owner Paul Bennett, President of the Marmota Farm homeowners association said, "I guess my overall concern is that the property itself, this is a strong word, could potentially become denuded with the development...We want to be sure everybody is looking at this with a discerning eye."

"Fairfax County is short on funds due to COVID...but who is leveraging whom?...We get that they (Fairfax County) will make the fees and they are looking at the dollar value of what it is going to be worth for the County, but at the will of its constituents and not taking into consideration the ecological damage. One must ask at what price and what cost," said Robb Watters.

MARMOTA FARM is within a former larger parcel dating back three centuries of unfettered, undeveloped use. It was once a dairy farm. One thousand feet of the property frontage faces historic Georgetown Pike, Virginia's First Historic and Scenic Byway. It is listed on the National Register of Historic Places. Watters added that traffic from the development facing the Byway proved to be one of his primary concerns, describing it as "unparalleled." However, environmental concerns, the ecological balance of the land, factored into the consideration equation. "The runoff and the silt from the construction are going to pollute the very delicate and ecological balance in the lakes we have here...They are all interconnected. So, this runoff that the County enforces and said there will be no exception, is exempted (because of by-right use)…For Foust to truly not take into consideration this neighborhood, especially on this project, is astounding to me given this day and age...I don't consider him listening to the will of this community."

The Great Falls Citizens Association provides a way for residents in the non-incorporated community, with no Town Council or local legislative body, to participate in matters including those at the County level that affect neighborhoods and families. Thus, with the Marmota Farm subdivision poised for the third time for possible development, this time by Toll Brothers after two other plans by different parties failed, and renewed concern riling among seasoned community members and those within Great Falls Citizens Association familiar with the by-right status, on July 22, William Canis, President of the Association sent a letter to Supervisor Foust.

On behalf of the Association, Canis asked Foust for support in a three-prong effort of due diligence, focused in part to get zoning reviewed given the by-right status of the property with pre-subdivision approval of 11 builder lots. He wrote: "The Great Falls Citizens Association (GFCA) requests your assistance in working with County staff to ensure that the Marmota Farm subdivision, previously approved, will be reviewed against all revised standards governing site improvements involving the principal road access from Georgetown into the subdivision, controlling stormwater management (SWM), and perimeter buffers and landscaping."

In the letter, Canis expressed concern that plans were in the works to cut the elevation of Georgetown Pike at the subdivision's entrance to accommodate sight-line requirements. “The Georgetown Pike is on the National Register of Historic Places,...A historic asset worthy of preservation," he said. The original turnpike’s finished roadbed was constructed by hand between 1813-1827. The process involved complex engineering specifications. Paved over circa 1919, "…no alterations have been made to the original foundation," said Canis. The Association asked for an alternative to cutting the byway to allow for the sight distance.

As for stormwater management, Canis said, "GFCA members and adjacent residents have expressed concern over the approved plans to route storm water drainage to properties lying to the area south of Georgetown Pike." He called attention to recent historic rains and evidence of system failures even when state-of-the-art stormwater management had been put in place.

The third and final prong of effort, perimeter buffer and landscaping, concerned all boundaries. "Lift Me Up!' is an abutting property to the east. The nonprofit operates equestrian-based therapeutic programs, "a critical and important part of the Great Falls community." According to Canis, "Lift Me Up! " recognized the proximity of houses to them might require additional buffers to their well-managed facility. The subdivision’s planned dwellings abutting the historic byway, County Schoolhouse and Grange properties, presented rear views. They visually impacted and diminished valued viewsheds critical to retaining the character of the community. Canis urged the County to consider conservation easements, modifications or insertion of language into the HOA documents to protect viewsheds in perpetuity.

JENNIFER FALCONE, Chair, GFCA Land Use and Zoning Committee, said, "I am working to schedule a meeting with county officials to ensure the key points of our concerns over the approved plan for development of Marmota Farm will be addressed with the highest level of oversight, so the community will realize the least amount of damage and disruption should this plan or any other development move forward."

A spokesperson for the Office of Supervisor John Foust, Dranesville District, said, "At this time, we have no more details as to what is happening with the property; it would not be appropriate for Supervisor Foust to provide a quote at this time." Request for comment to Toll Brothers had not been received by press time and is pending.

According to Aug. 16, 2020, Fairfax County records, the parcel is zoned residential-one dwelling unit/two acres. Fairfax County gave approval to the site plan in 2006. There is no historic site on the property, and it is not in a County Historic Overlay District. In May of 2020, Land Development Services showed 11 single-family, detached homes in the by-right subdivision. The entrance was from Georgetown Pike.