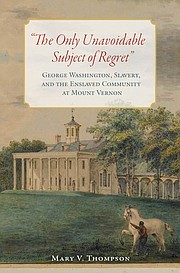 The Society for Historians of the Early American Republic is proud to announce the following winners of the 2020 book, article, and dissertation prizes.

The James Bradford Best Biography Prize, awarded annually to the author of an original biography, broadly defined, of a person active during the era of the early republic, goes to Mary V. Thompson, for “The Only Unavoidable Subject of Regret”: George Washington, Slavery, and the Enslaved Community at Mount Vernon (University of Virginia Press, 2019). The prize committee, composed of Professors Manisha Sinha, Jeffrey L. Pasley, and Christopher Grasso, offer the following praise of this work:

When Mary V. Thompson began working at the Mount Vernon historic site forty years ago, no one spoke of “slaves” — George Washington’s enslaved workers were called “servants.” The decades of pioneering work in the history of slavery that she had learned about in college and graduate school went unacknowledged. As she progressed from tour guide to curator to staff historian, Thompson and other scholars brought the burgeoning historiography of slavery and African American life to Mount Vernon in an effort to tell a truer story of the past to the millions who visited. Their painstaking archival and archeological research transformed the public presentation of Mount Vernon, which (as Thompson points out) provides many of its visitors with their only first-hand experience of a southern plantation.

With this volume, Thompson records and demonstrates their signal contributions to the broader scholarship on slavery and freedom in eighteenth-century Virginia. The product of decades of work, The Only Unavoidable Subject of Regret is more than a remarkable synthesis. While not a traditional biography of Washington, the book is an essential contribution to the study of his life, revealing his character through his practice of slavery, the cultural and socio-economic foundation of his identity as an elite eighteenth-century Virginian. The book will be a starting point for all future conventional Washington biographies. The focus of Washington’s attention and passion throughout his life, the management of Mount Vernon and the other plantations tell us as much about him as his military and political careers, and reflect a harsher light back on those, too. Thompson does not let her admiration for Washington in other contexts make her flinch from portraying the everyday and perpetual cruelties of Washington’s slaveholding, which included whipping, shackles, tracing escapees with dogs, and selling people away from their families.

Understanding Washington as a slaveholder requires a comprehensive reconstruction of life at Mount Vernon, and this book provides it as only an author who has spent their career directly immersed in a subject can do. Thompson analyzes the work regimes of the various hired, indentured, and enslaved workers that kept the plantation functioning.

Several chapters reconstruct life in the slave quarters, from the details of their material surroundings and diet to their social relationships and cultural practices. Other sections consider the process through which Washington’s concern for his and the country’s reputation eventually led him to reconsider slavery, despite his avid and successful efforts to profit from it to his last breath.

Along the way, the evidence is weighed and judicious answers are provided for every major question and controversy regarding the Washington family and slavery. Taken as a whole, the book provides a valuable view from Mount Vernon the historical institution that shows just how well academic studies, public history, and material culture can mesh and enrich each other.

In short, Mary V. Thompson’s book amounts to new required reading on the first subject in American biography. Slavery at Mount Vernon was fundamental to George Washington’s character and life, and those in turn have the broadest implications for how we approach the Founders in general. General readers and scholars alike are Thompson’s debt, and her book richly deserves the 2020 SHEAR Bradford Prize.

For a question-and-answer session with the author, see: