For (Some) Women, Right to Vote Came 100 Years Ago
Votes

For (Some) Women, Right to Vote Came 100 Years Ago 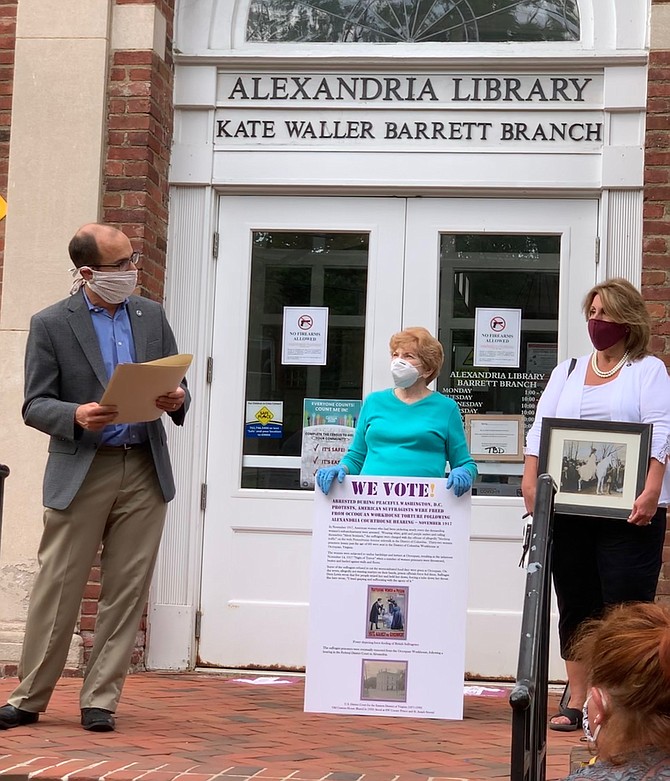 Suffragists Helena Hill Weed and Vida Mullholand in the Occoquan prison in 1917. Weed's crime was carrying a banner that read "Governments derive their just powers from the consent of the governed." 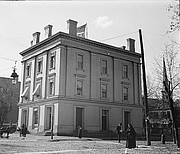 On Nov. 27, 1917, the Alexandria Customs House and U.S. Federal Courthouse at the corner of St. Asaph and Prince streets was the site of a hearing that freed women suffragists being held and tortured at the Occoquan prison.

National Women’s Party activist Dora Lewis (wrapped in blanket) after her release from the Occoquan Workhouse in 1917.

Harry Burn was a staunch anti-suffragist. But then the 24-year-old legislator unexpectedly uttered “aye” to break a deadlocked vote at the Tennessee statehouse, leaving his colleagues in stunned silence. The date was Aug. 18, 1920, and with that single syllable a half century of tireless and sometimes violent campaigning had ended. The 19th Amendment to the U.S. Constitution had passed: Women were granted the right to vote.

Alexandria marked the centennial anniversary of the historic date with an outdoor gathering at the Kate Waller Barrett Library, where Mayor Justin Wilson issued a proclamation in recognition of the ratification. The location also recognized the efforts of Kate Waller Barrett, an Alexandrian and leading social and voting rights activist of her time.

“Alexandria Celebrates Women was founded to recognize the historic achievements of women in Alexandria while celebrating and empowering the modern Alexandria woman,” said Gayle Converse, co-founder of the organization that sponsored the event. “Going forward we will be looking at becoming a resource for women’s history while doing what we can to empower women.”

Converse and co-founder Pat Miller have coordinated a series of events to mark the ratification of the 19th Amendment, including a special exhibit at the Torpedo Factory Arts Center featuring women’s suffrage-inspired art, voting rights history, and voter registration information. The exhibit runs Aug. 19 through Sept. 27.

The group is also spearheading an effort to establish a historical plaque at the site of the old Customs House and Federal Courthouse at the corner of St. Asaph and Prince streets in Old Town. In 1917, the courthouse was the site of a hearing that freed women suffragists being held and tortured at the Occoquan Workhouse prison in Lorton.

“On Nov. 17, Judge Edmund Waddill Jr., in the United States District Court at Richmond, Va., ordered a writ of habeas corpus seeking the release of the suffragists undergoing the rigid disciplinary treatment at Occoquan,” said Converse in detailing the series of events. “Judge Waddill set the hearing for Nov. 27 in Alexandria, nine days after the prison’s ‘Night of Terror’ against the women.”

The suffragists were transported from Occoquan for the hearing, where their appearance shocked spectators. They were malnourished and had been tortured. Many were over the age of 60.

“Many were so weak they had to lie on the courtroom benches,” said Converse.

News of the Night of Terror sparked protests across the country and the hearing in Alexandria made national news. The Lucy Burns Museum at the site of the former prison in Lorton details the historic events.

The ordeal began on Nov. 14, 1917, when 32 suffragists were arrested in Washington, D.C. for blocking traffic on a Pennsylvania Avenue sidewalk. They were sent to the workhouse in Lorton, where the women were subjected to undue hardships and torture, resulting in the infamous Night of Terror.

A number of women prisoners were threatened, beaten and hurled against walls and floors. A few days later, force feedings began. The suffragist prisoners were eventually freed from the Occoquan workhouse following their hearing in Alexandria’s federal courthouse.

“We are working with The Office of Historic Alexandria to install a historic marker to commemorate the location of this important suffrage movement court case,” said Miller. “We need to raise $4,750 in order to fund this monument in recognition of the women who bravely endured imprisonment and brutality in their efforts to gain the vote for all women.”

Added Converse: “To this day no one knows why the women were sent to Occoquan. And while women in Alexandria gained the right to vote in August of 1920 after the 19th Amendment became law, it would be another 32 years before the Virginia General Assembly ratified the amendment on Feb. 21, 1952. And it took the Voting rights act of 1965 for African American women to receive unhindered access to the ballot box.”

But why exactly did the young Tennessee legislator change his vote at the last minute 100 years ago? Because that morning he received a note from his mother asking him to vote “aye.”

Alexandria Celebrates Women is a 501(c)(3) nonprofit. For more information or to donate to the memorial, visit https://alexandriacelebrateswomen.com/.