Large group of investors pull out

Artist rendering of the proposed building design for The Floris Conservatory of Fine Arts & Music. 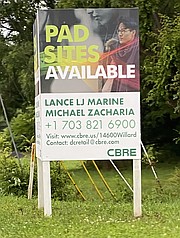 Five years after courting and securing investor funding and going through the processes for County approvals, construction on The Floris Conservatory of Fine Arts & Music appears in jeopardy as major investors pull out and a sign is on the property.

The proposed Floris Conservatory for Fine Arts & Music, a $40M, 48,000 square foot Scimores Academy LLC project for children 4-18 years of age planned for 8.06 acres at the intersection of West Ox and Centreville Roads in Herndon, might not come to fruition. "We are very thankful for the support and appreciation we had received from the county and community. It would be a wonderful addition," said Hemanth Kumar Balasundaram, Founder and Managing Principal of McLean-based Scimores Corporation. The project is located in the Hunter Mill District of Fairfax County.

According to Balasundaram, investors funded "close to $12.5M to bring the project to the construction phase." The company's website reported the project initiated in March 2015, followed by a completed Feasibility Study and Generalized Development-Special Exception Plat.

TWO YEARS LATER, in March 2017, the County Planning Commission approved the Rezoning & Special Exception Application. In June 2017, the Board of Supervisors approved it, and the next month, Scimores submitted the Site Plan to DPZ. In October 2017, Scimores Academy LLC purchased the four parcels of land, two fronting Centreville Road and the other two fronting West Ox. Three historic structures remain on the property.

At a Dulles Regional Chamber of Commerce event in March 2019, Balasundaram announced the construction of the corporation's new project would begin that June, "an aggressive build" with completion by September 2020. Balasundaram said the project would have parking for 250 cars, twenty-five studio spaces for group classes, ten private pods for lessons, a 300-seat auditorium and a 120-seat conference center. The light-filled building would be centered on a courtyard and offer country views. "We will have a music shop, cafe, and a professional recording studio," he said. Shovels did not hit the ground.

On Jan. 14, 2020, Andrew Painter Esq., acting on behalf of Scimores Academy, LLC, requested the Fairfax County Board of Supervisors to approve "Additional Time to Establish Use or Commence Construction for Special Exception SE 2016-HM-007, Scimores Academy, LLC (Hunter Mill District)." Among other things, Painter informed the Board that Scimores Academy, LLC, diligently continued to seek funding. They also terminated outstanding leases on the property, and stabilized and secured its three historic residences.

THE BOARD of Supervisors approved the request for 24 months additional time.

Slightly over six months later, a wooden tri-board is erected on Scimores’ building site. It reads: "Pad Sites Available." Balasundaram said they listed the property in case their group was unable to find the needed funds, someone else could develop the property or joint venture with them, something they actively continued to seek. He said, "Our effort to raise funds for the construction got delayed for a few reasons, and furthermore due to COVID-19. While a group of us are still working to raise the needed funds of about $5M to take this project forward, the larger group given the current uncertainties have decided to pass the baton and exit… Everything stands as approved to date."

Upon learning of the project's status, John Boylan, President and CEO of the Dulles Regional Chamber of Commerce, said, "We held a recent event on the arts. It reinforced the importance of the arts to the community as well as to businesses."