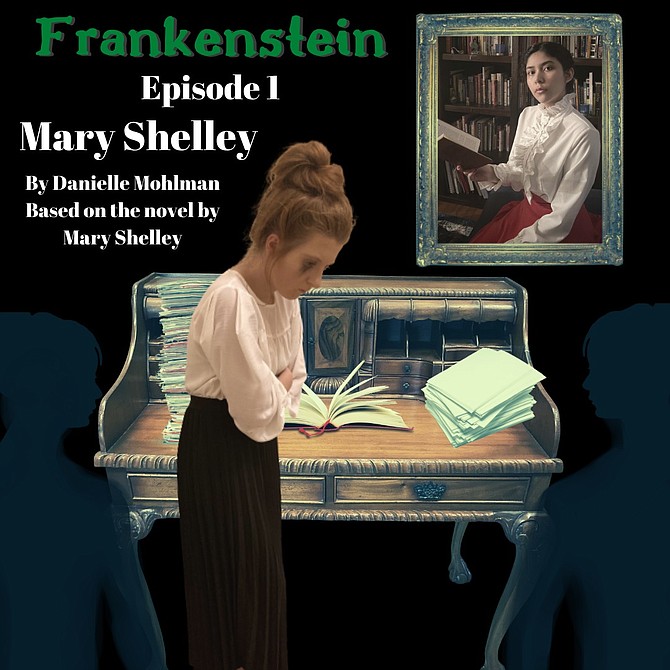 Mount Vernon High School has produced Frankenstein as a series of audio recordings.

Wind blew and whistled over a soft piano until cracks of thunder and a baby's cries punctured the surroundings. The audience felt as though they were surrounded by the walls of an old, dark mansion in a different time, but they opened their eyes and saw their modern home and laptop. Mount Vernon High School presented Danielle Mohlman's "Frankenstein, Episode 1," a radio play adaptation of Mary Shelley's Frankenstein. They not only retold the classic tale of Victor Frankenstein and his creature but drew parallels with Mary Shelley's tragic life.

Mount Vernon faced the challenge of an online performance and overcame it by making the strong choice of using audio only. The actors and techs had the audience feeling like they were following the characters as they ran from one place to the next and created emotion and depth without the physicality that can feel necessary to put on a performance.

Bridget Snyder's emotional vocal delivery brought Mary Shelley's pain from her infant daughter's death to life and put an image in the audience's mind of her hunched over, paralyzed from her despair. Snyder conveyed a character different than herself and showed the audience Shelley's backstory through only her emotion, along with Katia Ramirez as Mary Wollstonecraft. The audience could tell they were mother and daughter from the chemistry and blend of their voices and could sense the passion for feminism and strength in Ramirez's words. Snyder was also able to change her voice to create a completely different character as The Creature, along with Quinn Montgomery who played both Percy Shelley and Victor Frankenstein. The characters were clear and easy to differentiate, which allowed the audience to see how Percy, as the man, created the public's perception of Mary just as Victor created The Creature.

The environment was most clearly shown through the outstanding soundscape created by Sebastian Fisher, Caden Mulvey and Katia Ramirez. At the beginning of the production, a minute and a half of only sound effects was crafted to place the audience into the world of Mary Shelley and Frankenstein. A chilling lullaby produced a creepy tone while background, forgotten sounds like footsteps and the clinks of a glass jar allowed the imagination to form a clear scene. Even the blending of voices and inclusion of breathing heightened the emotion and made the audience feel as though they were sitting with the characters. The beautifully themed and cohesive posters that included actors in perfect period clothes and tragic makeup prepared audience members for the environment they would be placed in and gave them a visual to facilitate their imaginations.

Theatre is currently limited by COVID-19, but Mount Vernon was able to exceed the expectations of the audience by creating such a strong environment with every single aspect of the show. And there is more than just "Frankenstein, Episode 1." They left the story on a cliffhanger and will keep audiences entertained for a total of 7 episodes. Instead of binging a TV show or podcast, allow Mount Vernon to bring you back to the theatre and immerse you in the world of Mary Shelley with just a computer and a pair of headphones.

More information can be found at: https://www.mvhstheatrearts.com/frankenstein