Vaccinations Made Easy at Drive-In Clinics for Pets
Votes

Vaccinations Made Easy at Drive-In Clinics for Pets 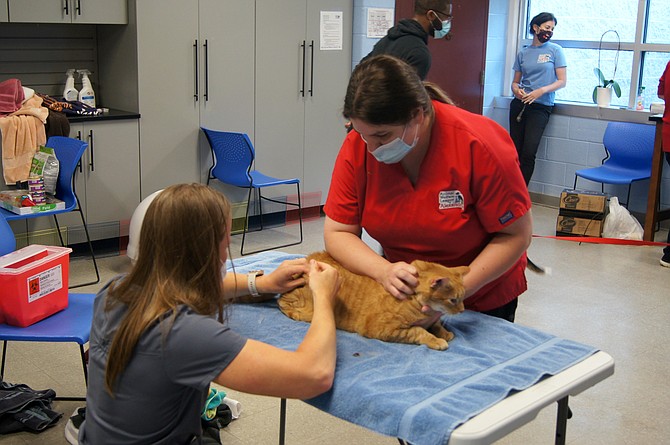 At a time when vaccines are top of people’s minds, the Animal Welfare League of Alexandria is offering a new way for the community to make sure their pets don’t miss their own critical medical treatments.

Starting in September, the AWLA has been conducting monthly drive-in clinics, providing rabies and distemper vaccines to animals who need them. “We have seen high demand for affordable vaccinations, particularly as the effects of the pandemic continue to strain pet owners’ financial resources in our area,” said AWLA Director of Community Programs Joanna Fortin. “But pet owners are still committed to providing the care that their pets need, and we’re proud to be able to support them in doing so.”

The two-hour clinics are held monthly on Wednesday evenings and have so far have seen 76 pets, administering 138 vaccinations.

To register, pet owners reserve a five-minute appointment online in advance at https://alexandriaanimals.org/vaccine-clinics/. When they arrive at the Animal Welfare League of Alexandria, they are greeted by volunteers who check them in and receive payment. Pet owners remain in the car as, household by household, animals are brought into the shelter’s community room by skilled animal-handling volunteers, where they receive their vaccinations from a licensed veterinarian, assisted by a staff member. An AWLA volunteer then transports the pet back to the owner, who is provided with proof of vaccination as well as information on the AWLA’s other services.

Shelter veterinarian Dr. Erica Caldwell says these core vaccines are recommended for all healthy pets, with few exceptions. “Rabies is a fatal disease in people and animals, and it can be found in our area,” she said. “The vaccine is required by law for dogs and cats [over four months of age], primarily to protect the entire community — people and animals — from this horrible disease.” The feline and canine distemper shots provided at the clinics target several other serious viruses present in the community and the environment, Dr. Caldwell said. She points out that it’s important for pet owners to speak with their veterinarians every year about any other needed vaccinations and for regular check-ups.

Critically positioned volunteers help keep the drive-in clinics moving. “Dog runner” Jennifer Salan, who ferries dogs from cars to the clinic and back, says it’s all done on the dog’s terms. “You let the dogs go at their own pace, let them sniff, take treats, and if they’re really uncomfortable, we let their people come along to the yard with them,” she said. “So it’s a really accommodating environment.”

Salan said it’s rewarding to witness people taking such good care of their pets. “The owners are in their car, snuggled with their pet, and they know all the dogs’ habits, what they’re comfortable with and what they’re not,” she said. “You really get to see the human-animal connection.”

Gergana Siteva has served as both a greeter and a dog runner at the clinics. “The first thing is to introduce ourselves to the owner and make them feel comfortable entrusting us with their pet,” Siteva said. “Once we take the dog from the car, we try to make sure the animal’s not scared or stressed. We walk them around while we’re waiting to go in, pet and talk to them and if they’re small, we’ll carry them.”

A tiny, dark brown-and-black Yorkie who had been adopted from the shelter about a year ago returned for vaccines — and needed a bit of extra affection from Siteva. With sweet eyes and silky fur, the dog was a “hugger” who was very afraid of leaving her “mom,” Siteva said. With the team’s soft touch, she made it through just fine.

Volunteer Jonathan Edwards-Opperman generally helps socialize cats at the shelter and also assists with feeding and clean-up on a weekly basis; he has also become a “cat runner” for the vaccination clinics. Edwards-Opperman picks the cats up in their carriers from the cars, places a towel over the carriers to reduce the cats’ stress, and shepherds them into the community room for their shots. “While the vet is preparing the vaccines, I try to keep the cats calm and make them feel secure,” he said. “They’re kind of hunkered down because it’s so new and overwhelming, so petting them and letting them smell my hand generally helps.” Edwards-Opperman then passes on to the owners any observations conveyed by the veterinarian, such as need for a teeth cleaning or other care and even tips on any suggested weight loss.

“The clinics are really well set up, with distance between volunteers, limited people in the room, and a layout as one big circle so we don’t cross paths with each other as we take the animals through,” Edwards-Opperman said. “Knowing how people in the community are struggling and that their pets can help with mental health, the low-cost clinic is a really good idea. It’s a fantastic event.”

The Animal Welfare League of Alexandria is a local 501(c)(3) organization that operates the Vola Lawson Animal Shelter, Alexandria's only open-access animal shelter. In response to the global pandemic, the AWLA has initiated a virtual adoption process and is operating a Pet Pantry that has provided more than 9,000 pounds of pet food and supplies. The AWLA also offers assistance to Alexandrians with questions about wildlife and animals in the community. More information can be found at https://alexandriaanimals.org/.