Santa's visit sparks the spirit of the season. 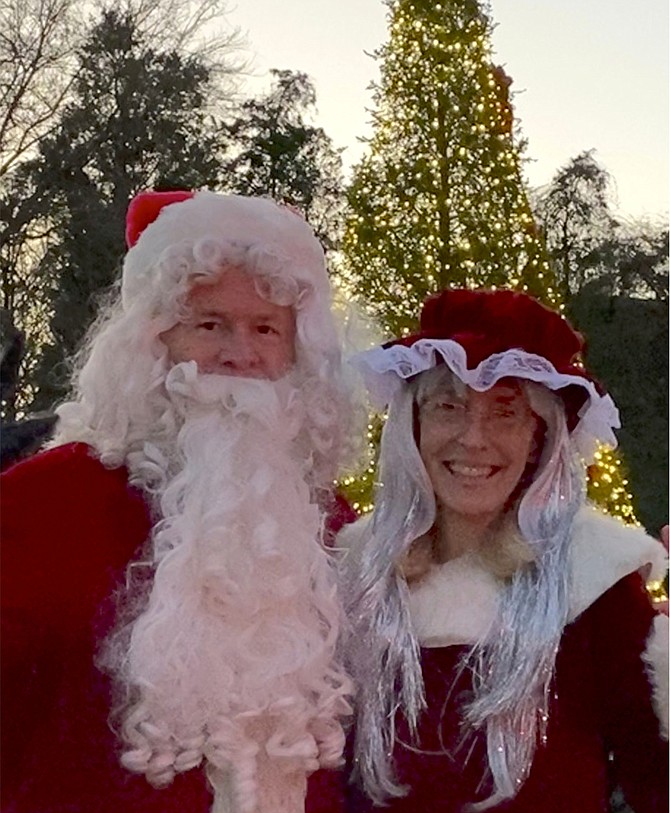 Santa and Mrs. Claus turn around to face their elves after lighting the tree. Photo by Mercia Hobson. 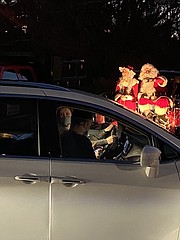 A mother looks back to be sure her children are ready to talk a moment with Santa. 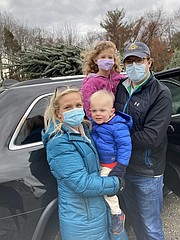 The Kidera family of McLean, Steve and Katie with their two young children Rory, 4, and Connor, 1, pose beside their car with a Christmas tree on top, re-creating 2020 style, the scene from the Norman Rockwell Christmas painting. The family purchased their tree at Sexton Family Christmas Trees in the Village Centre directly beside the Great Falls Christmas tree illuminated for the holiday season.

No way could Santa disappoint the children in Great Falls and miss the Annual Christmas Tree Lighting held this year on the Great Falls Village Centre Field on Sunday, Dec. 6. Surely Santa knew with Covid-19 and related public health issues, the children had already missed so many events in 2020. Santa said he always loved coming to Great Falls from the North Pole and anyway, "all nice the children are there. No naughty kids," he said.

Erin Lobato is Director of the Great Falls Citizens Foundation. The non-profit organization presented the Celebration of Lights and its annual tree lighting with a history that goes back to 1990. According to Lobato, Jackie Moore, who passed away in 1995, came up with the idea of erecting a tree on the Village Green. Holding tradition and the spirit of the season tucked close to their hearts, organizers at Celebrate Great Falls developed a plan to produce the event and keep everyone safe within the protocols for outdoor gatherings issued by Gov. Northam due to the State of Emergency.

Debbie Nagy, Vice President of the Great Falls Foundation said, "All of us are wearing masks. Volunteers are strategically placed along the planned drive-by route and no guests are allowed outside their vehicles." Organizers trimmed the scope of the event but not the joy of the holiday season.

With only a few minutes to spare as the clock ticked toward 5 p.m., Santa and Mrs. Claus hurried over to the 38-foot tall Norway spruce by SAB Lawn & Landscaping Inc., founded by owner Stephen A. Borcherding of McLean. The ceremonial countdown began. Ten, nine, eight, seven…until the magnificent tree, dressed in its 5000 lights and topped by a star, lit up against the backdrop of the dusk sky.

The children didn't seem to miss the add-ons from previous years. No pony rides; no petting zoo. They were at the Village Centre to see the man dressed in a red suit and talk with him. Santa took his time and answered the children's questions called out through car windows. "I like chocolate chip cookies," Santa said many times. Seated beside Mrs. Claus in the bed of a pickup truck, Santa posed perfectly for families to take photos of him and the Missus. Sight-lined directly behind them towered the majestic tree lit for the season. Masked elves accepted the children's hand-delivered letters, which Santa said he would read later.

After the drive-by, Sofia Georgopoulos, 5, of Great Falls, said, "Driving through was a little bit different…but I liked it… I wrote him a letter and it said… 'I love you, Santa. We will leave you cookies and carrots for your reindeer." Brother Ari, 2, said simply, "I like Santa." Mom, Rachael wished everyone a Merry Christmas. She added, "We are so thankful for all the volunteers who made this happen. It was so special.”

“A part of my mom lives on in this annual tradition that was a dream come true. Seeing the excitement in the children’s faces and joy this celebration brings to the community is what it’s all about,” said Debbie Moore Chason, Jackie Moore’s daughter.

Lobato thanked the many sponsors for the event, including AOG Wealth Management, Costa Family & Cosmetic Dentistry, 1ROOF, and The Old Brogue. Visit https://celebrategreatfalls.org/ to see the full list of sponsors.