The Other Alexandria: ‘Getting Ready to Cast My Vote’ – Cassie Reddick Whitmore
Votes

The Other Alexandria: ‘Getting Ready to Cast My Vote’ – Cassie Reddick Whitmore 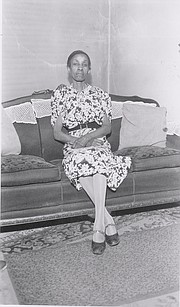 The 14th Amendment became law in 1919, making it possible for all adults to vote, but Virginia did not ratify the 19th Amendment until 1952. Women throughout Virginia protested for the right to vote and they were allowed to vote in the 1920 Presidential election. The Presidential candidate Warren G. Harding was favored by African Americans.

Cassie Reddick Whitmore was one of those African Americans who registered to vote on Sept. 30, 1920. She was ready for her role as a full-fledged citizen to vote for a President that will help African Americans.

It was a rainy day on Nov. 2, 1920; the local newspaper had predicted the day before that the women who are voting should not wear their fancy dress because the weather will be very wet. That predication did not keep Cassie from casting her vote for Warren G. Harding, the man that many African Americans wanted to see in office. He was the man of Lincoln’s Party.

As a homemaker, Cassie must have felt proud by having the right to vote for a winning ticket. When she registered to vote on Sept. 30, 1920, she registered at two precincts: the Friendship and Lee School in Alexandria. She wanted to make sure she was registered.

Cassie was the daughter of a former slave. Her mother and grandmother came to Alexandria as contrabands during the Civil War. Their fight for freedom was instilled in Cassie. When the fight for civil rights came her way, she took advantage of it.

Cassie, Mattie, Corinne and Mabel were the daughters of Paul Reddick and Elizabeth Alexander. Their parents married in Alexandria, Virginia on March 18, 1869 by S. W. Madden, an early pastor at Alfred Street Baptist Church. Paul was from Hartford, North Carolina and Elizabeth was from Loudoun, Virginia. Both of them came to Alexandria during the Civil War. They raised their children at 123 North Pitt Street.

On Sept. 26, 1900, Cassie married Charles Whitmore. Charles worked at the Navy Yard as a driver and Cassie worked at home. They owned their house at 314 ½ South Alfred Street.

Just eight years into their marriage, Charles Whitmore died at home leaving Cassie a widow and the children without a father.

Among Cassie’s siblings, she was the only one who got married. She had one brother and four sisters. Through Cassie’s descendants, her family history still lives on, especially through her great-granddaughter, Gale Arlene Brooks Ogden. Gale is the family historian and a member of Alfred Street Baptist Church where her second great-grandparents married in 1869.

Cassie was a trailblazer for women’s rights. She was determined to play her part in history and to fight with other women for the right to vote. She left her family a proud legacy.