Dropping Out of the Electoral College
Votes

Dropping Out of the Electoral College 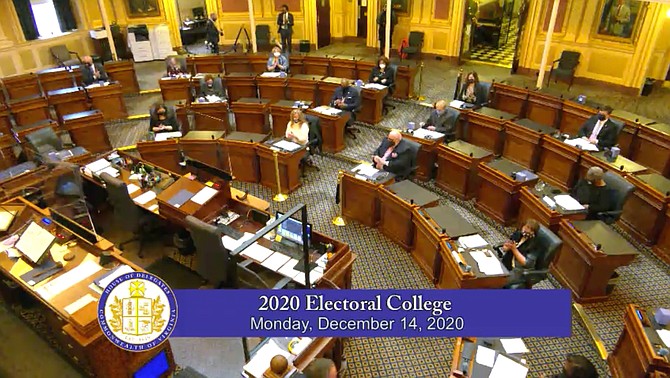 Virginia may be on the verge of dropping out of the Electoral College, joining a National Popular Vote Compact in an effort to ditch a presidential election system critics say is outdated and undemocratic. Once enough states have joined the compact to reach 270 electoral votes, Virginia and other states that have signed on to the agreement would award electoral votes to the winner of the national popular vote rather than the candidate who prevailed at the state level. So far, 15 states and the District of Columbia have joined the compact for a total of 196 electoral votes.

"If we truly believe in fairness and value democracy over partisanship, it is time to elect the president based on the people's will," said Ebbin. "This legislation affirms the core principle of American democracy — one person, one vote."

Earlier this year, Ebbin tried and failed to get the Virginia state Senate to agree to joining the compact. Since that time, Ebbin says, he has been able to persuade one Democrat on the Senate Privileges and Elections Committee who was a “no” vote to flip. Meanwhile, Del. Mark Levine (D-45) has already been able to get a majority vote for the compact in the House, which voted 51 to 46 in favor of entering the interstate agreement.

"It would say that every Virginian's vote counts. Whether you voted for Joe Biden or Donald Trump, it would all go into the national count," said Levine. "People would know that even if you're in the reddest of red states or the bluest of blue states, your vote is always counted."

"If we truly believe in fairness and value democracy over partisanship, it is time to elect the president based on the people's will."

Republicans are united in their opposition to the bill. During deliberations in the Privileges and Elections Committee and on the House floor, Republicans argued that deciding the winner of the presidential election using a popular vote rather than the Electoral College would be a disadvantage to rural areas. They fear that changing how the election is decided would transform how presidential candidates wage campaigns in a way that would disadvantage rural parts of southwest Virginia.

"You'd be having all the resources of campaigns focused on the major metropolitan areas and ignoring the people who live in the rural areas," said Del. Chris Head (R-17). "Instead of Virginia's votes counting, it would really be California's votes counting."

Advocates for the National Popular Vote Interstate Compact say the current system already overlooks rural voters in California, where Republican presidential candidates don't bother campaigning because Democrats have a deadlock on the state's electoral votes. Similarly, Republican candidates don't usually bother campaigning in states like Kansas because that state's electoral votes have essentially already been decided before the candidates have been chosen. Supporters of the interstate compact argue that the winner-take-all version of the Electoral College that's emerged over the years favors swing states to the exclusion of everybody else.

"The Electoral College, from my perspective, has racist origins," said Sen. Scott Surovell (D-36). "This is the best way to bring real democracy to this country because I think when most people vote for president they think they're voting for president and not for an elector to vote for president."

DITCHING THE ELECTORAL COLLEGE has been a goal of reformers for years, perhaps most notably after the 1968 election when a third-party challenge from Geroge Wallace came close to denying a majority in the Electoral College and potentially deciding the election in the U.S. House of Representatives. House Judiciary Chairman Emanuel Celler (D-New York) introduced a constitutional amendment that would have replaced the Electoral College with a system based on the popular vote.

The House approved the amendment with bipartisan support in September 1969 by a vote of 339 to 70, and President Richard Nixon endorsed the proposal. But the movement was derailed in the Senate, where Sen. Strom Thurmond (R-South Carolina) led a filibuster of southern states. Virginia Sens. Harry Byrd Jr. and William Spong, both Democrats, voted against cloture, essentially supporting the filibuster effort and killing the reform effort.

"As long as you have 39 senators opposed to this plan, it is evident this is not the plan the country needs," said Sen. Sam Ervin (D-N.C.) after the amendment was filibustered. "This kills it for the year."

The 1970 filibuster didn't just kill it for the year. Reformers have now essentially given up on the idea of passing an amendment to ditch the Electoral College and have moved on to other strategies, most notably the National Popular Vote Interstate Compact. Originally created in 2006, the interstate compact was designed in a way similar to agreements between states to regulate things like water rights and nuclear waste.

"Today, we continue the fight to make sure that every vote matters when electing the president," said Pam Berg of the League of Women Voters. "The time has come for our president to be elected in this just and simple way. To pass this bill now is to be on the right side of history."

"Up until 2008, Republican Party presidential candidates won this state's electoral votes regardless of how many African Americans voted for the Democratic candidates," said Jamelle Bouie, a resident of Charlottesville and New York Times columnist who testified in favor of the bill during the last General Assembly session. "That was the case throughout the south, and the absence of any way to count those votes and have them really matter for the outcome effectively disenfranchised a large portion, and at one point a majority, of Black voters in the country."

“Seems like there’s no point in having an election,” said Del. Israel O’Quinn (R-5).