Two Dogs, One Family Add Up to Joy for Everyone
Votes

Two Dogs, One Family Add Up to Joy for Everyone

“I think that’s our takeaway from 2020 — to take better care of the vulnerable among us.” 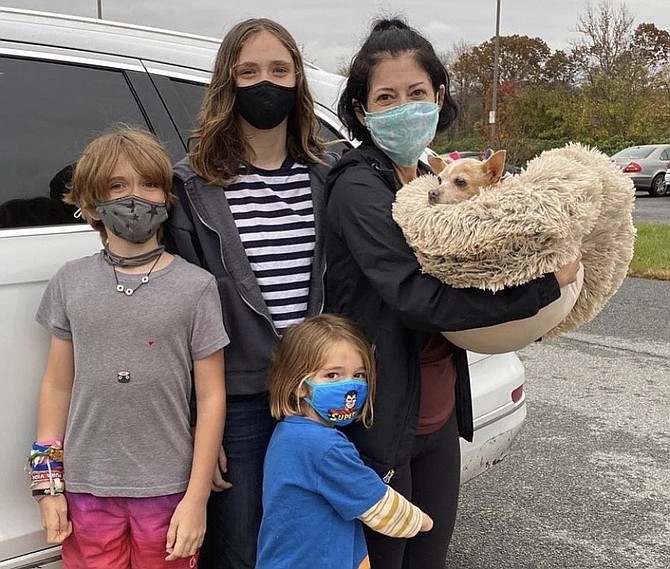 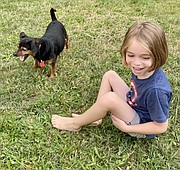 It’s never too late in life to find love. Even for senior dogs.

Mary Carter and her family know all about it. Carter, her husband and their three children — Chloe, 12, Jackie, 10, and Hugo, 4 — had left their California home, traveled the world for most of 2019 and then settled in Baltimore. To keep a promise Carter had made to the family, as soon as they bought a house they set out to find a dog.

Carter immediately thought of an old friend who was now the Executive Director of the Animal Welfare League of Alexandria, Stella Hanly. Was there, by chance, a special dog at the shelter that might fit in with Carter’s family?

Hanly described an eight-year-old Chihuahua mix who had come to the AWLA from a shelter in West Virginia; she was a gentle soul but also very playful. It wasn’t long before Carter and her children were meeting “Meemaw” on Zoom, seeing her rich brownish-black fur and floppy ears, and most of all, her sweetness. They were informed about her health challenges — a severe heart murmur, for which she was taking medications. It didn’t matter to them.

“We were so in love with her, we were prepared to move mountains to make sure that for her time left she’d feel loved, healthy and safe,” Carter said.

After undergoing dental surgery that left her with almost no teeth, Meemaw joined Carter’s family in August and seemed to thrive. She loved accompanying the family on walks and would routinely roll over to let them rub her rotund belly. She forged a special bond with oldest child Chloe, who was feeling especially lonely in the pandemic. Meemaw slept in Chloe’s room most nights.

A veterinary cardiologist told them that Meemaw might soon need treatment for her heart, but it didn’t seem to be urgent. But in October, Meemaw’s behavior changed dramatically; she had no appetite for her food and wasn’t interested in going for walks. An emergency room visit confirmed that Meemaw had a poor prognosis, and in a few days the family realized that the kindest thing for their beloved dog would be euthanasia.

“We were just in shock,” Carter recalled. “This had happened so quickly. But we decided we should keep our hearts open because Meemaw would have wanted that.” Maybe there was another dog out there to cherish?

Carter called Hanly at the AWLA once again. She told Hanly that in Meemaw’s memory, they would like to continue to adopt senior dogs who needed extra TLC. Hanly had had first-hand experience with another Chihuahua mix, this one a 12-year-old blonde pup known as Bella, who had been Hanly’s office mate for several weeks. Like Meemaw, Bella had been transferred to the AWLA from a rescue group and had significant health issues: She had needed surgery to remove multiple tumors, along with some major dental work. She also was suffering from heartworm, which would require several months of treatment. Carter thought she sounded perfect for the family.

Carter and her family adopted Bella on Nov. 12, and she is thriving. As sweet and mild mannered as Meemaw, Bella is on the shy side, so quiet that they added a little cat bell to her collar. She often stations herself in her favorite bed, brought home with her from the AWLA, and when she’s ready for human attention she stands up and looks at one of the family. Usually it’s Carter’s husband, James Christian, that she goes to. She’s chosen him as her favorite, though she loves the children and Carter as well.

Hanly is gratified by the family’s support of Bella. “I always think senior dogs teach people that every day together is a gift,” she said. “In a more practical sense, senior dogs are typically house trained and sleep a lot. They mostly just want to snuggle while you watch TV, and that suits a lot of people very well.”

Carter has no regrets about the family’s adoption choices. “We only had Meemaw for just shy of three months,” she said. “In that time we got the most out of what we had. We created a lot of memories, and we still talk about them: the first day we brought her home, things she did that surprised us. Now we’re creating memories with Bella. They enrich us and our lives, maybe for a few months, maybe for a few years. That puts more value on the time we do have.

“I think that’s our takeaway from 2020 — to take better care of the vulnerable among us.”

The Animal Welfare League of Alexandria is a local 501(c)(3) organization that operates the Vola Lawson Animal Shelter, Alexandria's only open-access animal shelter. In response to the global pandemic, the AWLA has initiated a virtual adoption process and is operating a Pet Pantry that provides pet food and supplies to community members in need. The AWLA also offers assistance to Alexandrians with questions about wildlife and animals in the community. More information can be found at https://alexandriaanimals.org/.