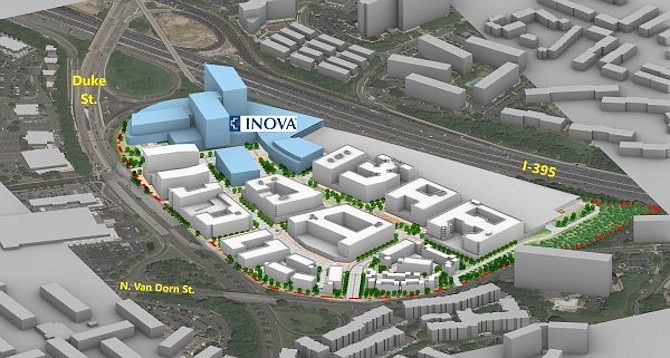 Concept drawing of the four-million-square-foot community that would include the relocated and expanded Inova Hospital along with residential and commercial properties, parks and multi-modal transportation. City of Alexandria

In a landmark move that could have repercussions for generations to come, city leaders are striking a deal with Inova to relocate the Alexandria hospital to the site of the old mall on the West End. The proposal calls for mixed-use urban development, including residential development, with transportation and park networks. Construction of the site could begin in 2023, with the first buildings completed in 2025.

“This plan for the future of the Landmark site is exciting, long-awaited news for our community,” said Alexandria Mayor Justin Wilson in a release. “The project would be a catalyst for the West End, providing significant benefits for Alexandria and the region at a time when focus on our long-term future is critical.”

Before construction, applications for special use and zoning permits from developers will have to be sent to the city for review and approval, a process that could begin as early as February. The hospital is expected to be a part of the initial construction process, according to city spokesperson Craig Fifer.

“We are thrilled for the potential to build a new hospital and medical campus, one that would allow us to expand our seamless system of care, increase our services, and elevate the facilities in Alexandria and throughout the region for decades to come,” said Stephen Jones, president and CEO of Inova, in a statement.

The hospital relocation could also heavily impact the West End’s perceived identity. The expanded hospital, along with the rest of the redeveloped site, could be a distinguishing factor for the Landmark Mall area.

“Landmark Mall really has the opportunity to be a gathering spot for the West End,” said Brigg Bunker, chief operating officer of Foulger-Pratt, a real estate firm partnered with the city government and the hospital in the relocation. “The new design will be anchored by large outdoor gathering spaces and parks that will really engage the community — not just those that live and work in Landmark Mall but the entire West End community.

This project is no small expense. Inova plans to invest about $1 billion dollars to create, expand and relocate its campus to Landmark Mall. According to the proposal from Inova and DC Area-based real estate firm Foulger-Pratt, acquiring the land to lease to the hospital is estimated to cost about $54 million. Preparing the site and infrastructure could cost an additional $76 million.

The city will start its community information process with a virtual meeting involving real estate developers and Inova on January 4 at 7 p.m.

Inova plans to sell its current Seminary Road location to residential developers before relocating to Landmark Mall, which means a separate process would begin to have the area rezoned for residential use. Inova’s plans to work with the city to request zoning for residential use will be further discussed at a virtual meeting on January 6 at 6 p.m.