Searching for a Superintendent for Arlington
Votes

Searching for a Superintendent for Arlington

Public asked to contribute views: What do you want in a new superintendent? 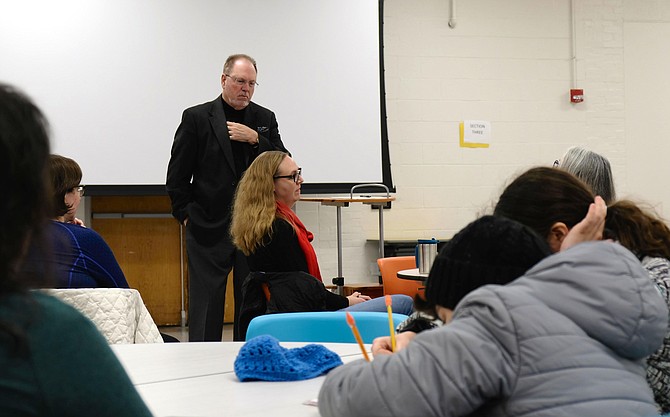 Dr. Wayne Harris, part of the two-member search team looking for a new superintendent of schools, talks to a focus group of parents who are active in Advisory Councils on Instruction at Syphax, on Friday night, January 24th. Photo by Eden Brown.

Parents showed up at 7 p.m. on a Friday night and 10 a.m. on a Saturday morning to weigh in on a personnel decision. They were there to weigh in on what the replacement for recently retired superintendent of schools, Dr. Patrick Murphy, should look like. They were critical of Murphy’s tenure, and if there was one message they conveyed, it was that the new superintendent should be different. A series of outreach activities was held last week, with two consultants from BWP Associates, to solicit views from parents.

“We are tired of being a stepping stone,” said one parent, who did not want to be identified by name. “We don’t want someone who is just checking a box on the way to a bigger job.”

Dr. Murphy announced his intention to retire last summer, a week after APS reached an agreement with the Department of Justice to settle a complaint filed during the 2015-2016 school year alleging one of its schools failed to provide adequate support for English learners. He and his assistant superintendent, Dr. Tara Nattrass, left APS at the same time.

BWP search consultants were hired to find a replacement for Murphy – a new superintendent who meets the criteria set out by parents and the school board. BWP associate Kevin Castner said BWP has done more than 90 successful superintendent searches, and he personally has done 20 in the state of Virginia. He recently found the Superintendent of Schools in Falls Church. He said his firm has a good track record of success (superintendents who are doing well) because they have a good process. That process depends on input from many different sources, including parents and students.

“We will evaluate the applicants on their track record,” said Dr. Wayne Harris, who, along with Kevin Castner, forms the team that will look at candidates for the school superintendent job. “Kevin and I have 93 years in education.” he said, “We do a thorough background check on applicants. We check references they didn’t provide, not just the ones they listed. We want to know what their level of sincerity is about this job, versus furthering their career.

Parents on Friday night told Harris one important quality they wanted to see in the new superintendent was recognizing diversity. Another big “must” is accountability. “There isn’t any, across the board, in APS,” said one parent who is active on the ACI. “Knowing how to effect change, making evidence-based decisions, and putting the focus on students, not awards and recognition. That’s what we want.”

Another major concern cited by parents was “reaching out better to bilingual families, particularly the English-learner families. They don’t know how to convey their views to the school administration. It’s the squeaky wheel that gets what they want, but the English learners aren’t squeaky. Many African-Americans aren’t either. “

It was clear parents were looking for a communicator: someone who likes to talk to people and then prioritize what needs to be done. Members of the ACI, Arlington’s Advisory Councils on Instruction, said they felt it was important to listen to people who aren’t on the ACI. “One size doesn’t fit all in Arlington, said one parent. “Some immigrant families in the south are just able to make rent, but in North Arlington, the house selling for only 1.5 million dollars is the cheapest house on the block.”

“A candidate who can heal; there is a lot of damage done by the previous superintendent and assistant superintendent,” said another parent. “So, building trust again is important.”

BWP associate Harris made it clear their hope is to solicit views on what the person should look like, but they can’t drill down on specific job description-like skills that Arlington residents might want, like: “must value foreign language study.” That said, Harris offered, “a public report will come out, listing the characteristics you have listed. If you disagree with what we write, or want to add to that, you can weigh in.” Once the search team narrows down the pool of applicants to those who meet the criteria – normally about four applicants, but sometimes more – the school board will choose from those identified.

At the Friday evening focus group of ACI members, one parent said, “We want to know: what have they done to show they are the right candidate. We want accountability: the problem with accountability is big, even at the central office level.”

The Saturday morning meeting of parents at Dorothy Hamm Middle School was equally clear about moving beyond the old administration. As an example of the kind of change one parent wanted to see, a Yorktown parent said he was concerned that acting superintendent Cintia Johnon had appointed a new principal at Yorktown without engaging the parents. “They never surveyed the parents about what they wanted.” In general, he said, the school system should be willing to at least do a survey before making a decision.

Other parents chimed in, however, noting that surveys are not necessarily the answer. Parents said they had the impression the schools just wanted the surveys to validate where they were already headed. Surveys aren’t really taken seriously, several said. “If you say what they don’t want to hear, they don’t listen. It’s an echo chamber.” There were multiple nods around the room. “Arlington schools administrators just want to talk about what’s good; but when there are things that aren’t good those need to be addressed.”

None of the parents who spoke at the meeting wanted to be identified. “I still have kids in APS,” said one Yorktown parent, “And I don’t want my kids to have to take the hit because I was vocal. When I raise a problem, I become the problem,” he continued. “I just want to make it better, but the school doesn’t see it that way.”

The suggestion boxes put out by the new principal at the Dorothy Hamm Middle School were mentioned as a more effective way to solicit input.

Parents asked that the new superintendent look at achievement differently. Parents complained about the lack of leadership in instruction. “It’s a great school system but it has been riding on the coattails of its national ranking for a while,” said another parent. Differences in instruction, often as a result of overcrowding in the classrooms were also raised as an issue. “The challenges for our schools are just going to get harder going forward. Good management skills will be paramount.”

One of the refrains heard at both meetings was the need for good interpersonal skills and a good relationship with teachers. Many had complaints about the previous team’s failure to relate to teachers. “Teachers said he didn’t understand their job,” said one parent familiar with teachers in APS. “He never asked what he could do for them to make their job easier, he didn’t seem to view his job that way, and he had only limited experience teaching at the beginning of his career, so his views of what was happening in the classroom were not up to date. And teachers were wary of being fired or reassigned if they were too vocal.”

The survey allowing parents and students to provide their views on what the next superintendent should look like will close on February 2. To fill it out, see: https://www.apsva.us/engage/search-for-new-aps-superintendent/ and at the bottom of the survey, there is an opportunity to weigh in in more detail, directly, to BWP consultant Dr. Kevin Castner at kccastner@yahoo.com or to the following address: