Serving Up BBQ and Patriotism in Herndon
Votes

Serving Up BBQ and Patriotism in Herndon 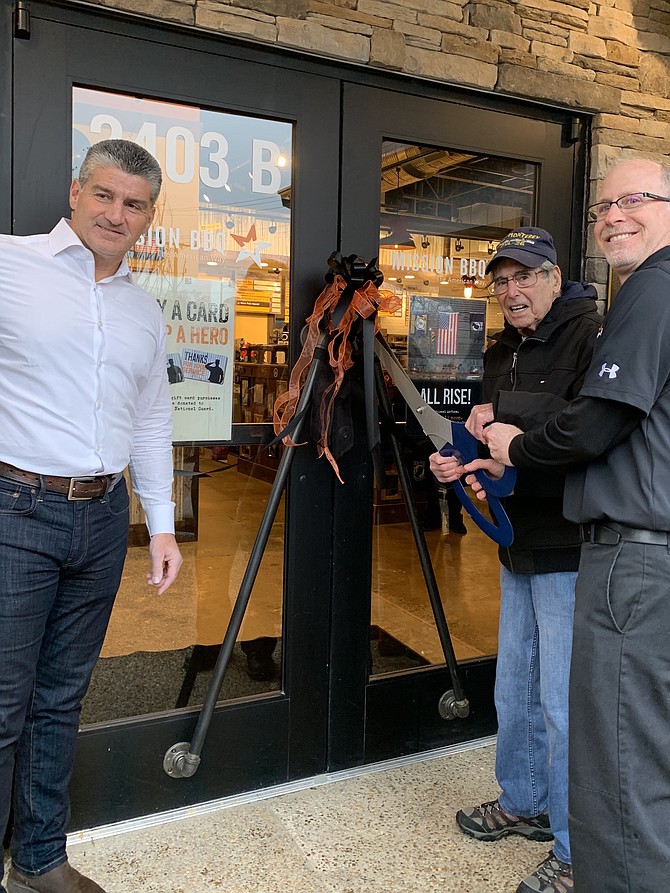 Herndon Police Color Guard at the ribbon-cutting for MISSION BBQ. 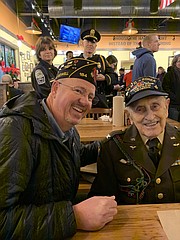 On Opening Day at MISSION BBQ in Herndon, guests David R. Womack, Commander of the Herndon/Reston American Legion Wayne M. Kidwell Post 184, and retired Navy radar operator Sig Alman, who served on the USS Monterey during World War II, get to know each other a little better.

MISSION BBQ opened a new location in Herndon, at noon, Monday, Dec.16. Co-founder Bill Kraus hosted the Grand Opening celebration for the fast-casual restaurant located at 2403B Centreville Road. A crowd of nearly 70 people, including local dignitaries, law enforcement and fire and rescue personnel, veterans, active-duty military and the public, attended the event. Retired Navy radar operator Sigmond Alman of Oakton, who served on the USS Monterey during World War II and retired Air Force Colonel Robert A. Shawn, took part in the ribbon-cutting ceremony and served as guests of honor.

According to opening tradition, Kraus stood outside on top of "Bam Bam," MISSION BBQ's big mobile barbeque assist machine, and addressed the crowd. "Wanting to build a business that had purpose, had meaning, had significance, we opened our first MISSION BBQ in Glen Burnie, Md., on Sept. 11, 2011, and damn right, we did that intentionally. Intentionally that ten years after this world changed as we all knew it, in some small way, we're going to try to change it back. We are going to remind people how fortunate we are to live in this amazing country. What makes this country so great are our heroes. How do we define a hero at MISSION BBQ? It's anybody who will stand in a line and raise their right hand and swear to protect, serve, and save. You can do it in your community or if you put on the cloth of our nation and fight to keep us free and to keep us safe," said Kraus.

Patriotism is the core of MISSION BBQ, according to Kraus. Every day at noon, staff and patrons stop what they are doing and in a show of respect sing the national anthem, hats removed and hand over hearts. Opening day was no different with a salute to the Stars and Stripes. The ceremony kicked off with "The Star-Spangled Banner" performed live by Fairfax County Police Lieutenant Tim Field, McLean District Station, "a local uniformed American hero," said Kraus. The ribbon-cutting ceremony followed immediately afterward with Shawn doing the honors and Alman beside. Then, everyone went inside and enjoyed authentic BBQ served in a dining room filled with tributes to those who make the United States great.

According to Kraus, as a former Under Armour, Incorporated marketing executive with 25 years' experience, he and Steve Newton, a restaurant industry veteran with 20 years' experience at Outback Steakhouse, co-founded and opened the doors to their first Mission BBQ believing there was "nothing more American than BBQ." They also believed, he said that there was nobody more American than the brave men and women who swear to protect and serve communities and country.

Looking around the dining room filled with military, police, firefighters and first responders chowing down on BBQ and sides, Kraus said, "What is never lost on me is that we get the easy job. We just get to serve food and say thanks to our heroes."