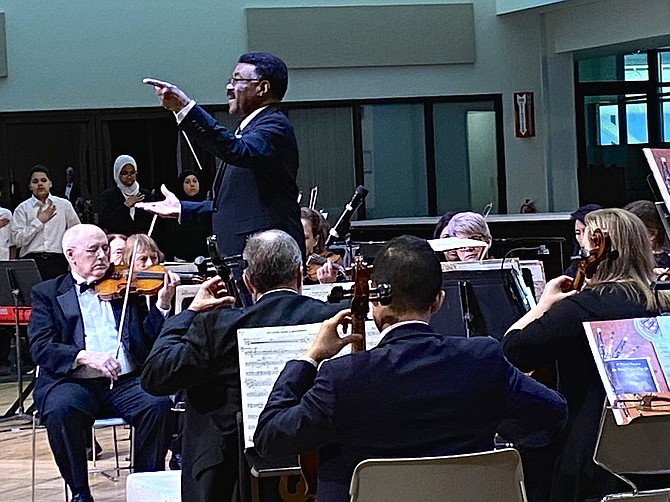 The Reston Community Orchestra, under the direction of Dingwall Fleary, Music Director, combines the traditions of African American culture with western classical music, paying tribute to Dr. King's vision of a society free of prejudice and racial divisions. Photo by Mercia Hobson. 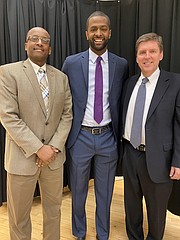 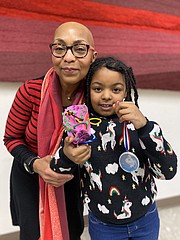 Sophia Quinn, 6, granddaughter of Deborah Green, shows off art projects she created based on the history of Dr. King Jr. and the Civil Rights Movement. 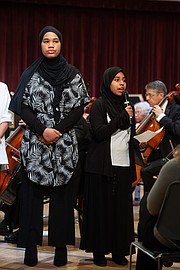 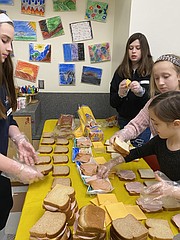 This year's "Reston Dr. Martin Luther King Jr. Birthday Celebration" offered opportunities for service, inspiration and learning. Yet, according to keynote speaker and CNN analyst, Bakari Sellers, King wrote he was in Birmingham because injustice was there. “Little did I know when I signed up, the fight was literally here…90 miles away (in Richmond),” said Sellers. “A fight for justice reform and equal representation.”

At the first event of the celebration, Saturday's scheduled Community Service Projects, volunteers sorted 30 bins of donated toys, according to Laura Greenspan of Reston, board member of The Closet of Greater Herndon. Nearby, members of the Omicron Kappa Kappa Chapter of Omega Psi Phi Fraternity, among them Brother Shaun Marzett of Fairfax, Brother Dr. Gary C. Powell of Reston and Brother Steven Moses of Woodbridge, sorted bins of toys. "There's a unity that you see here, the diversity of ages and races coming together for a greater cause," said Powell.

Down the hall, Sophie Hupe, and sister Emily, 11, unpackaged applesauce containers for bag lunches and later would help Caroline Susla, 14, of Reston and sister Katherine, 12, prepare sandwiches. "It's important for us to give back," said Caroline.

At 4 p.m., people gathered at Reston Community Center-Hunters Woods to hear the Reston Community Orchestra, under the direction of Dingwall Fleary combine the traditions of African American culture with western classical music, paying tribute to Dr. King's vision of a society free of prejudice and racial divisions. Featured artist, Beverly Cosham of Reston, waited for the program to begin, as did the other artists, Bryan Jackson; the RCO String Quartet; Kurt Usowski, Cello; Fred Rupert, Violin 1; Gary Mosteller, Viola; and Jeannine Everett, Violin 2; and the children of Al Fatih Academy who would recite Dr. King's "I Have a Dream" speech.

SUNDAY featured two performances, the first, "Music of the Movement" at Hunters Woods, the CenterStage. Paul Douglas Michnewicz, Director of Arts and Events at Reston Community Center, said, "Paige Hernandez and the rest of her outstanding musicians have mined the best music of the Civil Rights, drawn connections with the music and movements of today and created an extraordinary concert of relevance and artistry."

Northern Virginia Hebrew Congregation in Reston hosted Sunday's second performance held at their venue. It represented the 30th Anniversary of the "Voices of Inspiration of Martin Luther King Jr. Christian Church" and a commemoration of the life of "A Drum Major for Peace" Dr. Martin Luther King Jr., according to Rodney Scott. "The program featured four groups and two solo performances. The Voices of Inspiration have drawn various groups over the past 30 years to this wonderful celebration of both its anniversary and the life of Dr. King. It is significant that over those years, we have included choral groups from Reston and other groups in the area," said Scott.

On Monday, the official holiday for Martin Luther King Jr. Day, Bakari Sellers, CNN political analyst, a rising star within the Democratic Party and a leading voice for his generation according to Reston Community Center's Celebration program, served as the featured speaker. Sellers provided the Keynote Address before the Community Luncheon Program. Beverly Cosham, Chair of the Reston Community Center Board of Governors, introduced Sellers.

Cosham said that Sellers made history in 2006 when, at 22 years old, he defeated a 26-year incumbent State Representative to become the youngest member of the South Carolina state legislature and the youngest African American elected official in the nation.

IN HIS KEYNOTE ADDRESS, Sellers detailed the Civil Rights Movement and his present-day efforts, fighting for justice reform and equality. He tied his remarks together, centering on two photographs of his father. The first, when his father was a young man dressed in a "seersucker suit." He sat in the White House with other men, "holding his own" and having a conversation with President Lyndon B. Johnson, who had just signed the Civil Rights Act. The year was 1964.

The second picture was taken two years later. Sellers said, "It's a Press Conference in Mississippi. The jacket and tie are gone and my father is in a white t-shirt, looking far older than he did just two years prior…serious, stern, angry." Sellers described the deaths of multiple Civil Rights icons, which occurred between the two years the photos were taken and his father's active role at that time as he fought for freedom.

"Two years, two photographs and all that death violence in between. See, that's what happens...when you stand firm in the face of bigotry and hate...that's what happens when you find your friends buried in a ditch because they speak out for justice."

“That's why I'm here in Reston today," said Sellers. “That's why you all came to this place. I'm here because of the fight that's here. Little did I know when I signed up, the fight was literally here because we are 90 miles away from some crazies… It's in rooms like this, in New York, Minneapolis…with people with sound minds and good hearts…countless individual fights for justice reform and equal representation under the law."