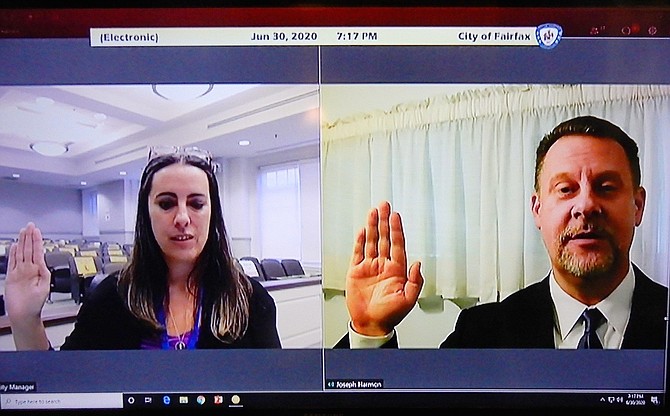 Although it had to be done virtually this year, Fairfax City’s Mayor, Council and School Board were officially sworn in last Tuesday, June 30. City Clerk Melanie Crowder gave the oaths of office to Mayor David Meyer and Councilmembers Janice Miller, Sang Yi, So Lim, Jon Stehle, Tom Ross and Joe Harmon.

And Gerarda Cullipher, chief deputy clerk of Fairfax County Circuit Court, swore in School Board members Jon Buttram, Mitch Sutterfield, Toby Sorensen, Bob Reinsel and Carolyn Pitches. Then Meyer thanked the voters and said all those elected bring a broad range of talents to their jobs.

“Every two years, we choose among our neighbors and friends individuals who will make decisions about our future,” he said. “It’s done openly, and without fear of intimidation, in fair and honest elections. We should never be complacent about this.”

MEYER then listed some of the accomplishments of the outgoing Council, including:

“Much of the hard work for all of these things is due to the dedication and commitment of our City employees,” said Meyer. “They work tirelessly every day on our behalf, and we are immensely grateful for the service ethic, honesty, creativity and support they exhibit every day to make our City’s operations and services more effective and efficient.”

However, he added, “We’re also facing some unprecedented challenges. The COVID-19 pandemic is far from over, and we continue to discern the most optimal choices in moving forward to keep our citizens safe and support our local businesses.”

FURTHERMORE, said Meyer, “The national demands for great social justice and equity have found many voices in our City, right in our own neighborhoods, faith communities and civic and cultural organizations. The elected leadership has heard these demands for change, loud and clear. We will address them at our July planning meeting and will create a framework and process by which we can collectively assess and decide what changes to make, and when, where and how.”

He told the residents that whatever the City does will be consistent with the community’s core values. “These challenging discussions will occur in an open, transparent, collaborative and respectful manner that is inclusive and reflects the diversity we all affirm,” said Meyer.

He then extended a collective thank-you to outgoing Councilmembers Michael DeMarco and Jennifer Passey for their service. (Both chose not to run again). “Beginning with Michael’s work on the Economic Development Authority and Jennifer’s work on the Planning Commission – and their subsequent years on City Council – they’ve given us their best,” said Meyer. “They’ve left a legacy for which they can be justly proud and for which we will be continually thankful.

“We have much to do,” he continued. “I invite all citizens to join us in the next chapter of our self-governance. And remember that, when it comes to the City of Fairfax, the best is yet to come.”