Stakeholders and county supervisor speak out. 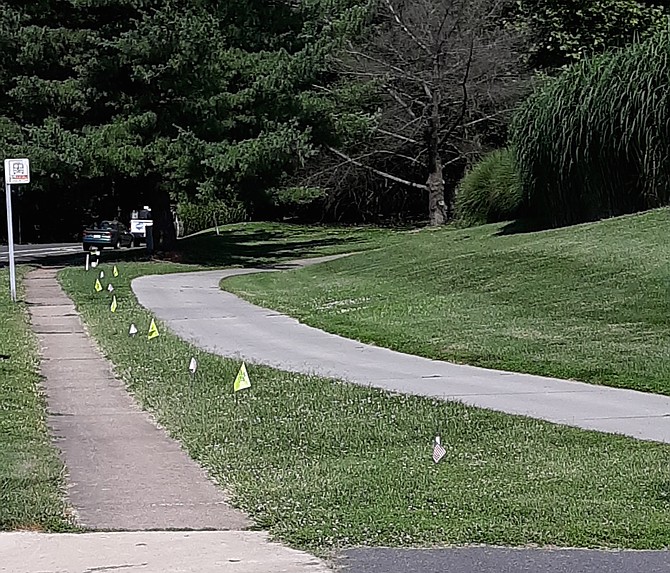 “Save Hidden Creek” flags go up around the golf course in Reston. Photo contributed

It is approaching three years since Connecticut-based real estate developer Wheelock Communities announced its acquisition of Hidden Creek Country Club in Reston. The Fairfax County Comprehensive Plan designates the property to be a golf course. In early June, Wheelock began exploring public reception to its vision to repurpose the private golf course and country club into a public park and sites for new homeownership. With that one move, Rescue Reston, an all-volunteer grassroots organization dedicated to saving green space, prepared once again for a possible clash with a developer. The organization had waged a successful four-year battle defending the green space at Reston National Golf Course. This time, it launched a campaign to save Hidden Creek open space.

Dan Green is Principal with Wheelock Street Communities. Scott E. Adams at McGuireWoods LLP spoke on Wheelock's behalf and shared information about the proposal for Hidden Creek. Reston National Golf Course and Hidden Creek have the same zoning and land use designations. Both properties are termed "private recreation use, more specifically to remain as golf courses," according to FairfaxCounty.gov.

Adams said part of what they are trying to do is reimagine Hidden Creek-take what is currently a private country club "serving about 400 members" and transform that into a significant public park amenity open to all in Reston. "The creation of a 100-acre public park in the heart of Reston is a generational opportunity for the rest of the Reston Community...Our goal is to have that conversation with community and all stakeholders...We are having meetings with the clusters and the neighbors that are directly adjacent to Hidden Creek because they are the most impacted by the changes to the property," said Adams. He added their community outreach includes mailings to surrounding communities and online virtual meetings meant “to have a conversation with those neighbors and then get feedback." Adams said that they had registrations equivalent to about 25 percent of the people surrounding the golf course in one of their online meetings. He added they held meetings June 8–June 11 and would continue doing more moving forward.

Lynne Mulston is chair of the Rescue Reston North Committee. She expressed disheartenment at the prospect of Hidden Creek Country Club considered for anything but a golf course. "We'll stop when Wheelock stops," she said. Rescue Reston called attention on its website that the golf course is home to a variety of wildlife. Reston residents and visitors make use of the community resources on abutting trails. The permeable ground helps maintain the health of the downstream watershed.

THE ORGANIZATION created an online "Advocacy Action Center" for the public to contact its representatives to voice their agreement that the County should not compromise on Reston's remaining open space. It urges officials not to re-open the Comprehensive Plan for either of Reston's golf courses.

Seeing the response over the weekend of July 10-12, Mulston said, "Rescue Reston's North Course Committee is elated by the outpouring of support and the sheer numbers of supporters who are participating in the Action Center Campaign. To date, upwards of 500 respondents have sent nearly 6,000 emails to Supervisor Alcorn, Chairman McKay, Planning Commissioner Carter and the Reston Association Board of Directors. A function of the Action Center allows us to see the locations of the respondents on a granular level, giving Supervisor Alcorn exactly the information he is seeking in order to make a determination that tells Wheelock, ‘NO’ to their requests for an out of turn amendment to the Comp Plan."

Supervisor Walter Alcorn (D-Hunter Mill District) said, "As you are aware, the Fairfax County Comprehensive Plan clearly designates the Hidden Creek property as a golf course. And I have long and consistently stated – including during last year's supervisor election, and since – that unless and until communities surrounding the golf course indicate their desire to initiate a change to the Comprehensive Plan, I will oppose any such change. That could potentially be demonstrated as a vote by cluster association members, although I have yet to hear that any such vote has taken place. Also, I have let Wheelock know that if there is uncertainty surrounding any reported votes of support in surrounding communities, my office would conduct an independent survey of residents to confirm."

ALCORN added, "I do realize my position may seem unusual in Reston, where we have become conditioned to top-down land use decisions, perhaps starting with the excellent Master Plan developed by Robert E. Simon in the 1960s. With the full use of the comprehensive plan process in Reston starting in 2014 proposals to change the comp plan to allow more development will now need support from the residents most affected before I would authorize consideration of any out of turn comp plan amendment."