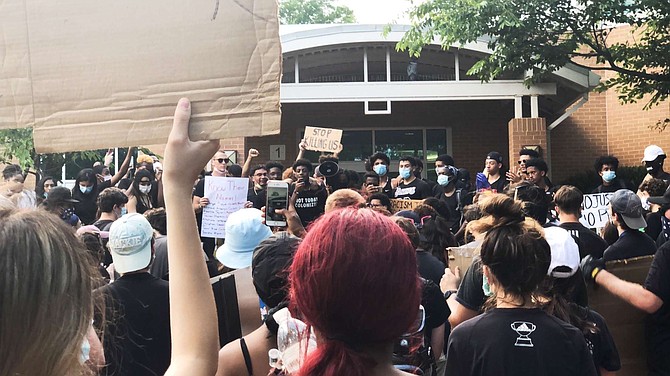 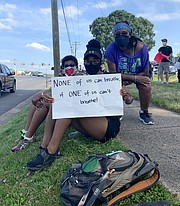 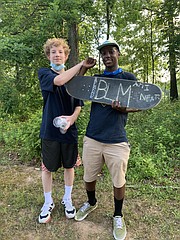 From left: Daniel Smith and Cory McDonald of Springfield.

Protesters lay on the ground in front of the West Springfield Governmental Center in honor of George Floyd.

The protest was organized largely by young adults. One of the organizers, Rachel Fleming, estimated that more than 500 people gathered that day, despite the 90-degree weather.

Silence was rare; almost every moment was filled with chanting and passing cars beeping in support. Hundreds of drivers and passengers decorated their cars, held signs up to the windows, and lifted their fists in solidarity as they drove by.

Many protesters shared their stories and the reason they came to protest.

“Even when I was on active duty I was discriminated against. It was subtle, but it was there. I have gone into stores when I was on active duty and people assumed that I couldn’t buy what I wanted to buy and refused to wait on me. I’m in uniform, military uniform, and somebody thinks I’m an elevator operator. Over time that stuff builds up,” said Roxana Baylor. “I think we—my generation—need to be handing off to [younger] generations a better place to live. It’s a shame that Black boys and men are constantly looked upon as subhuman. They should not have to fear for their lives when they have no weapons and they’re in a non-violent situation.”

“We have a serious issue in this country when it comes to racism and systematic oppression of our Black and Brown brothers and sisters. It’s been too long, and it’s 2020 and we shouldn’t have to be out here now. We need to have changes in our government all the way to the top,” said Nadia Ruffner.

“Black people in America really have to deal with this every single day. Everybody else… can go home at night and take off that sign, but I can’t take off my skin color. I decided because… I still have the privilege of being alive, and not to be one of these cases, that I have to just show it,” said Cory McDonald of Springfield.

“We’re out here to just support the Black Lives Matter movement and make sure that everybody knows what’s going on in the world,” said Makida Solomon of Springfield. “Police need to be held accountable for their actions.”

Around 6:10 p.m., protesters began to march through the streets from Old Keene Mill to Rolling and down to WSHS.

“We live in West Springfield, it’s a diverse community and it’s just nice to see all these people out here supporting us. This is just one step in our city; we’re doing what we can to make a change,” Morrow said in an interview.