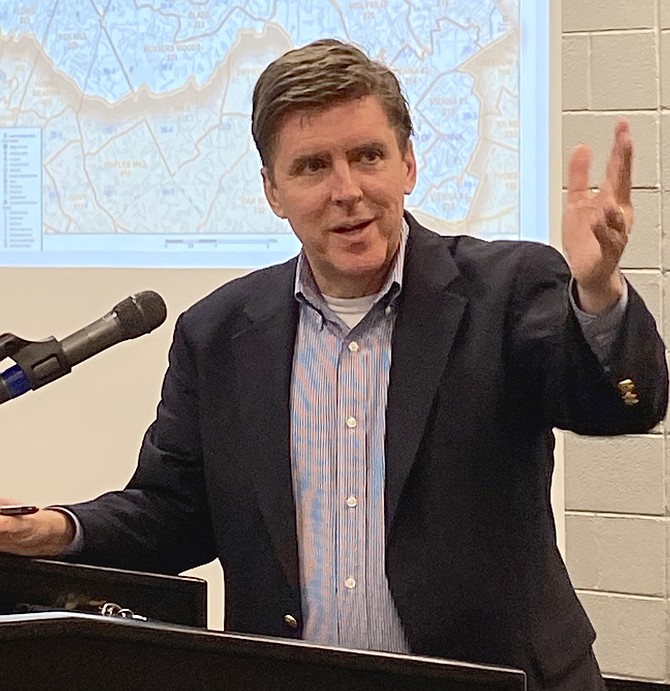 Hunter Mill District Supervisor Walter Alcorn (D) held his first Town Hall meeting in Vienna on Feb. 26. As the meeting was about to begin, residents shared topics of interest and concern. Beth Glicket of Vienna said, "I'm curious on what happens at Town Hall meetings." As for what she might ask Supervisor Alcorn, Glicket said, "What are your parameters; what do supervisors oversee. There's a lot." Michael Kowal of Reston said he wanted to hear Supervisor Alcorn's plans for roads, especially for the James Madison High School parking areas. "Inadequate," he said.

Supervisor Alcorn kicked off the meeting, discussing his priorities for Vienna and the Hunter Mill District. Alcorn said he presented his first board matter at the Jan. 14 Supervisors meeting, initiating a process to Review and Amend Reston’s Comprehensive Plan. Alcorn said he would be putting together a balanced task force, engaging the public to participate in the process, one that would likely include several people in the room. "The task force, at my direction, will be run on an open process," he said. He estimated the Plan Review and community engagement would be every other week for about a year and cover topics he laid out in the motion on Jan. 14.

ONE THING TO REVIEW, Alcorn said, was how the County dealt with affordable housing. While there was some “good language” in the Comprehensive Plan for Reston, there wasn't much language that talked about the preservation of affordable housing, according to Alcorn. "If you don't get out in front of that, if you don't actually have some policy approaches, then (gentrification) becomes inevitable,” he said.

Another area on the Plan that would benefit from additional study to ensure affordable housing was land use. "Not sure how much more we're going to be able to get in terms of new affordable housing from new development, but that is definitely something that's on the agenda," said Alcorn.

The next thing they'd look at, setting aside density and affordable housing, was how to get new development done. "The language in the Comprehensive Plan, needs to be reviewed and probably be addressed, but this is part of the community discussion," he said.

According to Alcorn, one of the first things in a Plan Review was to look at properties that have been "resolved" to the new Comprehensive Plan. That was important because there were two significant steps in the land development approval process. One was comprehensive – that's what they'd be looking at again. The second was zoning. Alcorn said, "So, typically, what happens is a developer will come in and attempt to rezone a property to the new Comprehensive Plan. That's how Reston got these 52 properties resolved during the last five years. And the important thing to know about rezoning, particularly in Virginia, is that it is a one-way street. Once the property is resolved, undoing that zoning only happens if it is the property owner.” It was a tremendous challenge to manage that growth, to make sure the infrastructure was in place to support it.

However, when the property landowners come back through the process to do something more than getting the density, that was the time to get them on the opportunity – parks, streets, intersections with nearby neighborhoods, setbacks.

THE SECOND KEY PRIORITY Alcorn addressed related to transportation on a personal basis – pedestrian and bicycle safety, including crosswalks that warn drivers pedestrians are coming into them. Education played a vital part for pedestrians, cyclists, and those who drive as well, however, the problem correlated with urban design. "We have to really stop designing, all of our transportation facilities for cars, particularly in our urbanized areas around their transit stations. Those have got to be as friendly for people and bicyclists, as they are for autos. That's a huge change for all of us, but it's also a huge change for regulators for the Virginia Department of Transportation," Alcorn said.

Alcorn proposed new ways to generate affordable housing, saying that in Fairfax County, there were old underutilized offices, surrounded by parking lots with no nearby residential neighbors who would be upset about the change to the site. There were commercial shopping centers, long strips of highway no longer economically robust. "These are the types of properties that we can all agree, fantastic opportunities for real, affordable housing for mixed-income communities… Convert those properties to more productive uses.