The Other Alexandria: The Way It Was: Calvin D. Terrell
Votes

The Other Alexandria: The Way It Was: Calvin D. Terrell 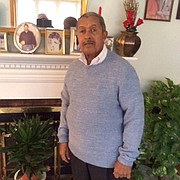 A visit with Calvin D. Terrell in Alexandria, Virginia was like going back in time. He was born in 1935 in the West End section of Alexandria, when it was known as Falls Church. The African Americans in the West End were a close-knit family. Many of the individuals that lived in that area during the time that Calvin was born had been there prior and during the civil war. These families were interrelated by blood and marriage.

As a young boy, Calvin lived with his godparents, William and Ida Wanzer. When he was younger, he had a job delivering papers in the West End neighborhood. This job allowed Calvin to know all of the families that lived in the Seminary, Quaker Lane and King Street areas. His paper route included the Virginia Theological Seminary area as well.

Going down memory lane, Calvin can name families throughout the West End, especially families who lived near Oakland Baptist Church on King Street; they were the Wanzer, Crone, Douglas, Henry, Terrell, Colbert, Belk and Robinson families. He also remembered the slaughtering of pigs in the neighborhood, especially at Mr. Wood’s house.

Calvin said, “It was a lot of chickens running around the community and my dad had a cow.” It is hard to image that King Street and Quaker Lane had livestock running around in the yards and streets.

Calvin remembers when the U.S. Army Camp was located at the present day Safeway and at the local gas station. He also remembers what the landscape was like before Farlington and Parkfairfax were built. He said, “That we used to walk from Seminary to Green Valley in Arlington, Virginia. We would go to a baseball games in Arlington.”

After the building of Farlington and Parkfairfax during the 1940s, one could no longer see Green Valley from Seminary Road but one was still able to walk to Green Valley by using a back road.

Also, Calvin saw the great boxer Joe Louis training in the area of West End. Calvin said that Joe Louis sometimes stayed in Arlington, in the black neighborhood. He said, “My elders told me that boxer Joe Louis sometimes stayed at my uncle William and my aunt Rebecca Terrell Boswell’s house in Arlington. I checked with a couple of older residents of Arlington and they confirmed that Joe Louis stayed at a boarding house in the Johnson Hill’s neighborhood in Arlington. Calvin continued his story about Joe Louis by saying that, “Joe would jog from Green Valley in Arlington to Quaker Lane, to Bailey Cross Roads and to King Street.” I asked Calvin if he ever went to any of Joe’s fights? He said, “No. We just listened to Joe’s fight on the radio.”

Calvin’s memory of his neighborhood touches the heart. He also recalls the many families he knew that have left the Seminary area. For Calvin, he reminisces about those gone by days when he used to deliver newspapers to the neighborhood and had conversations with the neighbors.