Friends of Dyke Marsh were quick to respond. 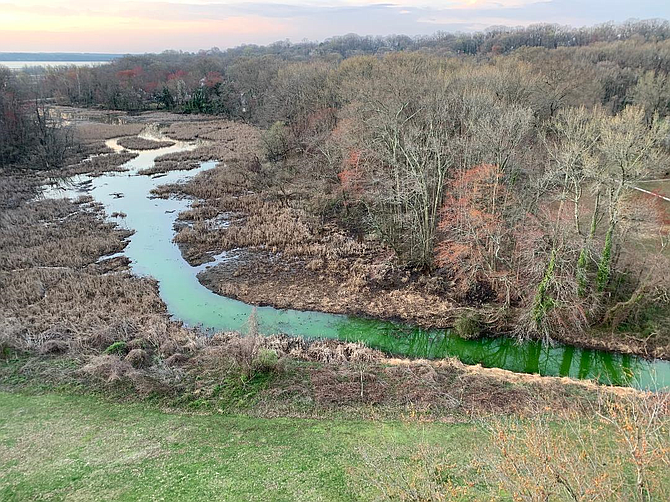 In the midst of the COVID-19 pandemic, somehow this unnamed creek in the Mount Vernon area turned bright green. It was almost neon green, so

the Friends of the Dyke Marsh jumped into action and brought in officials from various Fairfax County departments to monitor the incident.

Initially they attributed it to a prank, dye poured into the water, or another plumbing entity tracing a leak from somewhere up stream, but it still remains a mystery.

The Dyke Marsh is fed by two creeks that flow in from the northwest direction, under the George Washington Memorial Parkway into the Dyke Marsh, adjacent to the Potomac River.

On Friday, March 20, nearby residents Laura Sebastianelli and Mike Sieriacki noticed the creek color and took a few pictures of the stream behind River Towers Condominiums, which were sent to others in the group, including Glenda Booth, the president of the Friends group.

“I was going to take a sunrise image and noticed it was green,” said Sebastianelli.

The first picture was taken about 7:15 a.m. on Friday morning, and about an hour later, county officials were on site doing water samples.

Throughout the day, Booth reached out to officials from various county environmental and wastewater officials, and the National Park Service that oversees the parkway, and got various responses. Much of it led to the speculation that the green water was caused by a dye, but they don’t know the source of it. Since the area is part of a tidal area, it could have flowed in from the Potomac River.

The use of harmless dye to find a leak is a common practice in the plumbing industry, although on this day near Dyke Marsh there were no reported occurrences of this.

"Dye is commonly used to see if a toilet’s flapper is leaking water from the tank into the bowl that can cause a lot of water usage due to the leak," said Andrew H. Simpson, Master Plumber at Sagewater in Alexandria. "The leak shows that the flapper would need to be replaced," he added.

The Marsh Lives On

The Dyke Marsh is along the river bank in certain parts and is healthier now than it was years ago, but still suffers from trash, microplastics and invasive species like the hydrilla plant that can be seen in many areas of the Potomac River.

The water was an orange color a few years ago, but that was attributed to an influx of sediments that eroded into the creek upstream, just down the hill from Richmond Highway.

The source of the green water may never be known, but the Friends group was happy with the response. If it was toxic, it could have had long lasting impacts.

“The Friends of Dyke Marsh appreciate the prompt response of all of the authorities. We understand that they are speculating that the source of the neon green color was some kind of dye, but we are not aware that anyone tested for dye. Nor did they eliminate algae, benign or harmful, or report on the health of microscopic aquatic organisms. The good news is that the visually detectable discoloration is gone, but questions remain,” said Glenda Booth, president of the Friends of Dyke Marsh.

The National Park Service is working with the U.S. Army Corps of Engineers to restore Dyke Marsh Wildlife Preserve. Construction of a 1,500 foot breakwater to help protect the marsh from erosion, shield the marsh from storms and encourage the accumulation of sediment, which is necessary for marsh regeneration. Located just a few miles south of Alexandria, Va., Dyke Marsh is one of the largest remaining freshwater tidal wetlands in the Washington metropolitan area. Dyke Marsh is viewed as a national treasure that holds extensive value not only for plants and animals, but for its recreational, educational and cultural purposes. It is estimated that the southern marsh has existed for 2,200 years, and the northern marsh has existed for 500 years.

Dyke Marsh provides a storm buffer for the George Washington Memorial Parkway, a natural filter for the Potomac River, and habitat for a variety of plants and wildlife, including six state-listed species of special concern (two bird species and four plant species).

It is critical to act now to protect and restore Dyke Marsh. Approximately 270 acres of marshland were damaged from the 1940s to the 1970s through the dredging of sand and gravel. In 2009, NPS partnered with USGS to investigate the state of Dyke Marsh. USGS found that the post-mined marsh is rapidly shrinking as a result of erosion caused primarily by storm waves driven northward up the Potomac River. Erosion in the marsh averages between 6 and 8 feet per year. USGS found that without intervention, this unique ecosystem would be entirely lost by 2035.