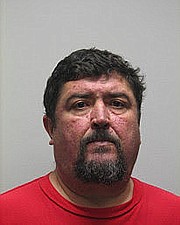 Fairfax County police have arrested a man on five felony charges in connection with an April 10 fire that destroyed a single-family home in Chantilly’s Franklin Farm community. He is Rogerio Ribeiro, 52, of Herndon.

Officers responded shortly before 4 a.m. for a report of a disturbance in the 13500 block of Coates Lane. But when they arrived, they discovered the home was fully engulfed in flames. They also encountered Ribeiro trying to leave in a car.

Police say he allegedly pointed a handgun at the officers. However, after a struggle over the firearm, they were able to safely disarm him and take him into custody. One person injured in the fire was treated at the hospital and released, but an injured dog remains under a veterinarian’s care.

Based on preliminary findings, investigators with the Fairfax County Fire Marshal’s Office charged Ribeiro that day with arson and setting fire to damage another’s property. He was taken to the Adult Detention Center and held without bond.

Detectives from the Major Crimes Bureau also responded to the scene and began investigating. They later charged Ribeiro with additional crimes – aggravated malicious wounding, cruelty to animals and two counts of assault on a law-enforcement officer.

Anyone with information about this incident is asked to call the Major Crimes Bureau at 703-246-7800, option 2. Tips may also be submitted anonymously through Crime Solvers by calling 866-411-8477, texting “FCCS” plus the tip to 847411, and via http://www.fairfaxcrimesolvers.org/. Anonymous tipsters are eligible for cash rewards of $100 to $1,000 if their information leads to an arrest.