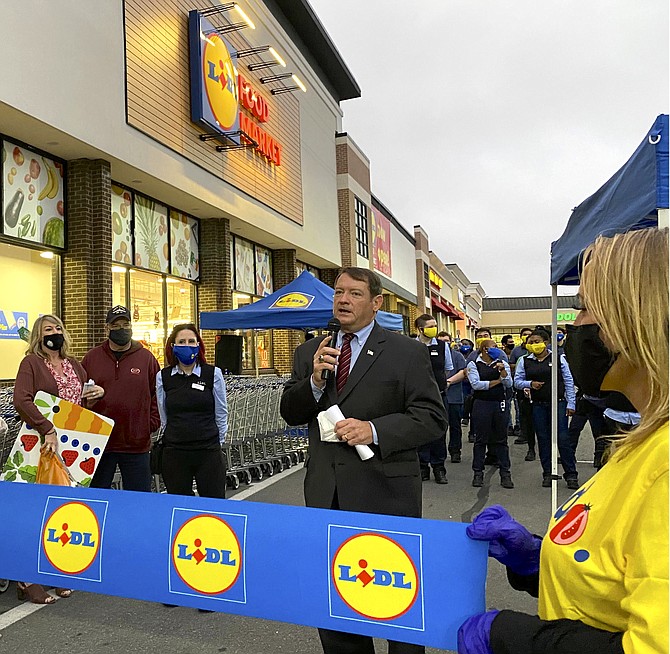 Supervisor Herrity (right) thanks Lidl for investing in the community at the ribbon-cutting ceremony, with (from left) Brooke Freel, Lidl management; first in line shopper; store manager Richelle Thompson, with her store staff in background. Photo by Susan Laume/The Connection

In a line that rivaled those for recent early voting, about 200 shoppers awaited the opening of the new Lidl grocery store in Burke at the Rolling Valley Shopping Center on Old Keene Mill Road on Oct. 28. The first shopper, in line about 4 a.m, and the next 99 received gift certificates valued at between $5–100 dollars, along with shopping tote bags while supplies were available.

Cassie Porter, student, and her friend, Mariel Otero, food truck owner, both of Springfield, expressed excitement about the opening and the excuse to grab a coffee and have an outing with a friend as they waited in the line that snaked through the shopping center driveway. Debbie Hawks, retired, Springfield, was in line early “hoping for a gift card”, saying she “loves Lidl” from her trips to the current Springfield location. Gifty Dodoo, home health nurse, Burke, indicated this “grocery store is very close to me and I’ve been waiting. I knew I’d meet a lot of people here. I want to get inside and see what they have for us.”

While Hawks might not have arrived early enough to receive a gift card, there is little doubt Dodoo will be happy with the store. Local shoppers know the store from area locations in Springfield and Woodbridge; known for variety and reasonable prices. New store manager, Richelle Thompson, previously assistant manager at the Springfield location, said she “knows quite a few were waiting” for the Burke location opening; several of whom she’s gotten to know. In the new store she said, “My focus will be availability and our great customer service.”

Lidl, a German company with its United States headquarters in Arlington, has a targeted expansion plan for stores on the east coast; now with stores open from Long Island, New York to Atlanta, Georgia. Supervisor Pat Herrity (R-Springfield) said, “I love coming to these.” He was on-hand to cut the opening ribbon, thanking Lidl for investing in the community and bringing more than 50 new jobs to the supervisory district.