A Salute to Veterans in Alexandria
Votes

A Salute to Veterans in Alexandria 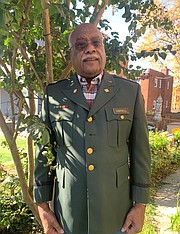 Capt. Lynnwood Campbell, U.S. Army: “I decided at 12 years old that I wanted to be a captain in the Army. I was in JROTC in high school and ROTC in college. Upon my college graduation in 1970, I received a commission as a finance officer. I was assigned to the Military District of Washington D.C., where part of my duties was to act as a survivor assistance officer. Five times I was tasked with telling parents that their sons were killed in the line of duty. After completing my active duty commitment, I joined the 2290th Mobile Army Surgical Hospital (MASH) unit as finance officer. I had a great experience in the military and along with Nelson Greene Jr. convinced the Alexandria School Board and the Army to create the JROTC program at T.C. Williams High School. My service was a privilege and I would do it all again.” 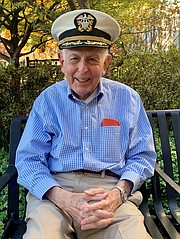 Comdr. Paul S. Frommer, U.S. Navy (ret.): “I served 23 years on active duty in both the Atlantic and Pacific, including two tours in Vietnam. I had a ROTC scholarship and most of my duty was in destroyers. My last tour of duty was command of the destroyer USS Barry and our home port was in Athens, Greece. I would do it all again. It was wonderful and a privilege serving this country.” 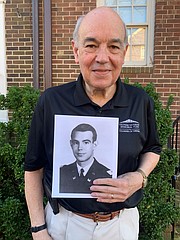 Capt. John O. Woods Jr., U.S. Army: “I was commissioned as a Corps of Engineers officer but opted to go into Army aviation. I flew helicopters in Vietnam and was shot down on the 26th of October in 1967. I spent three years at Walter Reed putting Humpty Dumpty back together again, but I refer to my time in the hospital and convalescent leave as defining my future life, which has been absolutely wonderful.” 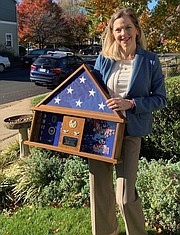 Col. Jennifer Krischer U.S. Air Force (ret.): “My 25 years of service would not have been possible without the support of my family and husband, who restarted his career as an attorney several times just to enable mine to support and serve our country. I was deployed to the Middle East for a year, missing my daughter’s kindergarten year and son’s third grade year. My family was amazing in supporting me in supporting our troops.”

Major John Bordner, U.S. Air Force (ret.) center, with Ander Bordner and SN Vargas at Coast Guard boot camp graduation in Cape May, N.J., in 2015: “Whereas Memorial Day is a time for solemn remembrance of those who died for our country, Veterans Day should be a celebration of the service of our past, current and future veterans. And with that I couldn’t be prouder of my son Ander carrying on the tradition of service to our great nation.” 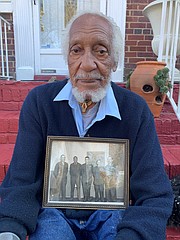 Charles Nelson, U.S. Air Force: “I went into the Air Force in 1952. My service took me to quite a few places, including being stationed in Alaska before it became a state. I was in communications – we were spying on Russia back then. I met a lot of guys that I stayed in touch with over the years but many of them have passed on. But if the Lord lets me see the 12th of March next year, I will be 90 years old and am thankful for everything He has given me.” 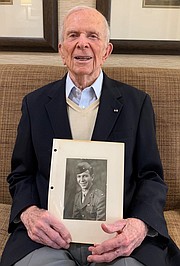 Capt. Bill Vosbeck, U.S. Marines: “I joined the Marine Corps during World War II since I knew the Marines were being so successful overseas at that time. I remained in the reserves when the war ended and when the Korean War came along, I had to report to duty immediately. When my time in the service ended, my wife Betty and I decided to make Alexandria our home and I started my architectural firm. I am thankful to the Marine Corps for what they did for me throughout my career. Two of my cousins, who were brothers, were killed during World War II during their service in the Army Air Corps. I was fortunate to be at the right place at the right time.” 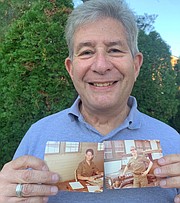 SSgt. Harvey Stoler US Army (ret.): “I served in the U.S. Army reserves from 1971-1993 as a Sergeant First Class at the brigade level. My civilian job was as a civilian personnel management specialist. I think what I value most from my time in the military is what I learned about myself and the friendships and networking I was able to do during my time of service.” 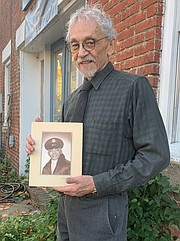 Staff Sergeant David Martin, U.S. Air Force: “I studied Clinical Laboratory Technology in the Air Force and that’s what I do now. I use the same tools and equipment in my work as a jeweler. My three years of service helped shape the career I have now.”

Arden Levy, U.S. Army Major 12-year veteran, and Col. Tony Sanchez, U.S. Army (ret.) 28-year veteran, married 22 years: “My experience with service changed my life,” said Levy, a member of the Judge Advocate General Corps. “It was a way for me to serve my country and defend those who have defended this nation. The JAG corps is a very mission-focused organization and there was no better way for me to start my law career.”

For more than 100 years, America has been honoring its veterans on November 11, marking the date in 1918 when the Armistice with Germany went into effect as the sound of artillery went silent along the Western Front in France. The hostilities of World War I had come to an end.

U.S. President Woodrow Wilson formally proclaimed Armistice Day the following year on Nov. 11, 1919, saying, "To us in America, the reflections of Armistice Day will be filled with solemn pride in the heroism of those who died in the country’s service and with gratitude for the victory, both because of the thing from which it has freed us and because of the opportunity it has given America to show her sympathy with peace and justice in the councils of the nations."

An act of Congress was approved in 1938 making Nov. 11 a legal holiday known as Armistice Day. Congress later amended the act to replace "Armistice" with "Veterans," and Veterans Day became official on June 1, 1954.

Due to COVID-19 restrictions, formal events marking Veterans Day were canceled, although private ceremonies were organized to honor Alexandria’s veterans.