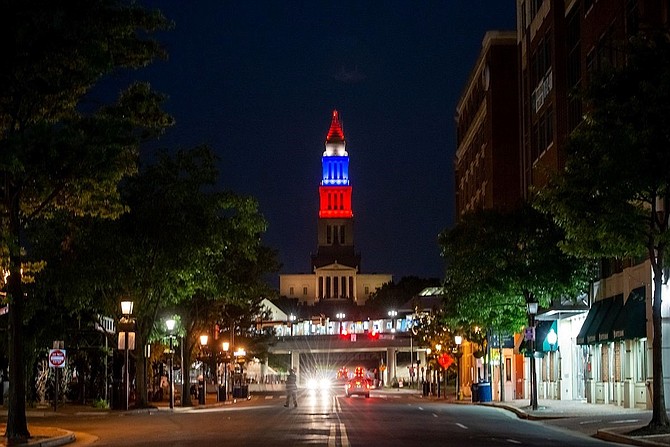 The George Washington Masonic National Memorial, lit up in June to celebrate the 2020 graduating class of T.C. Williams High School, can be seen for miles across the region and is one of Alexandria’s most iconic landmarks. Photo contributed 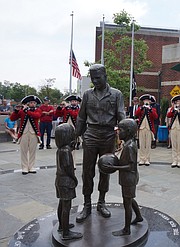 The Captain Rocky Versace Plaza and Vietnam Veterans Memorial honors the service and sacrifice of the 68 men from Alexandria who either died in Vietnam and the surrounding area or remain missing in action. The plaza is located in front of the Mount Vernon Recreation Center in Del Ray.

Photo by Ja’Mon Jackson for City of Alexandria 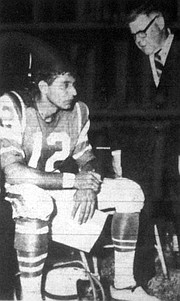 Joe Namath talks with New York Jets coach Weeb Ewbank during Namath's professional NFL debut in Alexandria on Aug. 7, 1965. The Jets played their first preseason game against the Houston Oilers at what was then George Washington High School. 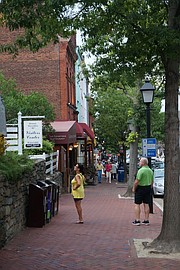 Located in the Ramsey House at 221 King St., the Alexandria Visitors Center features a selection of brochures, maps and tickets to area attractions, as well as a gift shop highlighting local products.

Alexandria has for centuries been known primarily as the hometown of George Washington, attracting history aficionados from across the globe to its cobblestone streets and lively waterfront.

But even as the pandemic has diminished the usual three million yearly visitors, local residents have risen to the challenge in working together to keep neighbors safe and neighborhoods thriving.

“Alexandria is a little big city with a hometown feel,” said retired Alexandria police sergeant Stafford Farmer-Lee. “We have an extremely diverse population, diverse businesses and historic landmarks within the city. The people are friendly, city staff are attentive and we are always moving forward in a progressive environment.”

Alexandria has some darker history too. The Freedom House Museum (now closed due to Covid) on Duke Street was once part of the headquarters for the largest domestic slave trading firm in the United States, Franklin and Armfield. Enslaved people were brought from the Chesapeake Bay area. Families were separated and individuals were sold, brutally forced to the slave markets in Natchez, Mississippi and New Orleans either by foot or ship.

History buffs will know that U.S. president Gerald Ford was a longtime resident and that U-2 pilot Francis Gary Powers lived here after he was released from a Soviet prison in 1962.

And Earl Lloyd, who grew up in a segregated Alexandria, was the first African American to break the color barrier in the NBA in 1950.

But even sports buffs likely are not aware that it was in Alexandria where NFL Hall of Famer Joe Namath made his pro football debut on Aug. 7, 1965. Namath and the New York Jets took on the Houston Oilers in a preseason game at what was then George Washington High School.

Namath had just signed the richest contract in pro football history and as the Alexandria Gazette reported at the time, “the eyes of the sports world will be focused on Alexandria to see just how he fares against the play-for-pay boys.”

At 15.4 square miles and with a population of just over 150,000, pre-pandemic Alexandria hosted nationally recognized events such as the Scottish Walk Weekend and Del Ray’s Art on the Avenue. But off the beaten paths of King Street and Mount Vernon Avenue are attractions such as the Tomb of the Unknown Revolutionary War Soldier and the National Inventors Hall of Fame.

One of the city’s most obvious landmarks is also one of its best kept secrets. Located on 36 acres overlooking Old Town, the George Washington National Masonic Memorial was built in the 1920s as a memorial and museum highlighting the contributions of Freemasons to the United States. The structure also serves as a research center, library, community center and performing arts center and offers one of the best panoramic views of the city.

Tucked away on a side street in Old Town is the less obvious “Spite House.” At just 7 feet wide, it is one of the tiniest historic homes in the nation. Built in 1830, the private residence was constructed by John Hollensbury using the existing brick walls of the adjacent homes to prevent horse-drawn wagon traffic from using the alleyway.

King Street in Old Town and Mount Vernon Avenue in Del Ray serve as the shopping and dining hubs of the city. Both are lined with locally owned boutiques and restaurants that are open and adapting to COVID-19 guidelines.

The Birchmere in Arlandria has reopened for live performances while a wide variety of virtual classes are available for children and adults at The Little Theatre of Alexandria on Wolfe Street, where Dermot Mulroney and Academy Award winner Marcia Gay Harden honed their craft.

Even as the pandemic has changed the landscape of the city, there really is no place like Alexandria to call home.