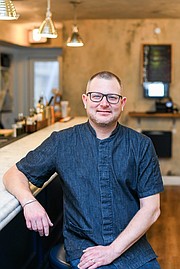 Sheer coincidence that Chef Edwards found himself facing off against Chef Mimi Huynh of Sunday in Saigon? Edwards won.

Through multiple courses, battling multiple competitors, Hank & Mitzi’s own Chef Chris Edwards came out on top of the Food Network’s “Chopped” competition last week, facing off against competitors from across the country – and Edwards’ own back yard in Alexandria.

Edwards thinks it was sheer coincidence that he found himself facing off against Chef Mimi Huynh of Sunday in Saigon, and though all his opponents were formidable, he found himself the victor in the end.

“I feel really excited; I got a lot of nice comments from friends and people who have come to the restaurant and seen (the show),” Edwards said.

But for anyone who thinks this is simply an evening in a restaurant truncated to a few minutes’ worth of airtime, think again.

“It’s completely different from a restaurant scenario,” Edwards said. “Usually in a restaurant we have a lot more time to come up with that stuff!”

The pressure, too, is completely different than a normal night of service.

“It’s difficult; it’s a pressure unlike you can even imagine, especially an unfamiliar place,” Edwards said, addinging he kept telling himself, “Just don’t cut yourself, and make sure everything gets on the plate.”

The episode of “Chopped” that Edwards was featured on was actually filmed about a year ago, he said, in an environment that is completely different from the pandemic-facing world we’re living in today. But now, Edwards is ensconced in the kitchen at Hank & Mitzi’s at 600 Montgomery St., having helped reopen the suite of Hank’s Oyster Bar establishments as covid-related restrictions were lifted over the summer.

“Things are going pretty well when you consider the fact that we don’t have the capacity to fill our dining room like I would. We are lucky enough to have plenty of outdoor seating,” he said.

Indeed, Hank & Mitzi’s has about 50 seats available for indoor dining and about 60 additional seats outdoors. The restaurant will look to use space heaters to keep al fresco diners warm for as long as possible this year.

Edwards was surprised, too, that some customers are coming into the restaurant just to see the new “Chopped” champion in action.

“I know it’s a popular show, but sometimes you don’t realize how many people are going to notice you,” he said.