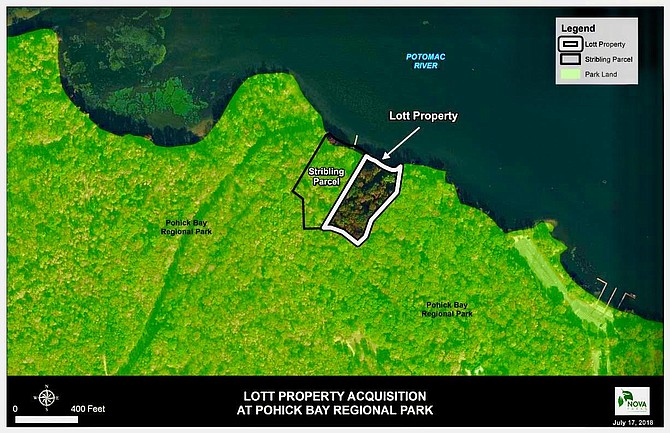 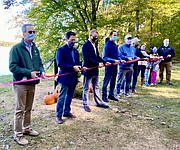 NOVA Parks held a ribbon cutting ceremony at Pohick Bay Park on Oct. 17 to celebrate additions to its land holding there. The second of two private residential properties, that predated the creation of the park in 1972, now joins the public space. The land purchase assures that the full 1,010 acres making up the park will remain in conservation, free from residential development and road building.

In remarks, Fairfax County Board of Supervisors Chairman Jeff McKay and Supervisor Dan Storck noted the high value area citizens place on parkland, with about 16 percent of the County’s territory comprising parks. They acknowledged the assistance of the State General Assembly, especially Delegate Mark Sickles, along with those members in the audience, Senator Scott Surovell and Delegate Kathy Tran, in working on funding approval for the park purchase; securing $600K for completing the suffragists memorial at the nearby Occoquan Regional Park; and budgeting funds for staffing two positions at Mason Neck State Park.

Contributions for Pohick Bay from the Virginia General Assembly provided $322K, from the Commonwealth’s Land Conservation Foundation; with the same amount sourced from the NOVA Parks’ Capital Fund. A federal grant of $644K from the Federal Land and Water Conservation Fund completed financing for the two parcel “Lott” property.

LOCATED ON MASON NECK with views of Pohick Bay, the “Lott” and adjacent “Stribling” properties had retained private ownership and access through the park since the park’s inception about 60 years ago. The Stribling property was purchased by NoVA Parks in 2018 valued at $2.1 million (see Connection, April 19, 2018). The earlier Stribling purchase also was made possible through a series of conservation grants from the federal Land and Water Conservation Fund, and the Virginia Land Conservation Foundation.

Houses that now sit on the land will not be immediately removed. However, the space acquisition “opens the possibility of expanding camping towards this area. And .. this area might see habitat restoration and additional water access points for the public”, said NOVA Parks Executive Director Paul Gilbert. The popular park welcomes about 1,000 users on an average summer Saturday for camping, hiking, and water activities.

The park bond funding question on the 2016 election ballot, which helped to make the Pohick Bay acquisition possible, passed with 66.4 percent voter approval; receiving the highest favor of all ballot questions in that presidential election year. Voters again this November will have the opportunity to vote yes or no on park and park facilities bonds totaling $112M; $110M for the Fairfax County Park Authority, and a $12M contribution for NOVA Parks regional authority.

NOVA Parks authority was established initially in 1959 to acquire and protect natural land and receives annual contributions from Fairfax County and other area jurisdictions. Sixty plus years later, the regional authority encompasses over 12,000 acres, including an extensive 50 miles of shoreline, held in the public trust.

RECENTLY, NOVA Parks has been in the news related to development under consideration near the Occoquan Regional Park, to turn a portion of the County’s landfill property into a ski resort. Proposals include tying Occoquan Park to the private ski enterprise by gondola or a mountain coaster. County supervisors, park and tourism officials, and the nearby Art Workhouse have eyed the public land lease with company built, owned and operated facilities, as a possible tourism draw and revenue stream. Others bemoan development of the land and loss of opportunities for restoration to natural habitats at the landfill, preferring passive recreational use. Under the Virginia’s Public-Private Partnership Act (PPEA), the opportunity for public comment continues until November 17 (submit to: clerktothebos@fairfax-county.gov).

As NOVA Parks Board Chairman Michael Nardolilli reminded participants, “Natural land provides ecological services, bringing pure water, clean air, and healthy places for recreation.” Paraphrasing the advice given to Scarlett O-Hara by her father in “Gone With the Wind,” Nardolilli said, “Land is the only thing that matters, the only thing that lasts.”