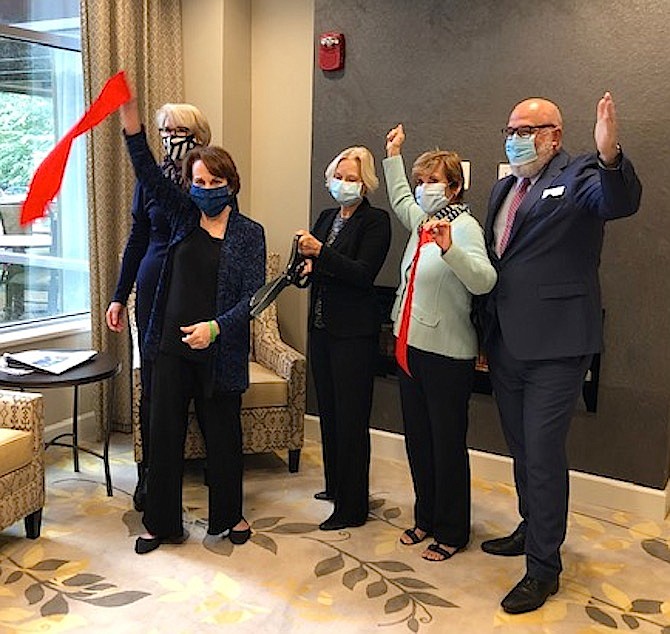 A bevy of shovels signaled the groundbreaking of Culpepper Garden 1 Renovation on April 11, 2018. Now a world away and 2-1/2 years later, ribbons fly as Culpepper Garden holds a virtual celebration on the completion of the project.

The renovation included a facelift for the apartments with new energy efficient windows as well as new floors and replacement fixtures for kitchens and bathrooms in 204 apartments that had been built in 1975. In addition, the project included six completely new units. The renovation extended to state-of-the-art kitchen enhancement, and common areas were refurbished with renovation of elevators, a new roof and additional parking.

Culpepper Garden is Arlington’s largest affordable community for low-income elderly, and as Arlington County Board chair, Libby Garvey, pointed out during the celebration, “the only one that offers both assisted living and independent housing.” Residents pay rents based on their income.

Garvey urged everyone to come tour the facilities. “It’s gorgeous. It’s just the feel of the place.”

In the meantime you can see the transformation with a virtual tour at https://culpeppergarden.org/.

This recent renovation is the most recent step in a journey that began in 1971 when the Unitarian Universalist Church of Arlington founded Culpepper Garden. In 1975, 204 independent living units opened, followed by 63 independent units added in 1992. Finally, 73 assisted living units were added in 2000. Today Culpepper Garden includes 340 apartments built on four acres in the heart of Arlington using HUD programs and with the assistance of local and state housing funds.