Seniors and their loved ones, aware of the high risk of COVID-19, have been devising ways to safely stay connected. 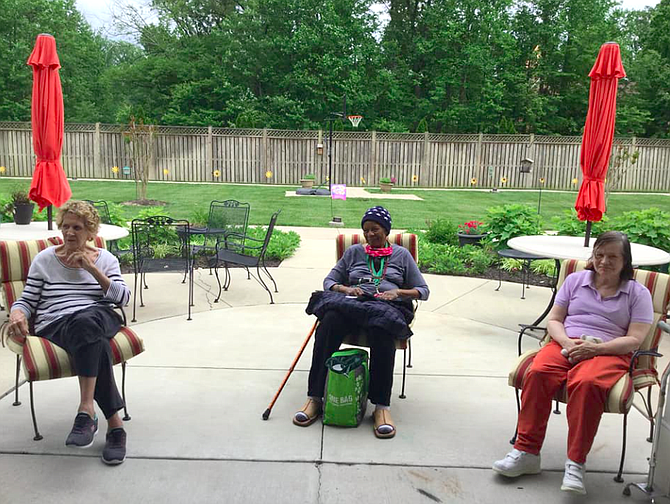 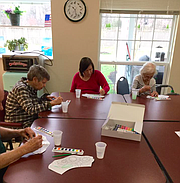 Tyler Przybylek’s wife, Marilyn, is a resident of Great Falls Assisted Living (GFAL), a dementia-care senior living community. But Przybylek’s regular visits to GFAL don’t begin with a hug or kiss, like they used to. The couple now chats through a slightly opened window: his wife inside the building, Przybylek outside.

“Socially distanced visitation is very difficult,” Przybylek wrote in an email to The Connection. “Marilyn and I have been married 47 years and not having the ability to hug her and touch her and walk with her hand in hand is hard. I cannot take her to lunch or dinner and cannot [take her to in-person] doctors' appointments.”

Przybyłek was worried that the social isolation necessitated by the COVID-19 outbreak would cause a precipitous decline in his wife’s cognitive function. So far, he has noticed a small decline, though not as steep as he feared. Above all, he emphasized his gratitude to GFAL: both for its compassionate care and for its security amid the pandemic.

As the COVID-19 outbreak rages on, senior living homes have taken extraordinary measures to protect the vulnerable populations they house. Sheetal Patel, Executive Director of GFAL, described the building’s current situation as a “lockdown.”

GFAL, which is managed by Artis Senior Living, has developed a meticulous cleaning regimen through weekly phone calls with doctors at Johns Hopkins University. Amy DePreker, Vice President of Sales and Marketing for Artis, said that these measures go beyond the CDC’s standard recommendations. All staff members wear face shields in addition to masks; they plan to conduct ‘surveillance testing’ for COVID-19 if the local incidence rate exceeds 15 percent; and the facility does weekly ‘electrostatic disinfecting,’ which according to GFAL leadership keeps all of the building’s indoor surfaces disinfected for eight days.

So far, DePreker said, these measures appear to have been effective, as the residents of Artis’ senior living homes currently have a less than 1 percent positive test rate for COVID-19.

Still, implementing certain measures has proven to be a challenge in the dementia care community. Initial public health guidance recommended that residents stay in their own bedrooms: a task that the GFAL staff found “impossible.”

“They honestly believe this building is their home. And if this is their home, why are you keeping them in their bedroom?” Patel said, narrating a resident’s thought process.

Some residents have also been resistant to wearing a face shield, finding the practice confusing or uncomfortable. As a result, staff members have put extra effort into maintaining social distancing among residents.

The initial social distancing measures also took a steep emotional toll on some residents, Patel said; some did not understand the situation, and many missed their usual social events and other comforts.

GFAL has in recent months resumed events that reduce this emotional strain. They now allow families to do either outdoor visits or “window visits,” where residents speak with their loved one on either side of a slightly opened window. Artis has also purchased iPads for residents to stay in touch with their loved ones via video communication services such as Zoom.

DePreker expressed dismay over how the restrictions of the pandemic, even if necessary, have limited residents’ freedom.

“Our whole belief is, instead of saying ‘no,’ we say ‘yes.’ We say ‘why not,’ when other people are saying that they can’t. And that shifted; it was a change to our whole philosophy as a company,” she said. “They have the freedom within our communities; and that freedom went out the window...It was for the safety of our residents, but trying to get them to understand that was impossible.”

“When it was the peak time for COVID in the county, it was really hard for them,” she said. “But recently, they’ve been doing great. What we’ve been doing, and how we’ve been adding those outdoor visits with family members, they’ve perked back up. There are smiles on their faces now.”

In fact, DePreker said, for all its difficulties, residents’ memory impairment may have softened the blow of the pandemic.

“There’s a curse and a blessing to dementia,” she said. “For many of our residents, there’s confusion as to time. I think that has helped them cope better, strangely enough.”