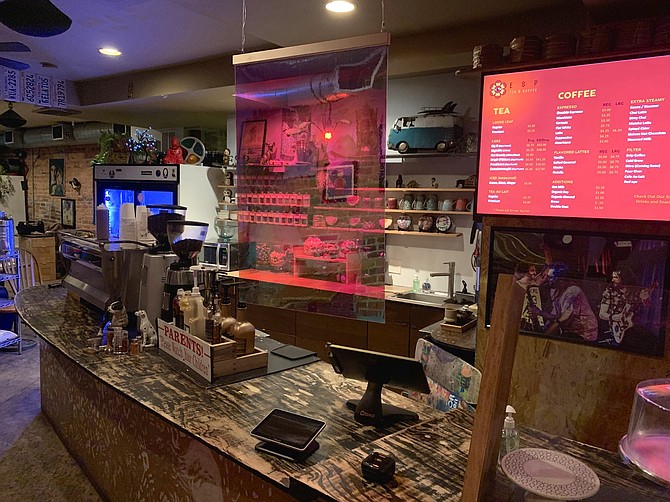 About two months ago, King Street saw the rebirth of a familiar coffee shop with a renewed name, all set to rise from the ashes. ESP Tea and Coffee at 1012 King Street is the phoenix in question, back on the scene with new ownership, some familiar faces in day-to-day operations and the same comfortable surroundings that had drawn so many customers in years ago.

Muendel has rescued ESP because he enjoyed going there so much.

“I very selfishly interjected myself … because I didn’t want (ESP) to go away,” he said.

“I don’t blame people for being skeptical. It’s very natural,” Muendel said, adding that he only knew Shelton from brief conversations inside the café. “I’ve never even seen him outside of our block.”

Shelton drew controversy last year in the wake of allegations of harassment by former employees and some politically charged posts from the shop’s Twitter account. But he is no longer involved in ESP. Muendel says that other than occasionally seeing one another in the coffee shop, there is no relationship between the two.

WITH THAT out of the way: It’s time for tea.

Whereas most cafes in Alexandria are coffee-forward, Muendel is looking to flip the script a bit at ESP to give tea top billing. He’s starting with Puerh tea, sourced from one vendor in Yunnan Province, China, and served largely in cakes rather than loose-leaf. Selections range in flavor from citrusy orange peel, to a bitterness that is almost like a cooking chocolate, to a smooth variety, to an earthy tone.

“It’s a really good product for the shop and a really unique offering,” he said.

For Muendel, the entire concept of owning a coffee and tea shop is a new endeavor. The founder of Brightline Interactive https://brightlineinteractive.com/, this is his first time in the food and beverage industry. Thanks to both his business experience and some reliable hands-on help, he’s learning quickly.

“It’s been great. I’ve never run a restaurant or retail shop, but I’ve been in business for myself since I was in college. I have a lot of friends in the restaurant industry who are owners, and I’ve also been a part of CEO groups, and there’s been a lot of restaurateurs in those groups,” he said.

And he also has Maggie Maido on the team as general manager. Maido worked at Killer ESP before the COVID-19 pandemic and is back working with Muendel, handling the daily operations, from running the shop to hiring the staff to training the team.

“It would not be working if Maggie wasn’t in place,” Muendel said.

WHILE THE biggest menu difference in the new shop is the focus on high-end tea (coffee lovers, take heart: There’s plenty on the menu for you as well), customers will also notice some changes within the building itself.

“I took a lot out and I put a lot of new artwork in. I have a passion for photography, I do a lot of band photography, and something I always thought was great about the space was the music. So there’s a lot of new photography, a lot of accent lighting I’ve put in,” Muendel said. He’s also removed about half of the interior furniture to keep the area spaced-out in the face of the pandemic.

As locals find their way back in, Muendel says he’s looking forward to getting more entrenched in the community – with tea, with coffee and with some charitable events, including the upcoming Spring2Action citywide drive.

“I’ve enjoyed it, I’ve really enjoyed it so far,” he said.