GFCA and Fairfax County plan to protect against light pollution. 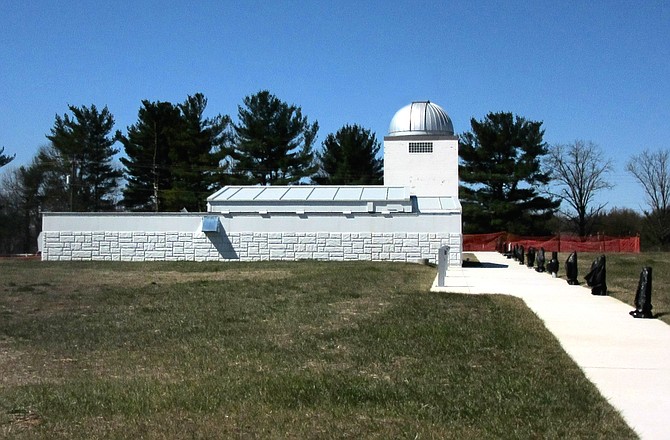 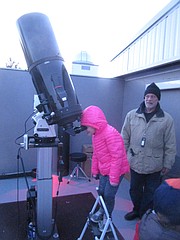 A child sees the stars, bright planets, and constellations through the lens of the telescope.

A clear night sky offers those who look through the telescope a view of the stars, constellations, and planets the naked eye cannot see alone.

This past Feb. 11, with GFCA’s urging, Foust amended a motion during a County Board of Supervisors Meeting to review additional zoning provisions to protect dark skies around astronomical facilities be included in the Zoning Amendment Work Program either as part of a green initiative or a stand-alone amendment. Foust added a friendly amendment to place it on the Program’s Priority One List. The motion carried.

AT GFCA’s SUGGESTION, a Dark Sky Preserve Amendment to the Zoning Ordinance is being developed by the Fairfax County zoning office. The amendment includes a one-half-mile radius around the Turner Farm Observatory Park open to view the stars at 925 Walker Road in Great Falls. Documents for an Urban Night Sky Place application are also underway, according to Winnie Frost, co-chair of the Environment & Parks Committee (EP) at GFCA. “These two initiatives, if supported, will create a dark sky reserve in our community for learning about astronomy and how our night skies are important,” Frost said.

“On July 12, members of GFCA’s Environment and Parks Committee (EP) met with county officials and the Analemma Society at Observatory Park on Turner Farm to discuss protecting the dark sky around the Observatory,” according to Frost. Fairfax County Park Authority holds the deed to the property. It is preparing a nomination for the area as International Dark-Sky Association [IDA] status.

Jeffery Kretsch is an amateur astronomer with the local astronomical nonprofit the Analemma Society, based at the Observatory Park. He said that the importance of the dark skies to Observatory Park at Turner Farm was obvious, “…an improved ability to present astronomical objects like other galaxies to the public.”

However, light pollution is increasing there. Outdoor lighting can be poorly targeted. It can spill into the sky rather than on areas people want to be illuminated, or it can be overly bright. On Monday, Aug. 16, 2021, Kretsch said in an email to the Connection that the main thing he sees in the Dark Skies initiative is educating the public about the impacts of light pollution on things like health and wildlife as well as astronomy.

“Smarter means of lighting can provide both better health and safety while protecting wildlife and improving our observing prospects,” Kretsch said. “A partnership with the International Dark Skies Association will provide greater knowledge for doing this,” he said.

“Artificial light at night has revolutionized the way people live and work outdoors, but it has come at a price,” said Frost. “When used indiscriminately, outdoor lighting can disrupt wildlife, impact human health, waste money, and energy, contribute to climate change, and block our view of the universe. The good news is that the artificial lighting at night is fixable with using proper lighting fixtures that face down to the ground where it’s needed, versus up to the sky,” she said.

THE ANALEMMA SOCIETY was formed in 1998 dedicated to supporting the adaptive reuse of an old Nike missile building and site located on farmland in Great Falls deeded to the Fairfax County Park Authority (FCPA) by the Department of Interior in 1999. The Society planned to reuse the structure and site for another purpose, to develop what it is today, Observatory Park at Turner Farm Park.

In 2019, Kretsch wrote “The Making of the Turner Farm Observatory,” featured in Sun &Telescope. In one of Kretsch’s last lines in the story, he says, “…The site is no longer as dark as it was once, thanks to local population growth.”

Learn more about how light pollution wastes resources, how to conserve energy and use night lights efficiently at the Analemma Society website at https://www.facebook.com/Analemma-Society-123715211042795.