‘The County’s in Dire Need of these Kinds of Facilities’ 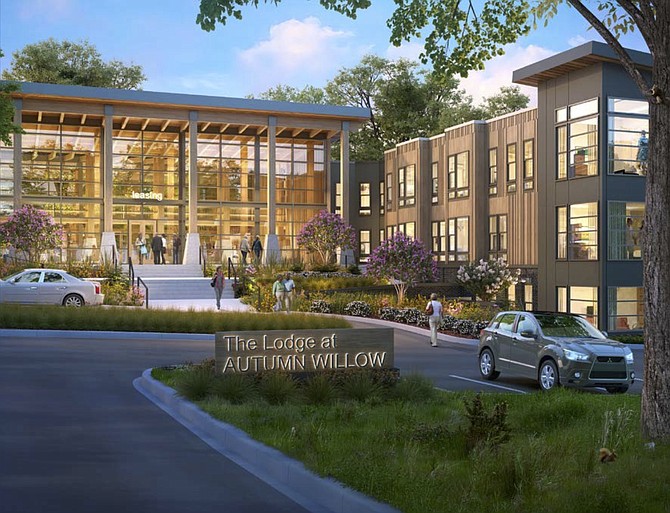 Artist’s rendition of The Lodge at Autumn Willow in Centreville.

There’s good news on the horizon for local senior citizens looking for affordable housing. Some 150 independent-living units are being proposed at the intersection of Stringfellow Road and Autumn Willow Drive in Centreville.

The wooded, 20.5-acre site comprises two parcels south of Autumn Willow. And the project is being planned by the Michaels Development Co., in conjunction with the Fairfax County Redevelopment Housing Authority (FCRHA), which owns the property.

“We’re calling it The Lodge at Autumn Willow,” said architect Ben Kasdan. “The idea is to allow the residents to live in a lodge within this beautiful, natural setting. The proposal includes a basement-level, gathering spot at the end of each residential wing. And there’d be an accessible ramp leading to the front entrance.”

Among the amenities is a courtyard envisioned as a reading cove and recreation area, as well as a trail. And new, widened sidewalks are planned along Autumn Willow, where the entrance would be. The building exterior would be a combination of brick and siding.

THE SITE is located near two fire stations, a hospital and shopping areas. Michaels representatives first presented details of the project to the joint meeting of the Sully District Council (SDC) and the West Fairfax County Citizens Assn. (WFCCA) Land-Use Committee in September, returning Jan. 18 with an update.

At the first meeting, Nick Bracco, representing the applicant, said the senior apartments will be restricted to people earning 60 percent of the Area Median Income (AMI) and below. So, he explained, the cost would be “$50,000-$60,000 for two seniors moving into a two-bedroom unit together.” He said they hope to break ground in early 2022.

After the presentation, Jeff Parnes, the SDC’s first vice-president, was pleased with what he heard and told the applicant, “I think this will be a benefit to the community. I wish you the best.”

However, members of the joint land-use committee had a few suggestions to improve the plan. They recommended the building’s front entrance be covered to protect arrivals from rain and excessive heat. And they also wanted Michaels to make it easier for the facility’s residents to travel on foot, east and south of the property, to get to nearby retail uses.

At the Jan. 18 meeting, attorney Brian Winterhalter, representing Michaels, said the proposal is scheduled to go before the county Planning Commission on Feb. 3 and the Board of Supervisors on Feb. 23. He also noted that county staff is recommending approval and then listed the changes that have been made to the initial proposal.

“Since our last presentation, we’ve increased the amount of tree preservation in the courtyard and have committed to using natural and native landscaping,” he said. “We reduced the number of parking spaces from 150 to 135, which also reduces the amount of impervious surface on the site. And we plan to channel the water [runoff] in as environmentally sensitive a way as possible.”

This will be accomplished via two, bioretention basins on the property to maximize phosphorus removal through treatment. More than 85 percent of the water from the impervious area is to be treated by a water-quality facility.

In addition, Michaels added a canopy to the front of the building so there’ll be a covered walkway for drop-offs and pickups. “The canopy was a really good idea,” Winterhalter told the land-use panel. “Thank you for your suggestion.”

Furthermore, he said, “We took another look at the trail connection, and there’s an existing trail running west to east that will be maintained in place on this property. That way, people can head east without encroaching into the resource protection area.” He also said the applicant has met with several homeowners’ associations about this project, as well as with land-use groups in both the Sully and Springfield districts.

REGARDING THE DECREASE in parking spaces, SDC’s Lewis Grimm asked if 135 spaces would be “sufficient to cover the expected demands of residents, visitors and staff.” Winterhalter said yes and added that people could park on Autumn Willow, too.

Resident Jehanne Arslan asked how the stored water would be released from the site. Engineer Steve Gleason, with Gordon & Associates, replied, “When the water in the bioretention area reaches capacity, it will be conveyed through a storm-sewer line to the creek.”

The joint land-use committee then told Winterhalter it had no objections to this project. “The county’s in dire need of these kinds of facilities,” said WFCCA Land-Use Chairman John Litzenberger. “So we encourage this type of development.”