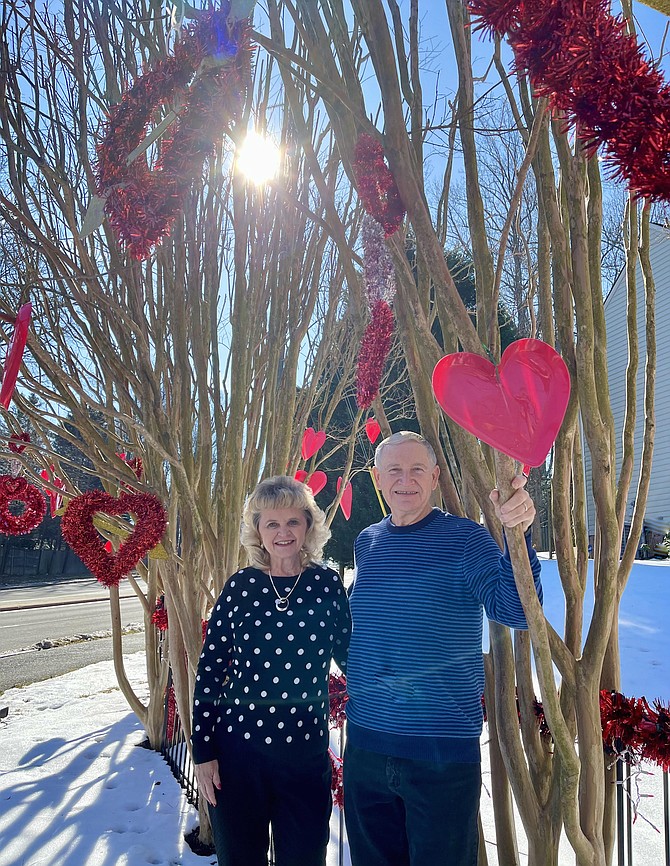 Drivers traveling on Lee Chapel Road in Burke are reminded that Valentine’s Day is upon us, thanks to Larry Gould’s eye-catching red heart garden ornamentation.

Retired federal employees, Gould, assisted by his wife Jan, regularly decorate for Cupid’s day, and every other major holiday, with four themed displays for months without major celebrations. His ornamentation is displayed on the lawn and front entry of their corner property, visible to travelers from the busy Burke thoroughfare. They have been decorating for seven years; and people have noticed.

Larry Gould says many people stop, bring children, take pictures, and thank them for their efforts. Some have left letters in the Santa’s mailbox, when included in their Christmas decoration. The pair often dresses as seasonal characters, such as Mr. and Mrs. Claus, Uncle Sam, and the Easter bunny, giving out candy to those who stop for a closer look. Jan relates that she was once concerned to see a police car arrive and was prepared to explain they were not operating without a business license, just giving away treats. As it turned out, she said, the police officer too wanted to take a picture of the display with her cell phone.

The “Williamsburg style” of holiday decorating outside with natural plants and fruits actually started in the 1930s. Philanthropists J. D. Rockefeller and Reverend William Goodwin, who were restoring the colonial town, wanted to create a “festive spirit” for tourists who had begun coming to see the town. The style now is often copied throughout the country.

The Goulds in modern day Burke may not have considered the history of garden decorations when they started their tradition with a goal to delight passers-by. But, as one of their neighbors shared, with all the traffic on Lee Chapel they surely have brightened thousands of lives every day. The Goulds’ monthly displays can be seen at the intersection of Lee Chapel and Holly Prospect Roads, between Old Keene Mill and Fairfax County Parkway.