As the South County area grows, facilities are needed to meet the demand. 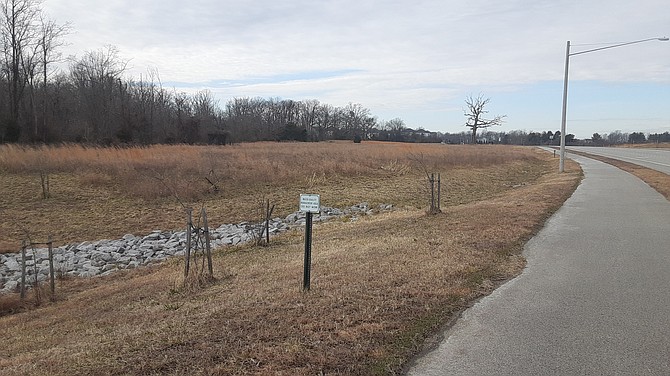 This parcel of land near the Workhouse Arts Center in Lorton will be home to the new police station. Photo by Mike Salmon.

The Lorton-South County area will take another step away from being in the country when the future South County Police Station and Animal Shelter is built on a parcel of land on Lorton Road, just east of the Ox Road intersection. This area of the county is now patrolled by units from the Franconia and West Springfield District Police Stations, which are some distance away, so the additional police station will allow the department to organize smaller patrol areas and decrease response times throughout the county, Fairfax County said.

The new station will be in the Mount Vernon District, which is under Supervisor Dan Storck, who has been behind the project since the early days when the money was allocated for the station in 2015. Construction on the project should begin in March, but due to COVID restrictions, Storck’s office is holding off on the groundbreaking ceremony with the community until later this year.

The new facility includes an approximately 34,000 square-foot police station and an approximately 23,000 square-foot animal shelter, the county said. The station includes space for the Animal Protection Police and a community room. The site will also include 20,000 square-feet of outdoor space for the animal shelter, a fuel island to support fleet vehicles, and associated parking. There will be a need for 15 new officers to run the station.

Funding for the South County Police Station and South County Animal Shelter was approved in the 2015 Public Safety Bond Referendum that was $151 million. Citizens voted overwhelmingly to approve the needed projects (74.5 percent voted yes). The new facility is projected to cost $30 million to design and construct.

In a presentation the county made to a citizen group in June 2018, they talked about an 8-member steering committee that was involved from surrounding HOA's, So Co HS and So Co Federation. Money from Nov 2015 Public Safety Bond Referendum, 2013 Police Master Plan. In site selection, there were 6 county owned sites looked at from around that area. Facilities will be similar to the size of other county buildings that house similar entities, and there will be a community room. One plan has three access entrances off Lorton Road and one access from Workhouse Road.

The planners are looking at a "cut-off lighting" plan to "reduce impacts of glare, light trespass and overlighting," while still offering safety and energy conservation, it states in the presentation. In the artist renderings, the design influences on the brick buildings and pitched roof are similar to the existing Workhouse buildings, which were originally the Lorton Prison, built in the 1930s. Construction was originally planned to start in 2020 and end in mid 2022, but with the pandemic impacts on the schedule, the construction contract has recently been awarded to Forrester Construction and construction should begin near the end of this month, the county said.

The parcel of land borders Workhouse Lane on one end, and has a portion sectioned off, which is labeled as historically significant on the county website. It is part of the historic overlay district related to the Lorton Prison. There is a historic house on the property, noted as the historic area, that was the Physician’s house that served the Lorton Prison.