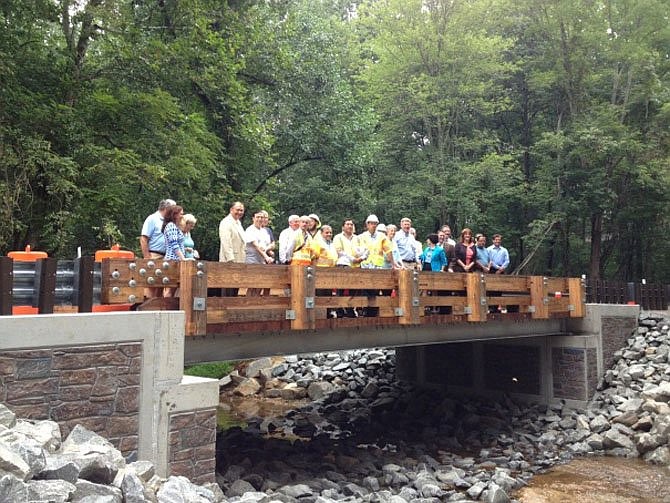 It could be déjà vu back to 2013 for the Springvale Road Bridge. Then, neighbors, elected officials and VDOT staff stood on the new single-lane rural rustic Beach Mill Road Bridge over Nicholas Branch in Great Falls. Connection file photo 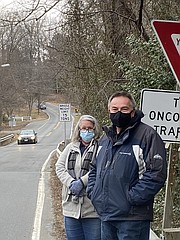 Jennifer Falcone and John Halacy, members of the Springvale Road Working Group of the Great Falls Citizens Association, stand with their backs to the single-lane Springvale Road Bridge, leading to a sharp left turn.

Policies passed down to state levels encouraging single-lane deteriorating bridges to be replaced with two-lane bridges because of purported safety concerns are once again at the forefront for discussion between the Great Falls Citizens Association, community members, Fairfax County Supervisor John Foust (D-Dranesville District), and the Virginia Department of Transportation. At issue is the 22 feet long, 19 feet wide, single-lane Springvale Road Bridge built in 1932. To some, it contains cultural value, community heritage, and other more tangible attributes. To others, it is an obsolete structure that needs to be replaced with a two-lane bridge. The dichotomy sets up a complicated situation.

The Springvale Road Working Group of the Great Falls Citizens Association met on Feb. 9. Their purpose was to prepare for the upcoming Feb. 25 Town Hall on the Springvale Road Bridge Replacement by the Virginia Department of Transportation (VDOT). Supervisor John Foust (D-Dranesville) requested that GFCA provide him feedback on the community's position to replace the current deteriorating bridge with a larger two-lane structure.

The Town Hall is an opportunity for the Great Falls community to speak to preserve the one-lane bridge design or build it out with a two-lane structure, according to Jennifer Falcone, the meeting moderator.

It also provides GFCA members with a chance to describe what they see as drawbacks to VDOT's proposal, identify the impact of what they consider will be more traffic in the village, and the effect on Georgetown Pike. Falcone said that the town hall's format would differ from other slide-heavy VDOT presentations.

"Instead, we will provide attendees with key points of view on both sides of the issue. We will also set aside time for the attendees who have pre-registered to speak on the subject, and we will respond to written questions submitted during the meeting," Falcone said. Comments are limited to three minutes. John Halacy, the Springvale Road Bridge Working Group coordinator, will line up positions and the critical points of the group's efforts, followed by the principal representative of VDOT, offering VDOT's rationale. Supervisor Foust will also speak during the meeting.

Henry Lippincott brought forward his findings. Unable to identify similarly contested one-lane vs. two-lane bridge issues in Virginia, he turned to national data. In Ohio, a replaced two-lane bridge resulted in "worrisome traffic speed," a similar concern for the GFCA working group. Another trend Lippincott found interesting in conversations he had with the Department of Transportation was "disingenuous statements" such as "a two-lane bridge will increase safety."

Lippincott said the responsibility should be on VDOT to prove a two-lane bridge won't increase traffic, safety hazards, and speeding "because it defies logic."

John Halacy questioned if a two-lane Springvale Road Bridge would instead just be "moving a bottle-neck at the one-lane bridge and dumping it on Georgetown Pike and are we enticing people to go to Georgetown Pike."

Bill Canis considered the "tenor" of the meeting. He cautioned word choices would influence the meeting's tone.

Dennis Huber said another question to consider would be accident rates as they move from a one-lane bridge to a two-lane bridge. "If you've got good data, that would be great to bring to the front."

Halacy said they had accident data VDOT gave them on bridge-related. data spanning the past 19 years.

Candice Burt reminded the working group of the 2013 single-lane rustic replacement bridge over Nichols Run on Beach Mill Road. It demanded that she question VDOT's number of cars per minute and the number of accidents on the bridge. She got the police report for accidents. "It never was on the bridge," she said. Burt spoke of her advocacy that the original bridge's single-lane configuration be retained to slow down and discourage cut-through traffic along Beach Mill Road.

"It wasn't easy, and I was panicked that it was going to be something else. But you know we stuck our ground, and in the end, VDOT was so pleased because our design bridge was one of the first in the area...We wanted a wooden deck… We wanted to keep it in the character of Great Falls."