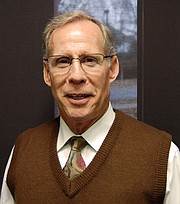 McLean Community Center (MCC) Executive Director George Sachs is announcing his retirement effective Friday, May 7, 2021. At the time of his retirement, Sachs will have served as the executive director at MCC for 11 years (2010-2021). The MCC Governing Board will be conducting a national search for his replacement with hopes of identifying his replacement by the end of March 2021, to allow time for a transfer of institutional knowledge from Sachs to the new director.

Sachs said during his tenure, “There was never a dull moment or lack of challenges.” Among them was his successful leadership of the recent renovation and expansion of the center’s 40-year-old Ingleside Ave. facility. The five-year, $8-million-dollar project involved securing an architectural firm to design and plan the renovation, working with Fairfax County staff to secure contracted services, closing the center for two years and relocating programs and services, and the entire MCC staff to four separate locations in McLean, overseeing the construction from beginning to end, returning programs and staff to the facility upon the renovation completion and creating a new slate of programs and services in the newly expanded facility.

Sachs’ career in the Recreation, Parks and Leisure Services profession started in 1974, when he was hired as a Recreation Specialist with the Fairfax County Department of Recreation. He later was hired by the Fairfax County Park Authority and opened the first RECenter at Wakefield Park, now named Audrey Moore RECenter. He left the county in 1982 to open the new Fieldhouse Sports Complex at George Mason University and managed the university’s recreation and sports facilities. While there, he also became an adjunct professor for the Department of Parks, Recreation and Leisure Services. In 1991, he was hired as the Deputy Director of MCC under Executive Director Page Shelp. Four years later, he moved to South Carolina, where he owned and operated what grew to be a chain of five recreation, health and fitness centers.

Sachs returned to Fairfax County in 2009 and was hired to manage MCC’s Old Firehouse Teen Center. A year later, the MCC Governing Board appointed him the community center’s new Executive Director.

At age 70 George has decided to enter his next phase in life, retirement, and plans to now become an active participant in a variety of programs and activities similar to the ones he has been directing for the past 47 years of his career.